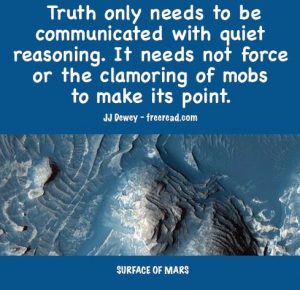 The law of Karma is the Law of Cause and Effect. There can be no cause unless there is a corresponding effect for that is what a cause is. The first definition of a cause in The American Heritage Dictionary is: “The producer of an effect, result, or consequence.”

The same dictionary gives as the first definition of effect as: “Something brought about by a cause or an agent; a result.”

Now some have said that Karma, or the Law of Cause and Effect, can be negated or eliminated.

Some say that it only exists because we are attached to it or because we have judgment within us. Others say that we merely must rise above the illusion of this world and Karma will cease.

Do you realize what it would mean to escape karma to the extent that karma would no longer exist?

DK through Alice A. Bailey tells us that the Masters do not eliminate the Law of Karma. Instead they learn to “wield the law.” In other words, they create causes so the effects that result are desired effects rather than undesirable ones. In this way they are free from unpredictable karma. In other words, they are no longer victims of the law as regular humanity is.

A regular human in his use of karma is a little like a novice going to Las Vegas to gamble at blackjack. The odds are against him because he does not understand the game and does not realize that because of his ignorance the longer he plays the more he will lose. He who learns to master karma is a little like the master gambler who learns how to count the cards which will give him control over the game. In both cases the law of cause and effect is in full force, but in the latter case the Master Gambler uses the law instead of being used by the law.

Is cause and effect only applicable in the worlds of form?

Answer: It would have to be applicable in all worlds because the worlds of form are an effect of energy which was an originating cause before the worlds were created.

In the beginning there was God and God Itself was a cause and creation is the effect. Thus the first act of the invisible God was the exercise of cause and effect.

To those who say they can exist apart from karma, let me put forth this challenge.

I can show you billions of examples of karma (cause and effect). But can you show me even one example of anything that is real that creates no cause and effect? It takes a tremendous leap of faith to believe so strongly in that for which no example can be given. Why would someone believe in a place beyond cause and effect if such a place cannot be demonstrated internally or externally??? You can in deep meditation attempt to withdraw into perfect stillness, but even this meditation (cause) has the effect of peace or stillness of thought.

Not only does logic, experience and the Law of Correspondences bear witness to the eternal existence of cause and effect but all the writings revealed by the teachings of the Masters as well as the scriptures agree.

“For every man shall bear his own burden. Let him that is taught in the word communicate unto him that teacheth in all good things. Be not deceived; God is not mocked: for whatsoever a man soweth, that shall he also reap. For he that soweth to his flesh shall of the flesh reap corruption; but he that soweth to the Spirit shall of the Spirit reap life everlasting. And let us not be weary in well doing: for in due season we shall reap, if we faint not.” Gal 6:5-9

Note here that Karma extends beyond the physical for it says: “He that soweth to the Spirit shall of the Spirit reap life everlasting.”

From The Book of Mormon:

“For it must needs be, that there is an opposition in all things. If not so, my first-born in the wilderness, righteousness could not be brought to pass, neither wickedness, neither holiness nor misery, neither good nor bad. Wherefore, all things must needs be a compound in one; wherefore, if it should be one body it must needs remain as dead, having no life neither death, nor corruption nor incorruption, happiness nor misery, neither sense nor insensibility.

Note that without karma, cause and effect there would be no creation, no you and me and no God for God is the First Cause, the first agent of karma.

A Course In Miracles:

“If I intervened between your thoughts and their results, I would be tampering with a basic law of cause and effect; the most fundamental law there is.” Text Pg 27

“Think not you understand anything until you pass the test of perfect peace, for peace and understanding go together and never can be found alone. 5 Each brings the other with it, for it is the law of God they be not separate. 6 They are cause and effect, each to the other, so where one is absent the other cannot be.”

“ Nothing can have effects without a cause, and to confuse the two is merely to fail to understand them both.” Text Pg 420

“As I write this instruction I would call your attention to the subject of karma. There comes ever in the life of a disciple and in the soul’s experience some one particular life wherein the Law of Cause and Effect assumes importance in the consciousness. From that life and that moment, the disciple begins to deal with karma, consciously and definitely. He learns to recognize it when events and happenings come which require understanding and which evoke questioning; he begins to study the quality of his radiation as a karmic agent, and therefore he becomes the maker and constructor, in a new and important sense, of his own destiny and future. His reactions to life and circumstances cease to be simply emotional in nature and become deliberately dictated by conscious observation; they then have in them a significant quality of preparation which is absent from the life of the average man. For the remainder of this life, therefore, I would ask you to carry the theme of karmic decision and of preparation for the future ever in your consciousness; I would ask you always to take action with as full an understanding of the probable following effects as you can manage to achieve, and to make a real effort to study the Law of Consequence and Compensation.”

“It is not my intention to explain or elaborate the subject of Karma. This occult yet fundamentally exoteric theme, the Law of Cause and Effect, evokes a general recognition when called by this name. When called the Law of Karma, it is immediately regarded as mysterious, Oriental and new. Called (as it sometimes is) the Law of Retribution, an entirely erroneous connotation has become attached to it. Today, the karma of humanity is descending upon it. I would remind you, however, that the continuous emphasis laid upon the malevolent aspects of karma conveys a wrong impression and negates the full grasp of the truth. There is as much good karma as there is bad; even in the present world situation, the good karma emanating from the soul of humanity balances the evil which comes from the material aspect and is continuously over-emphasised. It is the rhythm of matter in contradistinction to the rhythm of the soul, and these constitute the initiating causes of the present conflict, both in individual lives and in the general world situation. When this is properly grasped, the true picture may emerge in your hearts and minds with greater clarity.”

“A steady endeavour to see the reality in every form. This literally involves a study of the law of cause and effect, or karma, the object of the karmic law being to bring the opposite pole of Spirit, matter, into strict conformity with the requirements of spirit so that matter and form can perfectly express the nature of spirit.” Discipleship in the New Age, Vol II, Pages 538-539

JJ: DK goes on to tell us that the earth is not a sacred planet because Sanat Kumara himself is somewhat of a rebel from a cosmic point of view and has some effects (karma) that he must deal with before the planet can take the needed initiation.

Even high entities who have learned to use the law of karma in a positive sense cannot let their guard down, for one of the Kumaras that came to the earth with the Ancient of Days (called Lucifer by Christians) fell from his lofty station when he did not wield the law with wisdom.