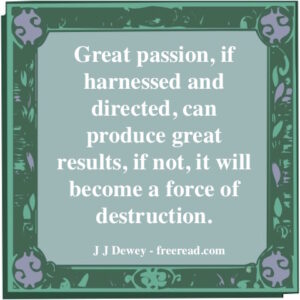 The Passion of God

“And I saw another sign in heaven, great and marvelous, seven angels having the seven last plagues; for in them is filled up the wrath of God.” Revelation 15:1

Again, the disciple who follows the path of Christ looks to heaven or higher consciousness and finds another sign, or greater realization. He sees seven angels having the seven last plagues. It is noteworthy that these are the last plagues, or difficulties the disciple must surmount while connected with physical reality. The fact that the seven angels are in heaven tells us that the disciple has mastered all the energies, which govern his body and life. His physical impulses, his feelings, his love, his creativity, his will and all that makes him human is in heaven, or under the control of spiritual consciousness.

”…for in them is filled up the wrath of God.”

The disciple must face seven final difficulties that will activate a powerful fiery passion within to continue, no matter what, toward the realm of Spirit.

Now many do not see God as having passions neither do they see Christ or a close disciple as having them, but such is not the case. It is true that we must master our desire nature, which includes our passions. This involves correct detachment, but lower passion is replaced by higher passion.

Jesus demonstrated great passion when he cleared the bad guys out of the temple. Concerning his act of turning over tables and whipping the moneychangers it was written, “The zeal of thine house hath eaten me up.” John 2:17

In other words, Jesus was acting out a powerful passion. Even so, will the disciple at the end of his journey pursue his final steps toward liberation with great internal passion, and, unlike the lower self, one that is one hundred percent under his control and directed with intelligence.

In chapter four we learned that the sea of glass was before the throne of God. Here we have the additional piece of information that those who have achieved victory over the beast stand on this sea of glass. These have the “harps of God.”

First contrast a sea of glass to a regular sea. With a regular sea one cannot peer into the depths of the water for the water is never clear. But glass is clear and if we were to look into this we could see the mysteries within all the way to the bottom.

Secondly, you cannot stand on a regular sea, but the redeemed stand on the sea of glass.

The sea represents the emotional nature and until the passions are brought under the control of “heaven” there are stormy feelings, mists, rain and the water is never clear. One can never see clearly into it, nor can he master it to the extent that he can stand on it. One who has not ascended to heaven in consciousness has to have the outward support of a ship to navigate its surface. Our current ships are our friends, family, support systems, psychologists and others who help keep us emotionally stable.

One whose consciousness has ascended, quiets and stills his emotional body so all storms cease, all impurities separate and what remains is a crystal clear emotional body that yields divine passion to the disciple. His light and knowledge is increased and he can use his passion to see with extreme clarity. The fact that the redeemed “stand” on the sea of glass illustrates dominion over the emotional/desire nature.

We notice that this victory not only belongs to the disciple having the vision, but the entire redeemed stand upon this sea having the harps of God. This tells us that the disciple who ascends in consciousness and sees this sign opens a door of communion and has an inner contact through the Oneness Principle with others who have gone on before him. Through a merging of the minds, they enjoy the “music of the spheres” as if they were one life.

“And they sing the song of Moses the servant of God, and the song of the Lamb, saying, Great and marvelous are thy works, Lord God Almighty; just and true are thy ways, thou King of saints. Who shall not fear thee, O Lord, and glorify thy name? for thou only art holy: for all nations shall come and worship before thee; for thy judgments are made manifest.” Revelation 15:3-4.

As the disciple faces the final seven difficulties, he sings two songs that give him strength.

The first is the song of Moses. This is not quoted in Revelations but is found in Exodus 15:1-19

This was a song of faith sang by Moses after the Israelites had crossed the Red Sea and the Egyptians destroyed. The Red Sea was not clear but it was parted and controlled by God to insure safe passage.

The second is the “song of the Lamb.” Again, this emphasizes the power, goodness and righteousness of God.

Absorbing the meaning from these songs gives the disciple the power and faith to tread the path ahead to ultimate victory.

Here are the next verses for consideration”

“And I heard a great voice out of the temple saying to the seven angels, Go your ways, and pour out the vials of the wrath of God upon the earth.” Revelation 16:1

In verse five above, the temple of the tabernacle is a name for the tabernacle that the Israelites carried about in the wilderness in the days of Moses. What is significant in this being named rather than the temple in Jerusalem?

The Glory of God manifested in the tabernacle and it also contained the Ark of the Covenant, which contained the true laws of God. It is interesting to note that the presence of God was much stronger in the crude portable edifice carried about in the wilderness than it ever was in the beautiful and polished temple. In addition, the ark was lost and was not in the temple. The holy place in the temple in the days of Jesus was empty space.

What does this tell us? It tells us that if we want to enter into the presence of God, receive revelation and knowledge of principles, or the laws of God in the Ark of the Covenant, that we need not look in beautiful churches or temples. Instead, we can find God in the wilderness, in the desert, in a humble abode and can find him as we move from place to place as did the ancient Israelites. We may dream of the land of Canaan (heaven), flowing with milk and honey but the closest we will come to God will be as we struggle in the deserts of life. It is the fruit of the struggle that brings the glory of God and the understanding of the true principles within the Ark of the Covenant in the human heart.

In verse six above, their clothing and the golden girdle fits the description of the dress of the high priest who was able to enter the Holy of Holies where the ark was found. If the disciple looks into the holiest place within the human heart, he will find the high priest that mediates between him and God. The higher part of his nature is that high priest and when he gives himself permission, he opens the door to the holiest place and reads the laws or principles of God.

The inner high priest, which is one, has seven expressions or aspects, symbolized by the seven angels that govern the seven basic streams of energy expressed through the seven chakras.

In verse seven above, notice that one of the four beasts gave the seven angels the golden vial. Which one? John does not say but undoubtedly it was the one that had a face as a man, a symbol of the approaching age of Aquarius and the symbol of mind. Mind and reason, linked to Spirit, dictate the passion of God that stirs within and decides when it is to be released.

Notice that the passion of God is contained with “golden vials.” Gold is a symbol of purification through struggle and advancement obtained by great trial. The disciple contains and controls the passions within, with golden thought and pure intent. The time has come to release with passion the final work, which will bring liberation to himself and others.

Verse eight tells us when the decision was made to move ahead with the final work, which will use all his spiritual energies, the disciple senses the glory of God manifesting within the core of his being. He knows he is doing the right thing, but a cloud or smoke seems to obscure his vision of the entire purpose. He proceeds forward with faith knowing more will be revealed later.

He now must not turn back and enter into the peace of the inner temple. He now enters a cycle of labor that may cause much outward disturbance. There is a cycle of dwelling within and seeking the inner presence and there is a time to manifest it outwardly. Now is the time of outward manifestation that will be as a plague to those who are not prepared and set in their ways.