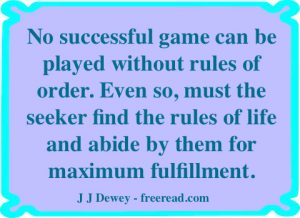 The Needs of the Many

The correct use of law requires wise application of the pendulum principle that we previously discussed. Both extremes in their misuse lead to disaster.

While I do believe that we have too many laws and that about 90% of them could be eliminated it is also very true that society could not exist in a civilized state without law that protects the rights of the many.

The body or state therefore has the right to make laws governing our roads and driving because all members of the body are affected by vehicles and transportation.

On the other hand, the state has no right to make laws governing what you read or the literature you have in your home because that only affects you.

The body or state has the right to make laws governing zoning and building permits because where you build and how you build affects the property value and enjoyment of your neighbor and the whole community.

On the other hand, the state has no right to make laws governing the decor and colors of the inside of your house because that only affects you. If it is unsightly you have to suffer alone.

The body or state has the right to make laws governing the enforcement of child support because the payment or non payment of such support affects the group. If child support is not paid then the one with custody is forced to rely upon the body for support which causes a drain on all members of the body.

On the other hand, the state has no right to make laws governing which religion your child is raised in because the choice of a religion generally does not cause a drain or negative affect on the quality of life of the group.

The point is that there are certain things that the individual may not particularly like to be governed by, but if these things can have a disturbing effect upon the whole then the body or state does have the right to make laws to correct the problem.

At this point an independent soul may say…

“But I have withdrawn from the body or state and have fired all authorities, therefore I am my own law and am not bound by any decrees of the state.”

That sounds good, but I would venture to say that you have not fired the state. If you have truly fired the state then you would truly cease being a part of the body and using its resources.

What resources you may ask?

Here are a few.

I would venture to say that if an individual is partaking of the goodness or badness of a state or body then one has the moral obligation to recognize and abide by the laws of the body that affect the body as a whole and are accepted by the majority.

The point is that individual rights and individual desires are two different things. We have the right to life, liberty and the pursuit of happiness as long as our endeavors do not infringe upon another person’s life liberty and pursuit of happiness. But when we reach the point when we can have a negative effect upon others then the individual rights must yield to the rights of the whole. If, for instance, it makes you happy to have your six dogs wake you up every morning at 5 AM, but this happy event causes great stress to six of your neighbors this puts you in the situation of your gaining a little happiness at the expense of six others. Now why, in this group of seven, should six sacrifice their right to happiness so you can awake to the sound of your wonderful dogs???

I can think of none.

And how do you solve a problem like this? They can only be solved on a permanent basis by rules established by the majority.

I cannot think of any reason why anything but (3) would make any sense.

All right, there is a possible fourth. They could try to solve it on an individual basis. In some cases the scenario would go something like this. Several of the neighbors approach the dog owner and the dog owner refuses to cooperate. He thinks that a person is crazy if he is not up and around at 5 AM. He was raised on a farm and thinks everyone should have been.

The neighbors become angry and seek revenge. One neighbor poisons one of the dogs, the noisiest one. The dog owner cannot prove this, but he is sure that one of the neighbors did this. To get even he buys four more dogs, a rooster and two pigs and the noise becomes twice as great as it was before.

A couple days later one of the neighbors snaps, gets his gun and shoots all the animals when the dog owner is gone. When the owner gets back he is outraged and burns the house down of the guy he thinks is responsible. Now it just so happens that he picked on the one guy who was innocent. Now a war begins to the death.

The question is, why should we have to deal with such insane situations when a few rules governing group behavior can prevent such things???

The point is that individual desires are not individual rights. Any group laws or rules will frustrate the individual desires of a few to the benefit of the many. For instance, just because the guy thinks he has the right to have noisy animals does not a right create. If a rule is created establishing noise guidelines and the only way to ensure enforcement is to get rid of the dogs then the guy may think his rights are violated. The truth is the rights of the six others are upheld. The dog owner’s rights would not be violated, but his desires would be. Two different things.

If one truly wishes to reject the body or state then he should do just that. About the only way to do that in this day and age is to live in some wilderness area removed from society. The trouble with this is that it is a worse state of livingness than living within the body. But to live in the body and enjoy a higher state of life because of the body, yet reject the body because it has nothing to offer, is a contradiction in terms.

I personally do not like or agree with all the State does and am a big believer in minimal government, but because I am a member of the body I recognize certain obligations to the whole. If some law or rule of the state irritates me to a sufficient degree I will then seek to change that law or remove myself from the group. If I were to truly reject this state completely I would leave it because to stay would make me into a victim.

If one sees a law unjust then he can break it, but be willing to suffer the consequences.

DK says this: “But the new law must, and will, be enunciated. This law can be summed up in the words: Let a man so live that his life is harmless. Then no evil to the group can grow out of his thoughts, his actions or his words. This is not negative harmlessness, but of a difficult and positive activity. If the above practical paraphrase of the words of Christ were universally promulgated and practically applied, we should have order growing out of chaos, group love superseding personal selfishness, religious unity taking the place of fanatical intolerance, and regulated appetites instead of license.” Esoteric Psychology I, Page 301