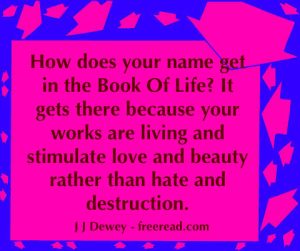 The Name of Christ & Questions

I received a letter basically asking what we should call Jesus if we should meet him again.

Some think he is the same as the Biblical Jehovah and thus should be addressed as YHWH, Yahweh or as close as one can get to the correct pronunciation.

Others think that it is sacrilege to use the English name Jesus but should call him by the Greek IESUOS, approximately pronounced Yaysoos. Still others tell us that IESUOS is derived from the greek Zeus and that Christ is offended that the masses are using it. Some say instead we should use the Hebrew name because it is most ancient. Suggested are Yahwehshua, Yahoshua or simply Yeshua.

Question: Do you think the Christ would be offended if you met him and you called him by a wrong version of his name? Does it matter what you call him? Why or why not?

If you were Jesus would you use some ancient name when you came again or would you choose a new name?

What do you suppose this new name of Christ is and how is it written upon the disciple?

We also read: “I know thy works: behold, I have set before thee an open door, and no man can shut it: for thou hast a little strength, and hast kept my word, and hast not denied my name.” Rev 3:8

Question: Do you think the Christ would be offended if you met him and you called him by a wrong version of his name? Does it matter what you call him? Why or why not?

First I will say that I am not offended if someone innocently calls me by a wrong name. Since Christ is greater than me he would probably show even more tolerance. If a tolerant person desires to be called by a certain name then all he has to do is make it known that this is the name he desires to be called by. There are no clearly defined comments in scripture on this matter so no one should be condemned for using the name that seems best.

Question: If you were Jesus would you use some ancient name when you came again or would you choose a new name?

Answer: I would choose a new name that blended in with the society I was working with.

Question: What do you suppose this new name of Christ in Rev 3:12 is and how is it written upon the disciple?

Answer: In past ages God was seen as outside of self, in the burning bush, on mount Sinai, in the sky etc. But in this age a new name for God is “the God within” or Christ within.”

We also read: “I know thy works: behold, I have set before thee an open door, and no man can shut it: for thou hast a little strength, and hast kept my word, and hast not denied my name.” Rev 3:8

Question: How does one deny the name of Jesus Christ?

Question; could you elaborate on the last thought of the following quote saying, “the well-known failure of the Buddha to attain his goal”?

“All have failed and will again along some line. E’en the Masters fail at times to pass through one or other of the highest initiations at their first attempt and – from the hierarchical angle – that connotes failure. But the failure is scarce recognized; the effort is made to register what caused the failure and the inability to stand before the One Initiator, for all effects emanate from some ascertainable cause. So should it be on all levels of advancement, even such a relatively unimportant effort (from the point of view of hierarchical work) as your attempt to gain the right of entry into my Ashram or what is called “ashramic penetration,” and then on and up through many graded failures, until you meet the well-known failure of the Buddha to attain his goal.” Discipleship in the New Age, Vol 2, Page 732

According to Djwhal Khul, the Buddha still has an attachment to humanity and this has caused him not to move ahead on the path. He chose the path of earth service instead of the path to Sirius where he was supposed to have gone. Buddha did not quite reach his goal of non attachment.

He also failed to make sure that a clear doctrine of the Middle Way was passed down by his disciples.

Of course, using this standard we could even say that Christ failed to insure the full understanding of love was passed down and taught during the Piscean age.

Each avatar can only do so much to make sure his message is understood.

Comment: It’s difficult to see the line between attachment and sacrifice in this situation. It seems the Christ would benefit by Buddha’s choice of earth service in addition to all of humanity benefiting.

JJ: Yes, we all benefit from Buddha’s choice, but in the sense of the universal good beyond the scope of this earth he could have accomplished more had he made his best choice which was the path to Sirius.

Question: How does one determine it wasn’t a situation of non attachment to moving on?

JJ: All setbacks in our progressions are because of attachment of some kind and attachment reaches to levels that disciples on earth cannot even imagine.

Each one of the nine initiations is a freedom from attachment of some kind. The Buddha has reached at least the sixth initiation. He chose a temporary Path of Earth Service because of a good attachment (from the viewpoint of humanity) which was an attachment to his love of humanity.

Questions: Is time a factor at this level of moving ahead? How is Sirius affected by his choice? How does this affect Buddha’s future?

JJ: He has delayed his own progression, but because his intent was pure he may have a chance to make up for lost time. There would be some effect on Sirius, but I’m sure they will compensate.

Question: Once he’s liberated from his attachments here will he be free to move on to Sirius?

JJ: Djwhal Khul indicates that Sirius is no longer in the plan for him. Here are a couple quotes:

From Rays and Initiations

“The Buddha was originally to have chosen the fourth Path (Sirius) but other plans confront Him now and will probably claim His choice.” Pg 415

“This word He has lately given in the case of the Buddha, Who has expiated His most understandable mistake and will now move forward-in His own good time-on to the Path which will lead Him to His rightful field of expression.” Pg 397

DK does not say what the new path is, but chances are it will be the path of the Planetary Logos since Buddha is now working closely with Shamballa.

Question: How closely is sacrifice related to attachment?

JJ: It takes discernment to differentiate between true non attachment and sacrifice. Many think they are detached when they are sacrificing a desire which still lingers with them. With true detachment no sacrifice is necessary. Buddha’s love for humanity created an attachment that made it difficult for him to move on. This was good for us, but created a delay for him and a vacuum on Sirius. Such a delay is not of large moment, however, when considering the wholeness of the path of the soul traveled by one of pure intent.

Question: Do our souls evolve from the animal kingdom into what we know as humanity or into something else? I’ve never met an enlightened cow but some Buddhist sects I’ve heard of forbid the killing of insects and worms because you could be killing your grandmother’s grandmother. is there any truth to that in Reality?

JJ: As far as our evolution goes we always move forward and not backward. Some Buddhists and Hindus believe that if you live a bad life you can be reborn as a snake or some other animal, but in this round of evolution you will always be reborn as a human until you become more than human in the kingdom of God.

If a person is very carnal and identifies powerfully with the material world he can, from the astral world, identify in consciousness with an animal. Because the will of a rat is small he can share the consciousness in its body if he desires. But the spirit of the animal still lives in the body. Perhaps this is where this false teaching originated. This misconception has caused some in the East to be too extreme in dealing with the lower kingdoms.

This process of combining lesser parts to create a greater is covered in detail in the book The Molecular Relationship.

You as a human, in turn, are composed of millions of lesser lives, including cells, bacteria, organs etc.

Question: How about killing a fly simply because it’s buzzing in my face and bugging me, would that in Truth be considered wrong action in any way?

JJ: Lesser lives like insects are not such a mistake to kill as a dog, for instance. We should not kill anything that is doing us no harm, (except for food) but I would have no reservations about swatting a fly that is buzzing around driving me crazy. On the other hand, if an insect is causing me no annoyance I will usually leave him alone or put him outside.