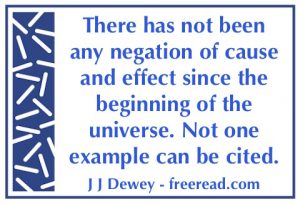 The Logic of Karma

Question: If you kill someone and incur a debt that is paid off by being reborn and being murdered yourself – what happens to the guy who murders you? Since you had it coming was your murderer justified.

The answer is a definite “no.” You are judged by the perimeters of the life in which you are living. Even if Hitler was born again and we knew who he was we would have no right to do him any harm if he was threatening no one in the current life. It’s not up to us to be judge and jury for the past life debts of anyone. Things will happen naturally to cause us to pay off our debts as illustrated in the last chapter I posted.

Jesus said: “Woe unto the world because of offences! for it must needs be that offences come; but woe to that man by whom the offence cometh!” Matt 18:7

Because of karma offenses (murder, rape, robbery etc.) will come and those who suffer offenses may be in the process of paying off a debt, but “woe to that man by whom the offence cometh!”

In other words, people suffer the effects of karma, but woe be unto you if you act as the judge and jury in carrying it out.

The woman in a recent story who poisoned her past husband did incur karma and will have to make it right in a future life. Two possibilities is that she will (1) have her life taken from her or (2) save the life (in a future incarnation) of the man she killed – or possibly some other person.

In the past I have stressed that good is that which moves us ahead in evolution and evil is that which holds us back. There is another way of looking at it as written in the Aquarian Gospel.

It points out that evil is not necessarily the opposite of good, but merely good, or the perfect, which is out of tune.

In other words good is playing the scale on a piano which is in tune. The sound is pleasant. But if the C note is out of tune then the sound is not pleasing. Now the C note does not have an opposite evil note, but this one note does have millions of variations which are close but out of tune, or evil.

When we are out of tune with the soul then we sound unpleasant notes and our actions are out of harmony, or what some would call evil.

Even those who are out of tune are still trying to play good music, but the effort is fruitless until they attune themselves to the highest available within themselves.

Comment: Notice here that Cain expects to be slain more than once. Also study the Lord’s response: “And the Lord said unto him, therefore whosoever slayeth Cain, vengeance shall be taken on him SEVENFOLD. And the Lord set a mark upon Cain, lest any finding him should kill him.” Gen 4:15 — end quote —

Moses seems to be teaching above that the punishment for murder would be SEVENFOLD. That is, if one murdered Cain (and one would presume the principle would apply to any case of murder) that one would necessarily have to suffer being murdered seven times (implying that one would necessarily have to be reincarnated to experience this, as one can only be murdered once in one lifetime). You also mention that Cain expected to have his blood shed more than once to atone for his crime.

JJ comment: Notice that it says that vengeance shall be taken upon those who kill Cain (and probably his descendants) sevenfold.

Because of Cain’s reputation he feared that he and his family would be killed and thus he would have no bloodline which would have over seven times the effect of the murder of a normal single life.. On the other hand, God wanted his bloodline to survive so he made a special case with Cain and his family. He put a mark on them so everyone would know that if they killed Cain in an attempt to cut off his bloodline they would receive seven times the punishment of killing anyone else. This was insurance that Cain’s lineage would be preserved.

The New Testament gives the correct law of karma which states:

“Be not deceived; God is not mocked: for whatsoever a man soweth, that shall he also reap” Gal 6:7

Keep in mind also that there are numerous ways to pay off karma. The payment is always equivalent, but not always in similar kind.

If you owe a neighbor a cup of sugar he or she may be happy with a glass of wine, the loan of a newspaper or just good conversation for the payment.

Note that in the story the man killed his wife and three children, but he paid off the entire debt by saving the lives of the three children (at great risk) and giving his life once as payment for the death of his wife.

His wife did accumulate karma for killing him, even though the man forgave her as he was dying. She could pay this off by saving a life in the future if it turns out she follows her soul. We only have to pay off karma the hard way when we refuse to listen to the inner voice.

If the man had not listened to the soul and killed his children again he would have had a much tougher time paying off his debt.