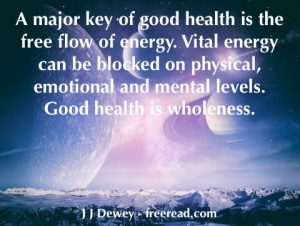 The Flow of the Soul

The first Law of Healing as given by Djwhal Khul Through Alice A. Bailey reads:

“All disease is the result of inhibited soul life, and that is true of all forms in all kingdoms. The art of the healer consists in releasing the soul, so that its life can flow through the aggregate of organisms which constitute any particular form.”

Thus, either conscious or unconscious acts that restrict the flow of soul energy cause disease.

We have just discussed one of the major causes of soul obstruction and that is suppression and denial of negativity.

From my research with handwriting analysis about half the population have this problem to some degree. About 20% have suppression to a dangerous degree.

I knew when I wrote the following statement that someone would call me on it because on the surface it does not seem to be true according to standards that most seekers go by.

“He takes no responsibility for your negative feeling or your hurt. In this case the negative energy remains.”

I had some questions on this so will give a fuller explanation.

The damaging suppression I was talking about does not come from standard casual relationships such as I have with readers who are offended by something I say.

The hurt or anger generated in relationships are our own responsibility in normal circumstances. The only ones that can put us in a situation where suppression is dangerous are those with whom we are close enough to establish a bond of trust. These include but not limited to:

(2) A close friend or trusted partner

(3) Someone whom you recognize as a trusted authority because of some contact through group life.

As a general rule people outside of this circle do not have power to cause a grievance in the life of an aspiring disciple. The closer you are to another human being the easier it is to negatively affect their emotions. The reason for this is that close relationships create a greater personality life that links the group on an emotional level. (The Molecular Relationship creates a greater life on the soul level.) When two or more share emotional energies as one life then there is not only opportunity for great fulfillment but also for hurt, suppression and grievance.

For instance, most of those who were offended at Jesus did not know him as a person from the guy in the street, nor did they have any bond of trust with him. They were not offended at Jesus the person, but at the power of the words and ideas that came from him, How you react or do not react to people that you are not in emotional relationship results in much less power to cause the harboring of negative energy.

Take myself, for instance. At present the only person on the earth that has power to create a disturbance within me that could tempt me to suppress would be my wife. This situation does happen now and again and when it does I find that my emotional body is affected by some silly little things. I am tempted to not communicate the potential grievance because it seems so petty, but, because I understand the principle, I force myself to do so and when I do the grievance immediately disappears.

I also seem to be the only person who can cause a grievance to surface within my wife. I have noticed throughout my life that I have had the power to create emotional hurt with every female that I have had a romantic relationship with and this hurt usually occurs at a time that I had no idea I was saying or doing anything offensive. The problem is that the emotional body is not that bright and does not synthetically interpret data so misunderstandings are easy to come by.

There have been times in relationships that I have unintentionally caused hurt and my partner attempted to pretend that everything was fine. When this has happened I have been able to sense that all was not well and then attempted to communicate and bring the hurt to the surface. When the hurt then comes to the surface I have found that the only way to completely neutralize the negative energy is to take part of the responsibility for its creation.

But wait, you say. It is the other person suffering the hurt so he or she is the responsible one. You did not intend to hurt and should not take responsibility.

This is indeed true in relationships that do not have a strong emotional bond or trust, but where this bond exists the two become as “one flesh” on the emotional level. Because the two are one from the viewpoint of the astral body the intelligence of the astral body insists that both parties are equally responsible for any hurt and it matters not which of the two individuals the hurt resides in.

Now when the hurt occurs in either me or my wife I find that normal reasoning does not work. If I tell her that she “shouldn’t feel that way.” she is likely to throw something at me. It may be true that when viewed by the logic of the mind that she and I are both silly to feel the way we do at times, but mind is powerless to talk the emotional body out of hurt by reasoning alone. Even if the offense is not intended, and ridiculous by the standards of the whole world, the one who created the hurt must communicate a sharing of the responsibility to the emotions of the other person. Because the two are seen as a greater life the astral nature insists on a shared responsibility on all feelings generated, especially hurt feelings.

The bottom line in the real world is this. When I hurt my wife’s feelings and bring then to the surface I must then communicate to her feelings that I am somehow sorry for my part in the damage, that I am responsible for the problem as well as she is. I must show her an understanding and empathy on an emotional level. Now when I do this and the communication is accepted the negativity is immediately lifted and dissipated. As I said, I have proven this works, not only with my wife, but in all past romantic relationships I have had.

This works two ways. There are times that I have received hurt and I could see that the hurt was not logical and I mentally deduced that I should not feel the way I felt. But the reality was that I did feel that way and the moment my partner communicated to my emotional body that she shared the responsibility the negativity was immediately lifted.

Let me repeat that this problem can occur in any close friendship, marriage or with a trusted authority.

Keep in mind here by far the most damaging negative emotions surface in close emotional relationships as we have been discussing. Feeling irritable at the mailman for being late or the politician for being ignorant rarely causes any significant damage. Secondly, suppression and self-control are two different things. Many who have good self-control do not suppress and many who suppress have little self-control, but do it out of fear.

I get angry and irritable periodically and find that a certain amount of passionate release does not offend my soul. Then, I also find that when I reach a certain point I receive a soul communication that says something like: “Ok, you’re going too far now. Calm down.”

When this soul communication comes I must at this point bring self-control into play and tell my emotional body that it has expressed enough and it is time to quiet down. I rarely get angry at others, but find that most of my anger is directed at myself for careless mistakes I make.

But in our relationships with others when the hurt comes or the temptation to anger comes release can be accomplished not by lashing out but by communicating feelings with non destructive language. Instead of attempting to strangle the guy, tell him that you just feel like strangling him. This method works just as good with no harmful side effects.

I hope I have set the example for you, my friends, here in this discussion group since the beginning. There have been numerous times that fairly inflammatory remarks have been made in my direction. You will note that there has not been a time that I have found it necessary to suppress or hold back on an honest response and communication of true feeling. But you will also note that I have always attempted to respond in a civil manner without strong emotionalism or name-calling. I have resisted any show of anger or attack yet communicated clearly what I thought and felt. Consequently, through this whole ordeal of the ups and downs of the group I have stayed emotionally healthy and in good physical health despite my lack of sleep.

Hope this sheds some light. If any further clarification is needed please respond.