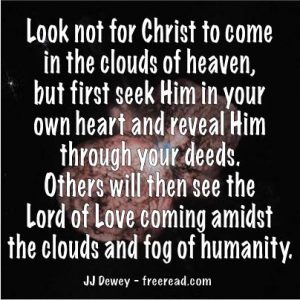 The Most High called for his Beloved Son and said, “Behold the earth and the people therein. What are the believers teaching of you in this age?”

The Son looked upon the Father and said, “They teach as they have taught for 2000 years. There are bits and pieces of truth colored with distortions, traditions and the doctrines of men.”

“Is nothing different then?”

“There is one thing that is different,” said the Son. “At this time emphasis is placed on the end of the world as never before. Many are expecting great destruction followed by my appearance in glory.”

“And how do they expect your appearance in glory to transpire?”

“Many are expecting me to appear with great brightness in the sky with many angels and proceed to destroy the wicked and then reign with the believers.”

“Is this what you desire, my Son?”

“I desire to assist the true seekers, but My words of my Coming have been distorted and misinterpreted.”

“Yet many believe in this traditional magical appearance?”

The Father reflected for a moment and added, “And if you should appear and walk among them will they know and understand you?”

The son looked downward as if in sorrow and replied, “No. I do not think so.”

“Then we must give them what they desire that they may learn. Prepare yourself and the angels for a Second Coming as the believers anticipate.”

The Son thus prepared all things and as the day approached the Father asked, “Are all things in order?”

“As much as possible,” said the Son. “The biggest problem is that many believers condemn other religions with doctrinal differences. Instead of coming to one sect I will appear to as many as possible.”

The next day seemed like a normal day for planet earth. There were earthquakes in divers places and wars and rumors of wars through the earth. But then something extraordinary happened. A great light appeared in the sky that was visible throughout the four corners of the earth. No one could explain why people on both sides of the globe could all see it but it was visible to every man, woman and child at one time.

The light grew brighter until it was more intense than the sun. The believers who looked upward saw the Son and his angels and rejoiced that the great day had finally arrived. The non believer who looked up caught on fire and burned as stubble in the field. There were a handful of non believers, however, who slept through the whole occurrence and never saw the light to be consumed by it. These survived with the believers.

The next three days were a time of bliss for the believers. They gathered together in their groups, held hands, sang songs and waited in anticipation to see what would happen next.

On the third day each inhabitant of the earth heard a voice in their head announcing that Jesus would appear on television at a certain time. At the designated moment all television sets were on and the people beheld a great news conference being held in New York City. The people beheld a Jesus who looked just like the pictures in Sunday school. He had a white robe, a beard and wore sandals. He thus stood before dozens of anxious reporters.

“I will take questions now,” he said.

A reporter in the front row stood up and said, “I hear that some Mormons and Jehovah Witnesses were spared. Is this true?”

“But they do not believe in the real Jesus and were supposed to be destroyed with the wicked?”

“I am the real Jesus,” he said, “and many of them did believe in me and thus were saved.”

“Next question,” said Jesus as he pointed to another reporter.

“I am of the LDS, or Mormon faith,” he said raising to his feet. “I thought things were going to be the other way around from the belief of this first fellow. Were you not supposed to come to the faithful in our church and not to the other wayward Christians who do not understand you?”

“As I said, I come to all who believe in me regardless of their church membership.”

A third reporter stood up and shouted, “How about the Catholics Surely you have to realize that church is the great whore of the earth and must be destroyed.”

“Many Catholics believe on me and are saved,” he stated.

Finally a Catholic reporter stood up and said, “Surely those of the mindset of this last reporter must be punished and destroyed for rebelling against the Mother Church and the Pope?”

“I have already destroyed most of the non believers. This is enough.”

The next reporter stood and stated, “Are you saying that you spared some non believers? Shouldn’t we seek them out and destroy them so they cannot spread their poison again?”

“This was my decision to leave them and it stands.”

A murmur then spread through the crowd.

Another reporter stood and said, “I am of the Islamic faith. My sacred book, the Koran, teaches that you are a Messenger of God and I have always believed in you. The problem is that these Christian believers do not accept Mohammed. Why did you not destroy them so we can have a true kingdom of peace?”

“Let me say this again. I have come to all who believe in me.”

Another reporter bolted to his feet shouting, “Are you telling me that you spared some Muslims? What kind of savior are you anyway?”

“The savior of all who accept me,” he said.

Another stood and shouted, “I know the real Jesus and the real Jesus knows me. You cannot be the real Jesus for you have allowed the wicked to mingle with those who have the true salvation. It is written that the devil can appear as an angel of light. Now let me ask my fellow believers this question. When we first looked up in the sky and saw this man, what did we see?”

One in the audience then spoke up and shouted to the top of his lungs, “We saw an angel of light!”

Hundreds of people shouted out the word…

“That’s right said the man. We know the real Jesus and obviously this is not him. Instead this is the prophesied antichrist who was to come first.”

Hundreds of others joined in with him until the building vibrated to the chant.

“And what is that?” asked another?”

The man then shouted, “Satan had our Lord crucified and now it is time to crucify Satan. We must crucify this imposter here and now. When he is dead then the real Lord will come.”

This time the crowd started shouting another word…

“Enough,” shouted the reporter and instructed several men to grab Jesus and hold him tight. “There is construction taking place on the next floor. Several of you go there and bring back some beams, large nails and hammers.”

This they did and then swiftly constructed a cross and laid Jesus upon it. He did not resist. Several men nailed his hands and feet to the cross and raised it up.

The reporter acting as spokesman for the group then said, “See, this is only a man of flesh and blood. He will soon die and then the real Jesus will come.”

This scene was not only visible to the people in the building but to all the people of the world. All but a few of the believers thought that the antichrist had been discovered and was being punished. The odd thing though was that the few non believers who were left who watched their televisions watched in horror as they saw an apparently innocent man being crucified by a frenzied crowd. Overall the zeal of those who approved of the crucifixion was so overpowering that the voice of protest could not be heard.”

Then, as the whole world was glued to their television sets, a man from the crowd came forward, looked at Jesus and said, “If you are the Son of God, come down from the cross.”

Jesus looked at him and said, “This time I will.”

Immediately the cross disappeared into thin air and Jesus stood again at the microphone before an audience that was as quiet as an ancient tomb.

He spoke, “It is true that you believe in a messiah and a savior whom you call the son of God. But this son in whom you believe is an image of your own creation which would crucify the real Christ. I must go now. You will not see me again until you listen to the true voice of God that speaks within.”

He then disappeared out of their midst.

And all the believers of the earth were ashamed of themselves and many vowed to recognized the Christ should he come to them one more time.

Jesus returned to the father and the Most High spoke, “Tell me, my Son, are the believers ready to hear all the great and wonderful teachings that will guide the people of earth to a great and lasting peace and prosperity?”

“No my Lord. They are not even ready to embrace a fellow believer.” Then Jesus told him the whole story.

“Sad indeed,” said the Father, shaking his head. “Sad indeed. I told you to trust me and now I will reward your faith. I am returning the world back to the way it was before you made your appearance with one subtle difference.”

“Deep within the recesses of the minds of the people of earth will be a distant memory of what happened and how each handled the circumstance. This memory will gnaw at their hearts until they learn to accept the real son of God.”

“Great is your wisdom my Lord,” said Jesus. “If time is back to where it was then no Second Coming has happened. Tell me. Should I still plan on the event?”

“Yes, my Son. Plan on the event, but this time do it in your own way and in your own time.”

“Do I still have to destroy all the unbelievers? After all, those who survived saw the truth of the situation better than the believers?”

“The Father smiled and said, “My son, whom I know so well, will not come to destroy, but to save humankind. Use your wisdom that I have planted within you, make your appearance as suits you well and teach all that can be accepted. Teach all faiths. Teach those who do not believe and those who do believe. Indeed, teach all who accept light and truth, and in time light, knowledge and love will fill the earth.”

The Son looked upon the Father and replied, “Thank you for the lesson of the preparatory Second Coming. Now I know what I must do and how I must proceed. The prophesies will be fulfilled, but much differently than the world expects.”