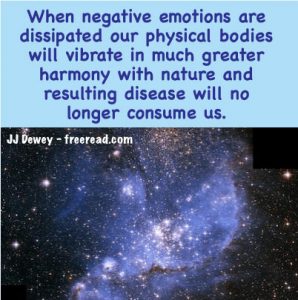 A reader wants to know why we do not allow posts that have grievances toward other members. After all, I did teach that we should find outlets for negative emotions? He points out that restricting them will not make them go away.

He is right. Restricting grievances does not make them go away. As you know I have taught several times about the wisdom of releasing the emotions and not suppressing them. Suppression causes all kind of problems, but so does release if it not done harmlessly.

Allows me to recap some of my previous teachings on the matter.

The key to emotional fulfillment is to avoid suppression. Suppression is a form of avoiding communication. This is especially dangerous when the negative emotions are suppressed for this can lead to disease. Just like steam pressure in a tea kettle can cause it to blow its lid, if it has no release valve, so can suppressed emotion cause a person to explode unpredictably. An unpredictable moody person is usually one who suppressed emotion.

Whether a person suppresses or not, he has a need to express himself emotionally whether it be romantic love, hate, anger, happiness or any other feeling. The emotions should be controlled and rightly directed, but not suppressed. No one likes to live with a walking time bomb and this is what one becomes if he does not intelligently release his feelings, now and then, to let off the dangerous pressure.

One must find a release for emotional feeling as it arises or it can build up a negative energy pressure to a dangerous level. For instance, if one feels anger he should not pretend that it is not there. This is dishonest communication and negative whereas control of anger and honestly communicating it harmlessly is positive.

What then should we do with anger, or other negative feelings, when we have them if we are not to suppress ? Should we attack the person we feel angry at? No. This would be uncontrolled emotion. Instead we must direct the expression of our feeling through the control of the mind.

When we are angry our emotional self sends a strong instinct, not to think, but to immediately carry out a destructive action. However, the mind must override emotional authority and declare: “I will not release my authority to decide a course of action. I will stay in command.” After maintaining the reigns of control the mind can then say: “My emotional self feels all this anger toward Mary that needs released. What is the most harmless way to let it off?” The mind then decides to communicate instead of attack. John says to Mary: “Mary, what you just said makes me feel very angry. I feel like slapping you. I, but, of course, I will not do it, but you really upset me and hurt my feelings.”

Most people have feelings within them, positive and negative, locked tightly within and fear letting them out in the open. They are afraid of becoming vulnerable, believing that they may be hurt as they have been in the past. Nevertheless, each person still has an inward longing to share and release these feelings and they wish with all their heart they could trust someone enough to intimately communicate with them.

If you are reading these lines and feel a need to share suppressed emotions, but cannot because you feel that you cannot trust others to not hurt you then the solution is to let the mind assume control and tell yourself: “If I suffer pain because I trust another with my feelings it will not be as bad as the emptiness I now feel because I hide them. Therefore, I will share my innermost feelings, even at the risk of pain. Some pain mixed with pleasure is much better than non-existence.”

Life is always less painful to one who communicates than to one who does not. In one way of looking at it we could say: “All emotional pain is an indication of a failure to communicate.”

If one finds himself responsible for helping another person release pent up feelings he will become endeared in that person’s psyche for a lifetime. The overflowing stream of peace and joy that follows such a release is sometimes overwhelming.

When one enters a situation where he can communicate and control his negative feelings, then he is faced with the need of using his positive feelings to create a fullness of joy. This is the circumstance we should all find ourselves in if we follow our inner urges to communicate.

He or she then works toward a fullness in communicating love-desire energies, affection, sexual and romantic feelings, appreciation, generosity, givingness, and freedom.End Quote

Now the problem we have periodically with the group is multifold.

(1) Some desire to work feelings out through involving the whole group with emotional problems that should be able to be worked out with several individuals.

Here is what I mean concerning this area. Bob says something that offends Rod, but is not aware that he hurt his feelings. This happens several times until Rod gets so steamed up inside that something must give.

What is the right and wrong thing to do here?

The wrong thing: Rod makes a post to the group calling Bob an out-of-control emotional hypocrite that wouldn’t know the soul from a bad case of gas.

What then happens? Bob not only responds attacking back but many in the group are also outraged and respond.

What is the result? For the next two weeks nothing is done except an exchange of hurt feelings and when the dust has settled nothing is resolved and several leave or threaten to leave the group.

What then is the right thing to do?

Instead of going with his emotional instinct, Rod, first of all, wants to make sure he understands Bob correctly so he sends him a personal communication and says something like: “When you made your post it sounded like you were implying I was stupid. If so, this would really hurt my feelings so I thought I would check to see if this is what you really meant.”

Most likely Bob with write back saying that is not what he meant and that would be the end of it. Most hurt feelings are caused by misunderstandings and cleared up when there is proper communication.

But what should Rod do if he finds out Bob really does think he is stupid?

What he should not do is attack back.

What he also should not do is suppress or deny his hurt feelings.

What he again should not do is make an attack.

What he should do to release his feelings is to tell Bob how he feels without using attack words. He might say something like this:

“I’m sorry you feel this way about me or any other fellow workers Bob. I must let you know that your statements and rough language does hurt my feelings and I hope you’ll take them into consideration in the future.

Rod thus communicates his hurt feelings to Bob. This releases the pressure of the pent up emotions and places the responsibility of correction on Bob. Now Rod has made his communication there is nothing more he needs to do. It is possible that Bob may take him the wrong way and attack back. If this happens Rod will be tempted to add to the vicious circle, but he must resist and not attack back. He should merely give the same answer again and again until Bob’s attack mode dissipates.

His answer should go something like: “My feelings were hurt and I needed to share this with you. If it bothers you that my feelings are somewhat fragile at times I apologize, but my feelings are my feelings and there is not much I can do about the except express them as harmlessly as possible. This is what I did with you and your understanding in this matter is appreciated.”

Overall this group is quite stable and members treat each other with consideration, but there are times when members seem to want to vent on the list. There are always exceptions, but normally this is not the place to do it, and thus the moderation process comes into play. Even so this does not stop the emotionally offended ones from making the needed communications privately, not involving the group.