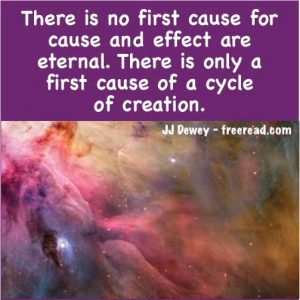 I am amazed at this strange doctrine concerning Karma not being real that has surfaced in the new age community over the past few years and am curious where it has come from. All the sages past have taught the principle of cause and effect. It is plainly taught in all the scriptures of the world and in modern inspired books by Blavatsky, Alice A Bailey and even the Course in Miracles. Is there some new recent channeled work that I am unaware of that brings forth this great illusion? If anyone could cite some reference here it may help me understand where this teaching is coming from and why it is so easily believed. Or is it possible that many are just creating their own version of belief in Karma associated with a desire to escape effect?

I think however we are beginning to make sense out of a recent post. Misapplied teachings of karma have indeed been used to enslave the minds of many.

There is great illusion being derived here from the comparison of karma to the statement of Newton’s Law. The potential correspondence is accurate, but the correspondence must be seen as it is.

Where is the illusion then?

The Law states that for every action there is an equal and opposite reaction. Note that it DOES NOT say that the opposite reaction is a different type of force than that created by the action but an “equal” one. The word “opposite” refers to the direction of the force, not the force itself.

I was asked what is the opposite of Love. This question has nothing to do with the true point we are discussing. Why? Because when the initiating cause is love in the direction of another human being we then have the effect (karma) of love coming back to us from an opposite direction. Sending out force does not cause something other than force to return and sending out love does not return hate. But the opposite involved is not the opposite of love or force, but the opposition involved is in direction. Love begets love, force begets force, hate begets hate.

Question: What is the opposite of Karma?

Answer: Oblivion, lifelessness, voidness, nothingness, deadness, no creation, no love – the opposite of Becoming. If this appeals to you then go for it but for the life of me I cannot see the attractiveness of it in this reality.

Now some say that cause and effect are happening at the same time in a higher reality where there is no time. This may be true but still it does not negate karma. I submit that the Eternal Now is not timelessness as many teach, but a consciousness that allows time selection. If their were true timelessness as some believe then nothingness would be the result and the higher worlds are far from being nothing.

Now some associate karma with guilt, but guilt is created by illusion, a trick of the mind caused by an outside entity or voice that takes the place of the true god within. Outside voices can be very deceptive, but again, even with this we have a cause and effect. An outside voice causes you to believe you are to trust in the voice of God out there and that you need to hang your head in shame when commands are not followed.

Let us take a Mormon and a non religious person drinking coffee together. The good Mormon will feel very guilty about it, but the other guy will feel no guilt even though they are doing the same thing. The true basic effect on them physically is the same.

However, one feels guilty because he erroneously believes he is displeasing God and the other feels no guilt. Because guilt is created by illusionary cause it can instantly disappear as soon as the illusion is removed.

In this way Christ removed our sins for he dispelled much illusion that removed us from effects of karma that we never had in the first place.

Imagine that the Mormon authorities told the church that they could now drink coffee. Instantly, all guilt surrounding this act of coffee drinking would be erased, but the real effect from the hot liquid and caffeine would remain the same as before in the real world.

On the other hand, the effect of missing out on a lot of enjoyable coffee drinking is a residual effect through decision to accept illusionary cause.

Now some of you are saying that karma exists merely because we believe in it. The only way karma is altered by belief is when belief initiates a new cause and produces a new effect. It does not negate a past effect, but joins in with it.

Let us say a person throws a stone in a stagnate pool and it creates a rippling of waves. Now I have a second stone that I will label as a cause created by belief and I throw it in where the ripples are. Does this nullify the previous effects?

No. The ripples are still there from the first stone.

Does the new stone create an overall new effect?

Is there any way that you can use belief only to cause all the ripples to instantly disappear?

If you desire a still pool what are you to do?

Answer: Wait for the forces to play themselves out. There is no other way. As the forces are playing themselves out you might want to make the best of it and throw a leaf in the midst and watch it dance upon the forces until stillness arrives.

NOTE: It is interesting that I wrote this just before I read Geoffrey’s words as follows:

This is an excellent use of the Law of Correspondences. The time will indeed come when all karma will be played out and we will enter into a peaceful rest to contemplate the experience. But then we will plunge again into the rippling world of cause and effect and play the game one more time, but a little wiser than before.

If karma, cause and effect, is caused by belief only then why does it exist on the surface of Mars where there is no intelligent life or belief?

Why does karma exist in the animal kingdom for animals have no beliefs? Some say that karma exists because we see ourselves as separate. Yet the animals see themselves as interconnected yet still experience the effects of karma.

DK basically said that among primitive man for millions of years the animals were the ones that dominated the human kingdom. Early man lived in constant fear of ferocious animals and there was a great struggle on the part of the human kingdom just to stay alive in their midst. Many there were who had friends and family killed and eaten by the beasts.

Now DK says that this situation which lasted for eons created a karma within the animal kingdom that is being played out today. Now the situation is reversed and humans are a threat to the animals rather than animals being a threat to humans. He says this karma is the true reason that we presently kill animals for food. When this karma has played out then there will be a balance achieved between the human and animal kingdoms and both shall live together with greater harmony.

DK also says there is karma in the very elements of the earth itself, an effect from the previous solar system. Our personal belief would have nothing to do with this residual effect from billions of years hence.

A reader makes a statement that could explain the differing views here:

“Karma is the perceived effect. The perceived cause is an action with which one associates themselves. In other words, you have carried the accumulated effects of a past experience into the present.”

JJ: If we define karma as that which is perceived then a change in perception can give the illusion of negating karma.

True karma is actual cause and effect, not perceived cause and effect. We daily experience the effects of many causes of which we are consciously unaware of and which have nothing to do with our individual belief system.

A while back I perceived myself typing the word “the,” but instead typed “tghe.” My perception did not create the reality, but my lack of focus and cause on the physical plane did. I believed at first I typed the word correctly, but belief did not alter reality.

In fact, the alteration of reality and the creation of misperception of cause and effect is a technique used in brainwashing. In the book 1984 we read of many alterations by Big Brother, but instead of creating a new pleasant reality the result was instead hell on earth.

Some say there is no real karma here because this world is just a larger dream state and when we awaken from the dream we will discover the karma never was.

First let me state that this is a very long dream. Creation on the physical plane has been ongoing for billions of years and since we have been and will be involved for such extensive periods then perhaps it is in our interests to make this a “happy dream” as the Course in Miracles calls it.

It is in the nature of all conscious beings to dream on a regular basis. One who is deprived of the dream state becomes insane. Dreaming in one form or another is something we will do on and off as long as there is existence,.

Even a dream has a cause and then within the dream itself there are causes and effects. When I have a good dream with good causes and effects (karma) I often reflect upon it during the next day or so and feel that it adds to my quality of life. Thus even if it turns out that this life is like a dream we will still take the experience with us to a greater reality and this life will be a cause to ongoing effects in higher realms.

DK describes the coming liberation from physical life as follows:

“Respond, O Rising One, to the call which comes within the sphere of obligation; recognize the call emerging from the Ashram or from the Council Chamber where waits the Lord of Life Himself. The Sound goes forth. Both soul and form together must renounce the Principle of life and thus Permit the Monad to stand free. The soul responds. The form then shatters the connection. Life is now liberated, owning the quality of conscious knowledge and the fruit of all experience. These are the gifts of soul and form combined.” Esoteric Healing, Pages 535-536

JJ: Note that in this liberation form reality is not forgotten for he says we will then own “the quality of conscious knowledge and the fruit of all experience. These are the gifts of soul and form combined.”

Now those of us here in this group are far from having the connection shattered with form so it is best to plow with the horses we do have rather than dreaming of riding the tractor we do not have. If we merely dream of riding the tractor we do not have we will cease being a cause in this reality, but if we plow with the horses we have cause will be generated and the effect will be a plowed field. Maybe it will not be plowed as quickly as we can dream of doing it on a tractor, but at least it will be plowed in real life and preparation is made to eat the real fruit of the vine.