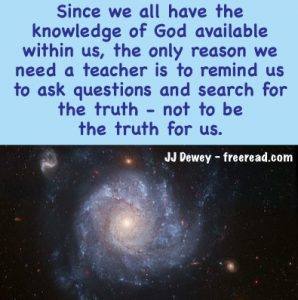 The Father and the Son

I was asked to expand on the concepts of God, the Father, the Christ and the Son.

Each aspect of God has a prime representative on each living planet. The Ancient of Days Occupies that position on this planet and the one who was in Jesus occupies the position of Christ, a position he will hold for another 1000 years. Then he will move on to higher learning and be replaced by a senior Master.

In the Bible Christ is called The Father (Isaiah 9:6) and of course, the Son many times. An interesting twist on this is that when Mary was overshadowed by the “Most High” the Christ was in her creating the miracle. Then when Jesus had reached maturity the spirit of Christ entered into him at the baptism. Thus during the three years that Christ was co-present with Jesus He was his own Father, literally the Father and the Son.

The first cause is often called the Father, but in reality it is Purpose which is neither male nor female. Through the power of Decision Purpose vibrated creating male and female energies or Father and Mother God.

The reason we associate the creator of the universe with Father is because the visible universe is dominated by male energy. That which is seen is radiant and radiant energy is polarized male. That which is not seen (such as magnetism and gravity) is female. As the unseen becomes more real to us God the Mother will become more real to the mass of humanity.

Because of the dominance of male energy in this visible world even the Brotherhood of light is partial to the male gender as far as the use of words is concerned. They see the idea of brotherhood and brother as having a universal application and call both males and females brothers. None in the brotherhood are offended because all realize they have been both genders in past lives and use both energies in the present.

One of the important teachings of the New Age will be the restoration of knowledge of the power of the female energy for it is as mysterious as gravity, but no form can be held together without it. Because the female energy is invisible it often is not recognized. But this does not matter to the female lights of the earth. Their main joy comes from an inner knowing of the real effect that they have had. The mother’s effect on a child is a great example. When the kid excels because of the teachings and influence of the mother the father may brag to his friends about the chip off the old block, but the mother sits back in quiet joy with the realization that her hard work has born fruit.

If a person has a psychological problem with using the male “Father” in the Song then it is best to use the word for God that is most comfortable to them. If he has a problem with the word Christ as in “the consciousness of Christ” then he should use “son of God. The important thing is to not change the meaning, nor drop any phrases. Those who are not ready for the energy of the Song will either cease saying it or change the meaning, thus not joining in with the unity of Spirit and Power created by it.

that within this light is complete protection from all destructive forces;

That the Holy Spirit of Your Presence permeates us in this light, and wherever we will the light to descend.

That the consciousness of Christ is lifted up in us in this love, and wherever we will the love to be enflamed.

We thank you Father that You are in us and we are in You;