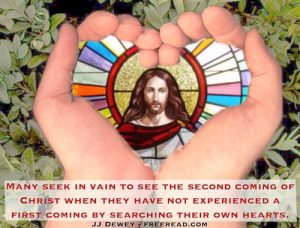 A new member seems to want some response from me about his claim that he is the Second Coming of Christ.

I try to make it a point in my life to look at any claim with an open mind no matter how outrageous it sounds.

The trouble is that our in-house messiah is not alone in making this claim. There are hundreds of them out there. Some of them even have web pages.

One who is getting some attention is Richard G. Patton from Canada. He wrote a Book called The Autobiography of Jesus of Nazareth. After hearing praises that this was a really credible and interesting book I bought it and found this Jesus quite a boring unconvincing guy. I couldn’t quite understand why many were enthused about him.

If you want to read it the name of the book is: “The Autobiography of Jesus of Nazareth and the Missing Years.”

Then a while back I read an ad in our local paper about a guy from Southern Idaho who claimed to be God (the God) and was going to give a seminar in Boise. This roused my curiosity and I attended the meeting with my friend Wayne. His followers testified to all kinds of miracles, but what took the wind out of the guy’s sails was his own presentation. Again this guy was extremely boring and I was surprised that he was surrounded with enthused disciples.

I didn’t feel the Spirit in either of these people.

We have now had the interesting experience of one of our members, who seems to be presenting the claim that he is the Second Coming of Christ.

Around this subject I asked this question: “If the real Christ were reincarnated and realized who he was then how do you think he would proceed with his mission?”

We have had some interesting responses. Of course, we must consider the fact that we could always be wrong, but the answers received seemed pretty down to earth and logical.

A reader started the ball rolling with an unorthodox but believable presentation. She uses the process of elimination to concur he would probably reside in Australia, New Zealand, Europe, US or Canada.

She sees him as being involved in enlighten business and being quite personable.

She makes the interesting statement that he is probably divorced. This is an interesting thought for many do not associate marriage with him let alone divorce.

Then she says: “I see his associates pressing him to be more public, to write a book, or run for office or something more public. I think his life will look very normal, but very good, yet he will be a catalyst for great changes and ideas. I doubt if the world is ready for him to announce himself.”

Another thinks “he would find a manner of integrating himself in order to influence thought.” She thinks this may include current music or video games.”

A third response says, “Exactly how it has been going, wouldn’t you say? “His” mission or our mission? Now is the time of responsibility. Now is the time to claim what some would prefer to give away!”

Another writes: “What makes you think the second coming will be any different than the first? He will come into His own and His own will know Him not.”

Question: His own at the last coming was the Jewish nation, according to the Bible. Do you expect him to come to the Jews again?

I liked this answer so well I can’t find anything to edit out: “I have thought about this many times. I think he would either get his start on a radio program or a church eventually write a book. More and more people would be talking about it and eventually he would achieve a massive following challenging the fundamentalists, politicians and business leaders. Making a lot of enemies because the “business as usual” philosophy will not be good enough anymore. He would offer us an alternative that rings true to us and we will wonder “Why didn’t I think of that before?” on many, many issues. Christ would be the voice that expresses what the majority feel and think but can’t express in words.

“Maybe a college professor or host of a Internet chat room any forum that would give him/her a platform for expression and a chance for people to question and comment on his/her teachings. I think that is very important if Christ becomes public that his work would be teaching and a big part of the learning process is the ability to ask questions.”

Still another tells us that his emphasis would be different thus time: “If He did it (miracles) now, millions would follow Him and be converted, that’s why He will not come again like He did before.

“I believe His second coming is turning on the light in each of us that He is indeed in each of us. In other words, baptizing us with fire and the Holy Ghost then leading us thru the mist of darkness to the tree of life, which is of course Christ in us.”

The interesting thing no one expects him to prove himself by doing miracles. Neither does anyone in this group expect him to come in a blaze of glory burning the wicked with the breath of his nostrils type of thing. The anticipation here seems to be that he will lead us to greater light, love and abundance.

It is interesting that the Bible tells us that he was tempted by Satan to prove himself with miracles. First prove to himself that he was the Son of God by changing the stones into bread and secondly to prove to others he is Christ by casting himself off a high tower and landing unharmed.”

He refused both of these temptations. But if these were temptations that were to be refused doesn’t it seem contradictory that he did many miracles that seemed to prove he was the Christ?

Not necessarily. Read his words carefully. After each miracle he never made claim to the miracle by any power that he had. Instead he said, “YOUR FAITH has made you whole.” Then he said “of myself I can do nothing.”

It is also interesting that Jesus also said (when a miracle was demanded of him) “a wicked and adulterous generation seeketh a sign.” This must be a pretty good group for no one is demanding that Christ perform a miracle for us as a sign.

Signs, of course can be very deceptive. Many gurus claiming to be a messiah merely perform magic tricks and some who perform real magic could still be on the dark side.

The one miracle that is a real sign of a teacher of righteousness is the miracle of the change of the heart and mind of he who discovers the inner Christ through the window of the soul.

Our would be messiah seems agitated with us because no one in the group seems to accept him on faith, but what is faith?

The word “Faith” in the Bible is translated from the Greek PISTIS and literally means: “a mental conviction one has proven true by argument or reason”. Thus if one has faith he will go to heaven he should be able to justify it by logical argumentation. One will notice that Paul, a big believer in faith, spent much of his time in logical argumentation.

The book of Hebrews gives an expanded definition: “Now faith is the substance of things hoped for, the evidence of things not seen.” Heb 11:1

We can again find that the Greek will give us a much clearer translation here. “Substance” comes from HUPOSTASIS and in modern translations it is usually rendered “assurance” or “confidence”. but in reality one English word cannot do it justice. It more literally means “That state of mind which supports an idea through a sustained effort.” “Evidence” comes from ELEGECHOS which means “to prove a matter true or false”. The word indicates that faith establishes the true reality. Thus a clearer translation of the preceding verse would be: “Now faith is having that state of mind which sustains that which is hoped for and reveals the truth of those things we do not see.” This definition corresponds much better with the root meaning of the Greek PISTIS which is translated faith.

If we have faith we can sustain an idea until it is proven true or false. It is never a blind unreasoning belief.

As I said in my last post there are hundreds of would-be messiahs claiming to be the Second Coming. If we were to have the blasphemous, or false faith, we would accept the first one to come along without asking questions. Instead, we must have true faith and find the evidence behind the things not seen.

Since anything is possible – including that Christ could join this group, then we ought to exercise true faith and instead of dismissing contenders out of hand we should let them judge themselves before us by their own words. We certainly cannot make any judgment without information.

So here are a few questions for our claimed messiah.

(1) Is your real birth name the one registered with the group? If not, what is it? Are you reluctant to give out true details about yourself? (2) How old are you and what do you do for a living? (3) Are you married? If so, what does your wife think of your claims? If you are not married what do your friends think of you and the miracles that you say happen around you regularly? (4) What brought you to the Keys group? (5) If the group as a whole accepted your claim to be the Christ what then? What would you expect of us? (6) On the other side of the coin, what do you have to offer us that is not readily available elsewhere? (7) Tell us three important things you wish to accomplish with your Second Coming? (8) What is your opinion of the writings of Alice A. Bailey? Are you capable of writing with this depth of thought? (9) Do you have any new principles to reveal? (10) Do you think that physical matter can travel faster than the speed of light? If so briefly explain.

Quote from the messiah in question: “Reality is that which, when you stop believing in it, doesn’t go away.”

JJ: Interesting statement, originally created by science fiction writer Philip K. Dick. However, this means that my ex wife is the most real thing in the universe.