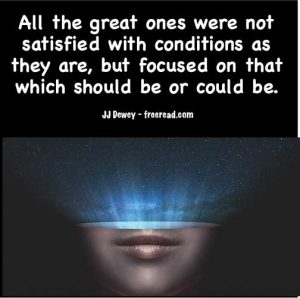 Question: Were the female partners in the Molecule of Jesus the wives or just partners of the apostles?

JJ: Note that in my writings I use the word “partner” instead of wives. In some cases the counter balance was a wife, but in others it was another female disciple.

In this day the principle of the male/female energy will be taught in much more fullness as the importance of the female role is much more accepted in this generation.

NOTE: A successful regression, which often gives accurate information, retrieved information from a person who was an Essene in the time of Jesus. Here is the text:

Question: When Christ comes again will we recognize him through soul contact?

JJ: You will know if you find out all you can on your own and run the information by your mind. When your mind has done all it can do, and if you are open to the answer, the mind will run it by the soul and you can know for sure.

Question: Why must one ask him questions when the soul can give you the true answer?

JJ: Your soul does not give you knowledge in the common way of learning. It gives confirmation and reveals principles. No matter how much someone knows and understands there is always someone else with greater understanding.

Christ will come to give us understanding more than knowledge.

You’ve talked a bout the Word of Power. Is saying this all that needs done to heal?

JJ: It has tremendous power if the Word of Power revealed by your soul. It is different for each situation and person and the healer must pick it up through revelation. Then too, it will only be revealed if the soul sees the person is ready for healing and there is a strong belief present.

This is just one of the aspects of the sacred word.

Question: Is the sacred name of GOD “I AM BECOMING THAT WHICH I DECIDE TO BECOME” Is this the scared name of GOD? That is his name if one spoke it would that heal the sick?

JJ: This is the principle behind the name of God but not the actual name in the manifested universe. This principle can be used for healing to him who understands.

Question: In chapter 138 on the Aquarian Gospel it says Jesus told a blind man to say the word and then wash his face. The man was to say the word jahhevahe. He was healed by saying the WORD. So what do jahhevahe mean? Is this another name for GOD?

JJ: This is a variation of Jehovah. This was a word of power to the people in that time and place. If Jesus had been among the Hindus he would have used a different word.

Question: Is it ok for a healer to try to heal the sick even if the sickness may be caused by karma and illness and debts due to stuff the ill person did in the past?

JJ: The healer should use the best healing techniques he knows. If the soul sees the person is ready to be healed then the healer can give great assistance. If not, then not much will happen until the lesson has been learned. The sensitive healer will pick up through the soul whether or not the person can be healed.

Question: What do you think about Reiki?

JJ: It is a good and gentle healing technique. It usually does not accomplish the miraculous but does send good healing energy that assists in recovery.

Comment: Also when I had my chakras re-aligned by a friend of mine last year, at the end of the alignment, when I had my eyes closed, there appeared in my mind a picture of Jesus’s face, (although His face was all white but I could tell He still had a beard and moustache). Next to Him was another figure all in white, like a robe, with really long hair, but I couldn’t see the face, and I’m not sure who this was, has anyone else seen this in their mind?

Question: Have you ever analyzed Lincoln’s handwriting before and after what may be the event of the walk-in?

I have never seen a sample of his early handwriting and can’t find anything on the web. It is said his handwriting was very beautiful when he was young. The samples I have seen from when he was president would not fit that description so this indicates a change. Advanced souls often (not always) have hard to read handwriting.

One must keep in mind that a walk-in would take over all the memories of the previous entity as well as the personality, learning habits and rays of the vehicles. This would cause the personality and the handwriting of the two to be very similar. Even so there should be subtle changes in intelligence and it would be interesting to examine. If anyone comes across an early same of Lincoln’s writing please let me know.

Question: What is the reason that advanced souls often have messy or hard to read handwriting.

Number one is often below average intelligence and number two is usually above average. Thus the messy writers are the best and the worst among us.

Of course there are exceptions to all things. Some with beautiful handwriting are very advanced, but others are not so advanced. An analyst can tell for sure when he looks at all the details in the writing.