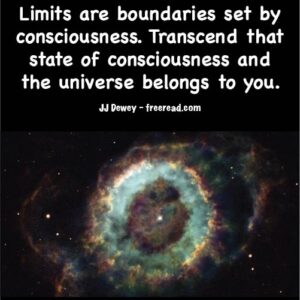 We received some interesting feedback over my post saying that God may not be all powerful as most believers assume. Maybe things are not so simple as Him just snapping His fingers and preventing war and calamities, for we are in the image of God and His (or Its) extensions. A reader protested saying that maybe calamities are designed by God to fulfill an ultimate good.

Every cloud has a silver lining whether that cloud was created by accident or design. Every situation can turn the tide for good or evil depending on how we respond to it. If humanity responds well to the latest tragedy, then it will work for the good of the whole. If we do not respond well then it could go the other way.

All the reflections of God are governed by time when they are in time and space and they are always subject to the law of cause and effect.

Even God cannot just snap his fingers and instantly make just anything happen because snapping fingers is not the appropriate cause to produce a major effect. God and his reflections have power as they gain knowledge for knowledge gives one power to manipulate cause to produce the desired effect.

Another reader insists that those things the new calls tragedies are a part of a divine plan.

There is a great plan, but even this is subject to cause and effect. There would be earth changes whether there is a plan or not just as there were earth changes long before man even appeared on this planet. There are changes taking place on other planets in our solar system not having humans on the physical surface such as Venus, Mars, Jupiter etc.

Great earthquakes appear periodically through the cause and effect of the internal workings of the planet. The Planetary logos can speed up a major occurrence, or slow it down, but he cannot stop the living planet from circulating its own energies.

Some catastrophes are timed for a lesson while others just occur at times that all lives on the planet have to deal with.

Reader: “According to the Bible, God created the heavens and the earth. So, I suppose people figured if he created it, he can control it.”

JJ: The end goal is to gain all power with the help of God’s reflections, but between the beginning and the end God is limited by time, space and imperfections therein. In the higher realms the life of  God has all power but the material world is so sluggish by comparisons that assuming control taxes all the lives incarnated therein. Overlooked is the fact  that this world was created as a great game to challenge  the intelligence   of God.

Perhaps the best way to understand is to put yourself in the place of the One Great Life.

You have just finished taking a great rest from working with your last creation. You awaken, stretch your arms and say to yourself.

What new challenge can I make for myself? I do not want to create a universe exactly as I did last time for I solved all the equations within it. This would be no fun. This time I will create a universe with tougher rules, greater problems and more challenges than I (and my reflections) have ever faced before. This new universe will challenge my mind and spirit to the maximum but I have faith that I shall prevail and attain even more joy than I did with my last overcoming with the universe past.

I will again be limited by time and space in the lower worlds, but in the end time and space will provide the seeds to their own mastery and all power and joy will come in the end, but first will come limitation, pain and tribulation.

Shall I shrink from pain and sorrow just so I can rest again or shall I take the leap into matter so I can have a fascinating experience?

I choose the fascinating experience.

You and I said “Amen” and chose the experience also.

God’s Power in Us

Question: Jesus calmed a storm in the Bible. He had power, yet GOD does not have any more power then we do? Why did (GODS) own refection (Jesus) have this power to stop storms?

JJ: I did not say that God does not have power, but in the worlds of time and space he has limitations. He manifests through his reflections which have the seeds of unlimited power within them. When that power within is discovered and nurtured then the power of God is increased in manifestation.

Jesus recognized his oneness with God and was thus able to bring some of the powers of God down to the earth. But even Jesus was limited. The Bible says he could do no miracles in his own town because they did not believe on him. He could not convince the Pharisees that he was a messenger from God. He could not even convince his apostles who he was until after the resurrection.

My point was that God’s power is manifested through his reflections – us. Every miracle in the Bible takes place through some human being dispensing it.

Let us look at what some consider to be modern miracles.

A man is stranded in a wilderness after a plane crash. Several weeks pass and search parties give up. The man’s father feels within that his son is still alive and does not give up. He goes on one more search alone and after much struggle he finally finds his son and saves his life. The son thanks God.

But, if the father did not use all the powers of God within him the son would have remained lost.

Even so, each of us must use the power of God within us to serve our fellow men. When we do this and afterwards hear one who is helped exclaim “thank God!” We then can rest assured that we are acting as agents of God’s power and more power will be forthcoming.

We never have the case of God coming down from the heavens and finding the lost man and floating him over to safety. Instead, God finds and saves the man through his reflections, you and me.

The very fact that time and space exist tells us that any life, including God, that manifests in them will be limited. This is illustrated in the conundrum of the question: “can God make a rock so heavy he cannot lift it?”

God made the earth, but because of the limitations of time, creation so far here has taken over four billion years.

All power is available to the reflections of God, but that power must be filtered through the limitations of time and space in this physical plane.

Question: Did God’s power grow in Jesus as he overcame his limitations?

JJ: Yes, and as we put God’s power within us to right-use it will grow within us.

Question: Is Christmas the real birthday of Jesus or something else?

JJ: Christmas occurs near the winter solstice or the first day of winter. Legend has it that the saviors of the race are born during this period of deepest night and darkness to lead us into the greatest light.

Since the church authorities did not know the true birth of Christ they thought that December 25th was as good as any, especially since it was already a Roman holiday centuries before the birth of Christ. On this day the Romans celebrated the Mithraic feast of the Sun-god. Also from December 17-23 they held a great festival honoring Saturn, the god of agriculture.

Early Christians were reluctant to celebrate the birth of Christ until the Church at Rome declared it as a day of celebration around 320 A.D.

Few scholars, however seriously believe that Jesus was born in December. For one thing shepherds were not in the fields during the winter.

Joseph Smith stated that he was born April 6th and some think this was also his resurrection day. Most scholars agree that spring was a probable time of his birth.