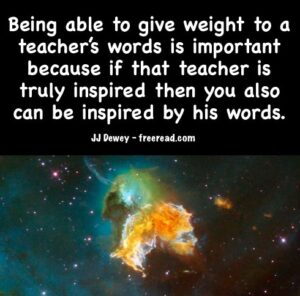 A reader asks from whence I get my teachings and authority.

First, let me point out one of the main differences between a true and false teacher.

The false teacher will insist that all his teachings are correct and are not to be challenged. If they are then the one doing the challenging or even in a state of non-belief will be excommunicated, ostracized, rejected or something similar. If a follower comes across something that does not sound right, he is expected to adjust his belief system so all the teacher’s words can be accepted as being correct. If for any reason the disciple cannot do this he is, at the least, expected to remain silent on all disagreements and play along as if he swallows the whole ball of wax.

The true teacher does not expect anyone to accept what he says just because he says it or because he alone represents the mind of God. He expects the student to carefully weigh his words using his mind, reason and common sense. Finally, he is expected to run the principles by his own soul. If all registers as correct then it is well and good that he incorporates the teaching as serves him best.

If the student has soul confirmation time and time again on the teachings, then the teacher’s words tend to carry an earned authority so even if the teaching seems odd it may still carry some weight, but even here he waits upon his soul for final confirmation.

If the student finds that a particular teaching of one he respects does not register with his soul then he is not expected to accept it. He is free to either outright reject it or to put it on the shelve and see if it fits in later.

If you talk with my strongest supporters you’ll find that most of them will have several teachings I have given out that they have not quite been able to accept. After all, I have published several million words of teachings on the internet covering a very wide range of topics, some quite controversial, and few will accept every one as gospel.

This is as it should be in the dispensing of teachings of light. No teacher is perfect, but neither is there a perfect student. No teacher will be flawless, but neither will any student be able to flawlessly understand or see all the truths taught by a teacher.

Many have asked me where I get various teachings. It matters not where I get them. If I try and make you think they are from the infallible mind of God, then I set myself up as an authority or a part of the power of the beast.

What matters is you read them, contemplate them and take that which registers with your soul. If something does not so register then you are under no obligation to accept it.

One thing to keep in mind, as far as the Book of Revelations goes, is it has to be interpreted using the Law of Correspondences and it has several levels and layers of meanings. One cannot say that one interpretation is the only one. The main thing to look for is to see if the interpretation fits in with the law of analogy.

In my life I have found no teacher with whom I agree 100%.

Teachings that have assisted me upon my journey have been the scriptures, the teachings of Joseph Smith, A Course in Miracles, Djwahl Khul through Alice A. Bailey and a number of others. I have points of disagreement with them all but this does not negate the fact that I have had many things from these past fallible teachings confirmed by my soul so I see the principle behind them, which principles are eternal words that shall never pass away.

One of the biggest problems a true teacher will have with students is caused by his virtue of allowing the freedom of thought. If the student is black and white in his views and feels that if one thing the teacher gives out is wrong then all is wrong he will eventually fall away from the teacher. Eventually every true student will find a flaw in a true teacher.

The test is always this. Can he look beyond the flaw and see the good, the beautiful and the true and true and not let it pass away from his consciousness?

The flaw seen in the teacher may be one that is projected from the mind of the student or it may be a true flaw. Either way, the truth is true in the other teachings and needs to not be rejected, but embraced.

I was  asked about the place in the scheme of things between Adam, Christ and the Ancient of Days

There have been many Adams. The Christ was the last Adam around 6000 years ago, but the first was the Ancient of Days or the Planetary Logos who incarnated 18 million years ago.

Response to a reader about infinity:

What makes you think everything is already created? There is nothing that gives evidence of this.

Why do you think that God is not expanding nor is capable of growth?

Do you have any reason other than someone told you so?

People only believe such because they have been told to believe it.

Question: After so many years, this is still confusing. When we pray to the One God or the Father, who is it? The Ancient of Days or the Solar Logos?

JJ: When a cell needs assistance it sends forth a cry for help, or a prayer so to speak. Sometimes the need is sensed by a fellow cell, sometimes by a group of cells, sometimes an organ and sometimes the whole body if the need is felt by a large enough number of cells.

When we pray we send our prayers up the pipeline to the consciousness of the one God and if the prayer is one of faith it will be heard and answered by one of the many lives of God in touch with the Oneness Principle.

To sum it up we can say that you do not pray to any individual entity whether it be Christ, the Solar or Planetary Logos, but to the one God. In doing this your prayer will ascend according to its note and vibration to be picked up by one of the reflections of God who is in tune with the whole.

There art two cardinal sins from which all others spring: Impatience and Laziness. Franz Kafka (1883 – 1924)