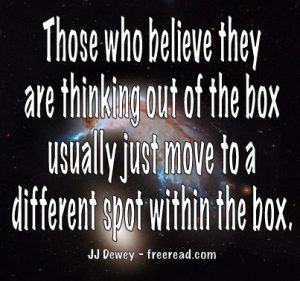 Reader Comment: I am concerned that you seem to be saying that if someone follows the highest that they know ‘at any one point in time’ and it turns out to be wrong, then they must be emotionally polarized.

JJ: Of course all people are wrong at times including the mental. I never suggested otherwise. Let me expand on the point I was making. I was talking about situations where there are not large missing pieces to the picture, where all the necessary facts to see the truth are available. In this circumstance, the mental person will attempt to put aside his preconceived notions and see the point of truth – the big picture. If a person resists putting the facts together to see the obvious conclusion and sticks with his feelings then this is a sign he is emotionally polarized.

Comment: I know of several advanced initiates who have not made up their mind on the war in Iraq. Does that they are emotionally polarized?

JJ: Indecisiveness in the face of a plethora of reliable information is a sign of emotional polarization, but there are exceptions to all things. I would have to become acquainted with your friends to make an intelligent judgment.

Overall indecisiveness and neutrality during war is discouraged by DK. For instance he states:

“When the war broke and the entire world was hurled into the consequent chaos, horror, disaster, death and agony, many spiritually minded people were anxious to stay aloof from the struggle. They were not the majority but a powerful and noisy minority. They regarded any attitude of partisanship as an infringement of the law of brotherhood and were willing to sacrifice the good of the whole of humanity to a sentimental urge to love all men in a manner which necessitated their taking no action or decision of any kind. Instead of “my country right or wrong,” it was ‘humanity, right or wrong.’

“This necessarily placed the Hierarchy in the position of not endorsing the Axis position in any way. Many in the goodwill work and some few in the school interpreted this as political in import, presumably believing that a position of complete neutrality, where both good and evil are concerned, was demanded of spiritually inclined people. Such people fail to think clearly and confuse an unwillingness to take sides with brotherly love, forgetting the words of the Christ that “he who is not with me is against me.” must preserve the spirit of goodwill, even when using force, which is the only means of conquest the totalitarian powers understand.” Externalization of the Hierarchy Page 784

Here he speaks negatively of “taking no action or decision of any kind” during a crucial war. Note also he quoted the same words of Christ that George Bush roughly used: “he who is not with me is against me.” Thirdly, notice that he states that there are times that force must be used for this is the “only means of conquest the totalitarian powers understand.”

Here is another quote: “The German is as dear to the heart of humanity, to God, to Christ and to all right thinking people as are any other people. The German must be rescued from Hitler’s world order as much as the Pole, the Jew, the Czech or any captive nation. In effecting this freedom, the allied nations and the neutral powers must preserve the spirit of goodwill, even when using force, which is the only means of conquest the totalitarian powers understand.” Externalization of the Hierarchy, Page 189

This was an enlightened statement during World War II but let us change the names of the countries representing today’s world (2003).

“The Iraqi is as dear to the heart of humanity, to God, to Christ and to all right thinking people as are any other people. The Iraqi must be rescued from tyrant’s order as much as the Cuban, the Kurds, the North Koreans or any captive nation.”

Here is another great quote: “Which way will humanity go? Will it go the way of selflessness, expressed in a willingness to act always in the interests of all, thus promoting world understanding and world unity, or the way of selfishness and aggression, expressed in an intense nationalism, thus sacrificing the true and larger values of liberty, independence and freedom to think. This selfishness may show itself through active aggression or an active neutrality. Those nations who participate in no way in this struggle will lose much and-enhancing their own selfish struggle and clouding the real issue in beautiful words-will help to prolong the struggle and hold back their own people from useful opportunity.” Externalization of the Hierarchy, Pages 129-130

Notice that neutrality enhances selfishness. These indecisive ones cloud “the real issue in beautiful words.”

It is an interesting fact indeed that many who are either neutral or oppose the war often write song and poetry which cloud the real logic and only serve to “prolong the struggle.”

Let me offer one more quote from DK: “You will then be able-if you are sincere and clear-thinking-to work for that group within the whole which seems to you to embody the highest possible activity and aims, and you will relinquish that attitude of futile negativity, smug neutrality or bewildered confusion which may distinguish you. You will then emerge from the glamour of propaganda and of world illusion into the clear light of your own soul, whose essential nature is love and selflessness and whose major aspiration is to bring peace and goodwill among men and to see the consummation of the mission of Christ.

“This will lead eventually to the disappearance of so-called neutrality upon earth-a neutrality in act, for there is never neutrality in thought.” Externalization of the Hierarchy, Page 216

It is interesting indeed that the coming of Christ will cause the disappearance of neutrality. Why? Will he utter the same words he did in ancient times that “he who is not for us is against us?” Will he be so polarizing that all will either love or hate him?

An interesting point is that he states that “there is never neutrality in thought.” If we take this statement at face value then he who honestly examines his thoughts will always know which side he is on.

Whatever the case, this is not the time for disciples to be indecisive or neutral toward any conflict. The truly mentally polarized will seek to gather the facts and make a decision. For the disciples, a part of the facts to be gathered are the teachings of DK as partially mentioned above.

A reader quotes me as follows: “To take the facts and come to an incorrect conclusion is a sign of emotional polarization or being in transition at best.

Question: So are you saying that sometimes one can also make a mistake but remain mentally polarized?

Yes, I’ve said that numerous times. No one is infallible, not even the Masters. The mental person can come to wrong conclusions because he is missing data or because he makes mistakes in putting the data together, especially if the situation is complicated – as in the Vietnam War. The Gulf War is much more simplistic.

Comment: Maybe I misunderstood. I thought you were saying that a mentally polarized person had to give a Yes or No answer.

JJ: I never said he “had” to give an answer. I did say that a mentally polarized person is usually willing to give a yes or no answer when it is requested.

The situations I have been referring to is where a yes or no is easy to mentally ascertain and thus an “I don’t know” would rarely fit into the equation.

For instance, when I am in an argument I will often ask a yes or no question, but I will only ask such questions to which the other person will know the answer if he mentally reflects. If two people disagree yet will question each other for knowable answers they will often achieve unity of thought – if both stay on the plane of the mind or higher.