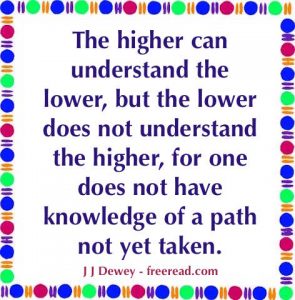 Reader comment: Personally I’d say it is only in the last year I have become mentally polarized, and I have indeed noticed the difference. My thoughts or perceived point of consciousness within the mind no longer flit between the left and right hemispheres. An interesting consequence of this is that stereo music now sounds more like mono! I now think with better clarity and a better filtering mechanism for emotions, especially negative ones. I put much of my progression down to esthetic support structures which I feel are in place. These I feel are both internal and external. (Do I hear an hallelujah?)

JJ: I’m glad you brought this up so we can bring up some additional clarification to some who may not yet understand. It is obvious you are attempting some humor here but what is not clear is if you truly believe that I have been presenting a mental polarization as meaning that the mind only is at play to the exclusion of the emotions. I would hope that none have seen it this way because I have said the opposite many times in my writings. Just in case any misunderstanding yet exists let me repeat the principle.

To be mentally polarized does not mean that you are like Spock attempting to have no emotions. A mental person is more like Kirk, who is very logical but with a strong emotional side. Even though Kirk often operates from the intuitive level, the intuition only comes into play during points of tension and often defaults to the mind in normal decision making.

It’s a little like the functioning of a corporation. If you have 51% of the stock then you have control. Even so the other 49% of the stockholders still have a strong influence.

Mental or emotional polarization is determined by the force that dominates your decision-making. This is the key. It is not determined by how strongly you feel about the matter.

Reader comment: Interesting quotes you produced from DK disagreeing with pacifists but anyone could find a quote from DK to support their position; you should see what the pacifists have used! 🙂

JJ: It is true that one can use DK, the Bible or other writings to seemingly support any position. Those on the emotional plane can often be swayed by quotes that may distort an author’s position, but such distortions cannot pass by the plane of the mind unnoticed.

I would guess that over half of DK’s readers are pacifists even though he stood very strongly against such a thing when we are faced with a definite threat.

This misinterpretation comes because people polarized on the emotional plane see what they want to see.

My conclusion is that one cannot prove any position from DK’s writings to one polarized on the plane of the mind or higher.

I haven’t seen how pacifists use DK’s writings to justify their position and would be interested in looking at them if you have a quote or two available. My guess is that they would use his teachings on harmlessness. Perhaps they do not realize that he stated that pacifism in the face of a tyrant like Hitler is harmful and can cost many lives and extend suffering.

Comment: You mention George Bush as a second degree initiate but if he had any light he’d take on all those oil interests and take the US down the path of alternative energy technologies – like hydrogen fuel cells).

JJ: We’ll have to wait a while to see how he looks on hindsight, but he is vecry eco friendly and has a much more green friend ly home in Texas than has Al Gore or any environmentalist I know. He recently proposed (in 2003) several billion dollars toward hydrogen fuel research. Everyone seems enthused about this as if it were a panacea for energy, but such is far from the case. What few realize is that it takes more than one unit of energy from coal (the usual source) to produce a unit of energy available in hydrogen. Hydrogen creates few environmental problems (but there are some), but because the moving to this source would cause more pollution through coal burning than the current pollution through fossil fuel – this makes it a very questionable source at present.

What makes little sense is that every environmentalist I have ever heard interviewed completely overlooks this fact. This seems to give fuel to the fire of the theory that many environmentalists are against the free market more than they are in support of the environment.

Converting to the hybrid engine would give us much less pollution than converting to hydrogen as suggested by many – unless there is a breakthrough in the method of production.

Reader comment: Let me amend my mention of hydrogen fuel cells with that it was actually solar hydrogen I was thinking of. As implied this uses solar energy to split the water molecules and produce hydrogen. This would require advances in solar panel technology to provide a nations worth of solar hydrogen, but it does have potential.

One site tells us that it would only require land the size of North Dakota to produce enough solar power to create the necessary hydrogen for the United States.

Then what do we do when our need for energy doubles in forty years? Will South Dakota disappear also with maybe my state of Idaho being next on the agenda?

There is a simple solution using current technology and others I am sure will surface soon.

Producing the materials (vast quantities of steel, glass, and concrete) for deployment of a solar hardware requires about 3% as much coal burning as producing the same amount of electricity by direct coal burning.

The greatest pollution problem is space and this item alone will prevent standard solar energy from ever supplying more than a couple percent of our energy needs unless we achieve significant advances in solar efficiency.

Consider this. If we could convert 100% of the sun’s energy into electricity, a square foot of land at the equator would supply enough energy to light a 125 watt light bulb. But then if we take the night time the variable weather into consideration we would only have enough for a 22 watt bulb. The big problem is that we can only convert about 10% of this into energy (in 2001) so this reduces the power to 2.2 watts. Finally if we move our solar collector to a more probable location in the United States the power is reduced to less than one watt.

To build a solar energy plant equal to the power of a typical coal burning one of a billion watt capacity then would occupy a space of 50 square miles. (Note This was written in 2001. Thanks to technology increases that area has been reduced to around 15 square miles in 2020 in an area of high sun. In areas of low sun we could still be at 50 square miles)

To even come close to supplying our energy needs we would need about 500 plants which would require (figuring maintenance roads and access) 25,000 square miles of ground which is equal to the surface area of Connecticut, Delaware, Rhode Island, New Hampshire and New Jersey combined. (Figures taken from The Environmental Case for Nuclear Power by Robert C. Morris)

(NOTE: This source was a few years old. It is interesting that the current estimate I noted earlier was 70,000 Square miles)

It is true we may have a breakthrough in energy conversion, but even if solar efficiency doubled from 10% to 20% it would remain impractical as a large scale energy source.

Solar enthusiasts believe that all we have to do is increase solar efficiency, but achieving 100% efficiency with any energy source is near impossible. We are likely to make small improvements in solar power but a large leap using solar panels is not likely, and depending on such requires a leap of faith indeed.

Also here is an excerpt on hydrogen power: The Hydrogen Engine The second innovation not on the market yet, but expected within five years by Ford Motor Company is an engine that uses hydrogen fuel cells. Mazda is also working on one that uses their rotary engine.

As you know water is two parts hydrogen so the potential supply is as unlimited as the ocean. A hydrogen engine burns no petroleum at all and pollutes much less. The greenhouse gas of carbon monoxide is not released. Even so there is some pollution. Because it burns at a high temperature it causes the nitrogen in the air to chemically react with oxygen to form nitrogen monoxide which further reacts to form nitrogen dioxide which is a pollutant.

At present most hydrogen is produced from natural gas so we are largely trading one clean fuel for another in its production. Extracting hydrogen from water takes large quantities of electricity which requires the burning of substantial quantities of coal which of course pollutes the air.

Another problem is that for some time to come the burning of hydrogen would cost over 50% more than gasoline. This is largely because it take more energy to create a unit of hydrogen fuel than the fuel releases.