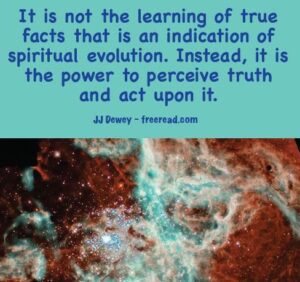 We’ve received a number of comments concerning right perception as covered in my book, “Eternal Words.”

Remember Right Perception is different from physical seeing with the eyes or hearing with the ears. Jesus hinted at this when he said “he who has eyes to see let him see.”

Right perception is much more than taking in light through the physical eyes, but consists of seeing or perceiving correctly.

Two eye witnesses can give different accounts of the same event, but both had eyes that saw the same thing. Even so, there is a Right Perception and that was what actually happened.

Keep in mind that Right perception is the key that leads us in the direction of the understanding of the Third Key for which there is no exact word. This is why the group gave many words that circled around the principle.

Quote from the book:

“Look, hear, feel, taste, smell and understand. During this next week you will retain some of the charge I have given you and will be more sensitive than normal. Apply yourself and reflect on how all three keys interplay as well as applying the third Key of Perception. Always be aware of what is available to perceive.”

Question: Is the name of  the third key one word or two?

JJ: Perception is accepted as the Key Word, but Right Perception just helps to clarify.

Comment: You sometimes come up with concepts for which no exact word is available. Have you ever considered coining new names for concepts which don’t have names yet?

JJ: So, you want me to become like Robert Heinlen. Grock was one of the best new words of all time.

Usually, if one can find a current word to use that comes close, it will help with the understanding. Besides, I would have to be fairly well known to cause a new word to catch on. I have coined new phrases though such as Molecular Relationship, Gathering of Lights, Divine possession, and a few others.

A reader posted an interesting story a while back giving an insight into perception. Here it is again:

Magellan’s Ships and our Ring-Pass-Not

When I was about 20 studying anthropology at university, a lecturer told a story about Magellan’s trip around the world in 1519. Apparently, Magellan’s fleet of high-sailed ships would sail into the bays of primitive islands and the natives would be extremely fearful upon seeing the great vessels which were far greater than anything they could conceive of building. It would take some time for them to get used to both the ships and strange men but eventually, they would lose their fear and accept what their eyes showed them.

But on one occasion, the fleet pulled into a bay (if fleets can ‘pull in’) and to the surprise of all the explorers, the natives took no notice of them whatsoever. They simply went about their normal activities as it the fleet wasn’t there. It wasn’t until the crew got into smaller boats and came in closer that the natives reacted – and with even greater terror than their neighbors. They ran screaming into the island’s interior and it took weeks and numerous search parties to find them and reassure them that they were safe. But here’s the crux of the story. When the crew finally calmed them and learnt enough of their language to communicate with them they found that these particular people didn’t react to the boats because they couldn’t actually see them! The ships were so far beyond their consciousness that they were literally blind to them. This true story made a big impression on me and I have spent the rest of my life straining to see what is just beyond my consciousness as I know there is so much yet to see.

In esoteric language, this is referred to as ‘ring pass not’ which is like the outer perimeter of our consciousness, the boundary which we cannot pass unless we extend it.

All that IS is ever present. As we grow in consciousness/awareness and develop our skills of perception we are able to take in more and more of all that Life has to offer. The only difference between us and the natives who saw – or didn’t see – Magellan’s ships is that we know we have nothing to fear and every extension of our vision brings us closer to the source of All so that in time, we shall see Him as he is because we are like Him.