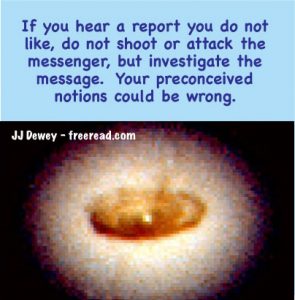 We hear a lot of talk about Donald Trump, and often his supporters, as being deplorables, racists, fascists, Nazis, bigots, white supremacists, KKK lovers, climate deniers, enemies of the environment, women haters – just about everything except persecutors of cute baby kittens and that may be coming next. Surely of all people he must be on the dark side, right?

We have two sides here. Donald Trump and his voters and those who voted against him. This include not only Hillary voters, but many of his own party as well as voters for minority candidates. Let us apply the seven ray light and dark qualities test to see which side leans to the right or left hand path.

The First Ray is represented by selfish and unselfish intent. Now many jump to the conclusion that Trump has selfish intent because he is rich and the media group think portrays him as the epitome of selfishness.

Spiritual students are often too quick to judge people with money as being evil as pointed out by DK who stated:

“Yet the results of their application to science or their accumulation of the crystallised prana (money) of the financial world are turned to the helping of mankind. This will be a hard saying for some of you who rate an irritable remark by a co-disciple as something disgraceful and belittle the efforts of the money-maker, and do both with a sense of self-righteous congratulation.

In context he is saying here that people with money have an important place in the plan if they have the intent to use it to help mankind and many judge incorrectly about these people while patting themselves on the back “with a sense of self-righteous congratulation.”

Now reading the intent of a person’s heart is a subtle thing and many get it wrong. I know that throughout my life many have read my intent incorrectly. Nothing illustrates that good intent is difficult to see more than the story of the Christ. We agree that if anyone had good intent it was him, yet the religious authorities at the time thought he had the intent to destroy them and was in league with the devil.

Only through intimate association or spiritual communion can we read the intent of a person’s heart correctly. Therefore, it is wisdom to give the other guy the benefit of the doubt. No matter how much I dislike a person’s actions I make it a policy to restrain myself from judging selfish intent. On the other hand, if I see evidence of unselfish intent I see no harm in expressing this.

In this case we will just look at evidence from one side since he is our designated president and Hillary whether for good or bad is out of the equation.

The main question of concern here is, whether Trump sought the presidency for personal glory or to serve his country and the people.

What I do is listen to what the person actually says and Trump says he is running because America is in trouble and he thinks he knows how to fix it and wants to do it not only for himself but for all Americans.

Now it would be easy to say he is just running for fame, glory and ego, but all politicians show signs of this and sometimes the ones that are best at presenting a good image are the worst and are as a lion among the sheep.

Trump is in the Guinness Book of Records as making the biggest financial comeback of all time and this is what America needs as it is almost $20 trillion in debt and we need someone to take us out of the hole or we face financial doom which will make the global warming problem seem miniscule by comparison.

He says he wants to make America great again so let us sit back and see what he actually does as president. After a year or so passes we can then analyze and perhaps be more accurate in judging his motives and whether he is really trying to serve the people rather than just himself.

It is my opinion that he ran for president because he thinks he can be of service to our country and that most of our past presidents ran for this same reason. Good intent does not make one right or successful though as other ingredients must be in play.

While the first ray quality of intent is difficult to judge as evidence is subtle the qualities of the other rays present more evidence so the demarcation is easier to see.