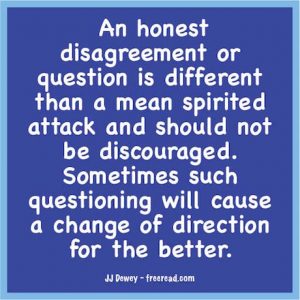 A reader asks: How about you? Have you read anything in the Alice A. Bailey writings that make you question or with which you disagree?

JJ: There have been a number of things that threw me for a loop when I first came across them, but after approaching them with an open mind, doing research and contemplation I have resolved most of them.

There are a number of his teachings of which I do not have a enough information to pass a full judgment and cannot verify as true or false from an intellectual standpoint. These are also teachings that I cannot rule out, but because he is an earned authority with me I continue to think upon them. Usually more light comes when I do.

Another point of interest is that I have often received knowledge and principles independent of any material that I have read and when this happens I often will later be reading DK and there it has been hiding all along. When this happens I see why I missed it because he hints at or talks around what I have received. When I see an insight I received that was hidden in his writings I then know that he also knows.

The only other writing this happens with is the scriptures. I will receive something and then discover it is subtly taught already by Jesus or one of the prophets that few have ever noticed.

When he leaves metaphysics and discusses politics, current events or problem solving I can usually see his point but sometimes I think his vision is not expansive enough because he lives such a sheltered existence. As I have said, a beaver can build a better beaver dam than a human and a human can solve certain human problems better than the masters. Where the attention of a life form is, there will be his talent.

A reader comments: I have read some of AAB and quite frankly I don’t see the great disparity of intelligence that you claim. Perhaps that “intelligence” is mostly just a talent for obfuscation?

JJ: I’m curious how much of DK you have read. Have you read 500 pages or more?

If you have read a book or more of each of these two I’m surprised you do not see the wide chasm of difference.

To me the difference is as great as that between Barbara Streisand and Einstein. You only need about a paragraph from each to tell they are written by two different people.

Read over the 14 rules of while magic, for instance. If you then read through all the writings that Alice A. Bailey wrote on her own you cannot find one statement equivalent to the least of them.

I would say it would take about 100 pages of Alice A. Bailey’s personal writings to equal the light in one page of DK’s. This is a huge difference to me that testifies that Alice A. Bailey could have never written the DK material on her own.

I am sure that a sample of DK’s handwriting would look much different than Alice A. Bailey’s. I could probably come pretty close to guessing what it would look like.

Reader: I have no particular reason to believe that she was deliberately deceptive but that doesn’t mean she was absolutely correct as to the source.

JJ: This is something we must always consider until it is either proven intellectually or by soul contact. There are many who claim to represent a master who write with enough believability to capture the minds of many when their source is not connected to the Brotherhood of Light.

Reader: As I mentioned before, multiple personality disorder is one possibility (and the other “personality” could have demonstrated greater apparent intelligence – a very difficult quality to measure accurately.

JJ: The problem is that Alice A. Bailey never showed any signs of multiple personalities. She led a very regulated orderly life and was known for her consistency. There is also no troubled emotional state in her handwriting. It is very obvious in the handwriting of people with this disorder. I have never heard of a multiple personality showing a far superior intelligence to the original personality. A personality change does not cause a rise in consciousness.

Reader: Mostly I see a lot of incomprehensible verbiage, which in itself is highly suspect in my opinion.

JJ: Actually, a lot of people feel this way when they first start to read him because he is difficult to understand in the beginning. He makes no apology for his writing style. Instead, he says this about it, as I recall: (1) He says his writings are not for everyone, but will truly be understood by a small handful. This small number of individuals will then present them to the world in their own way.

This is what I do in this group. Even though DK is not my only source of teachings his books are a major one and many of my writings you enjoy were inspired by something he has written. When this happens I take the principle and attempt to put it in easy to understand language.

(2) He says he does not write to give out easy to understand data. He writes from the “universal to the particular.” In other words he writes around a subject or principle without actually giving it to you in easy to understand language.

Why does he do this?

He says he does this so the disciples of the world who read his material can practice using their intuition and find the core meaning on their own. When this happens the seeker will have much more than a memorized piece of data. He will then own the principle and have a deep understanding.

This method makes perfect sense to me for there have been many times that he has circled the principle, hinting at it, but not outright blurting it out. Then the flashing forth comes and I understand and I take great joy in the light revealed.

This has never happened with Alice A. Bailey’s material that she wrote herself.

If you find the writings difficult should you just give up? No. You must do what I did. At the time I read the first book almost every other sentenced seemed to attack my cherished beliefs, but I recognized a great intelligence there and I literally forced myself to read on. It was not long before 2+2 began to equal 4.

One thing that will help a new reader (something I did not have when I started) is to get a glossary of Hindu Buddhist and Theosophical terms. Look up every key word you do not understand. This will make reading slow at first but it is well worth the effort.

Google “Occult Glossary.” This will be a big help.

Reader: After all, of all these “invisible” planets why did HPB and AAB pick “Vulcan” which just by chance was something science believed at one time (but was later disproven)?

JJ: I would not be surprised if Vulcan were discovered some day, but I also would not be surprised if there were no Vulcan at all. It is possible that DK mistakenly put the planet into his astrological calculations, but even a master can make a mistake. This would not nullify the many truths he has revealed that are confirmed by the soul. Most students however, believe that Vulcan exists in etheric matter invisible to the human eye.

Reader: How about all those other “facts” she gave that we can’t check out? That in particular bothers me. If I can find obvious fault with what can be questioned then I am doubly suspicious of that which cannot be.

JJ If a teacher gives out a few fantastic facts now and then, you are right. They cannot be verified. BUT when a teacher writes millions of words in 20 books there are enough facts to build a case.

I have said that a principle can reveal a thousand facts, but it also works the other way around. A thousand true facts are pieces of a giant jigsaw puzzle that start to paint a picture of a principle.

The facts of a false teacher are not true pieces and paint no picture of a greater principle. But the facts of a true teacher begin to add up to principles after they are put together.

This is a quality I have found in the DK writings. After a while his facts add up to principles and speak the language of the soul.