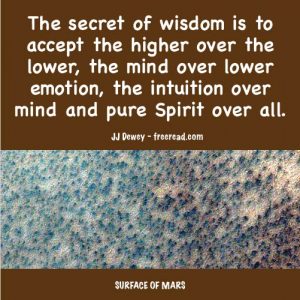 Power of the Personality

I was asked why I brought up the subject of the discerning of the beings of light and dark.

There are several reasons for this, the first being that it falls along the current subject line of the Law of Vibration. There is a difference of vibration between the light and the dark entities and the understanding of the law can aid in the discernment between the two.

But an even more important reason is that the uninterrupted progression of the seeker depends on him or her coming to an understanding of the process of discernment, otherwise he is likely to be deceived into switching his attention from spirit to form and waste numerous lives in retrogression and pain before he comes back to the beginning of soul contact.

Question: If a Dark Brother cannot duplicate the Holy Spirit then how could he trick one (who has felt the Holy Spirit) into thinking he is in the light? Give us some thoughts on this we have not covered yet.

In my last post I talked about the power of the deceptive dimmer switch and the importance of keeping our minds “steady in the light.”

But the fact to keep in mind is this. Even those who are steady in the light and close to achieving this have many distractions pulling at them through every day living.

He who is steady in the light has distractions just like everyone else. The difference with this person is that he has made it a habit to reflect and focus on the light before the distraction can take him very far away from it. Often he will force himself to return in consciousness to the light even in the midst of a distraction.

Because the habit of focusing on the light is so ingrained upon him he can be trusted by the Teachers to never let that dimmer switch turn to the extent that the full light will be able to startle him of that the shadows will seem real.

Few, however, have achieved this and instead of having a habit of turning to the light the natural instinct of most is to have a habit of following the line of least resistance and just take in the atmosphere of the situation as the light dims without concerning themselves with subtle influences.

Because of a constant source of distractions and a lack of forcing themselves to turn back to the light the average seeker generally operates as if the dimmer switch has made the light shine at 50% strength. Sure he has had several experiences where he has seen the light at 100 percent and had soul contact on a number of occasions, but perhaps it has been a while since he has felt the contact and has not noticed the difference between then and now.

This is the situation of many who have moved some distance upon the path when they receive temptation.

And most yield to the temptation several times and follow a number of strange paths before they return and again to center themselves in the light. But, after one has spent several lifetimes suffering the pain that comes from leaving the path, the seeker will then proceed with greater firmness than before and eventually arrive at the true process of holding steady in the light.

Many that will read these teachings have in past lives wandered off the path several times and are in danger of doing it yet another time or two before the journey is solidified. The benefit, therefore of understanding the Law of Vibration and the advice given here is that it can save such a person from wandering off one more time and taking one more risk of merging with the dark path.

DK tells us that fortunately those who wander off the path are given painful reminders from their souls that will bring most of them back and only a few ignore all the signs until they become completely lost in the dark.

Since there is always a slim chance that the dark path can be taken by he who wanders from the light the seeker must maintain an eternal vigilance for staying in the light.

Secondly, even if the dark path is not taken who wants to spend several wasted lifetimes that end in pain and despair?

Thirdly, who wants to fall behind in the progress of his friends and group to which he esoterically belongs?

When we talk about those who may deceive us are we talking about mortal or other worldly entities?

The answer is both. The principles of avoiding deception with both is basically the same.

One of the main reasons the dark teachers have power to deceive seekers is because of the difference in the presentation of the soul and the personality.

Visualize two teachers teaching two separate groups of 100 people. The first is giving out some very profound truths of quantum physics, but speaking in a very low monotone voice using very few hand gestures. To understand what he is saying you have to pay strict attention. If you look over the audience of mostly average people you will see that about 98 of the hundred are nodding off, not learning anything and completely unimpressed. But, there are two souls who are listening intently and if you look at them you will see that their faces are full of interest and awe, as if they are hearing the most wonderful words ever spoken. The alert two look at the 98 bored ones and sigh as they realize what they are missing because they refuse to pay attention.

Now we move over to the other group and see an entirely different situation. Here is a speaker as well as a performer that would put Tony Robbins to shame. He is explaining to the group how they can achieve anything their hearts desire whether it be wealth, love, fame or whatever. This guy, however, does not speak softly and does not put his audience to sleep. His voice variety goes up and down – he almost shouts at times to make a point and moves with such forceful gestures that at one time he knocks he podium off the platform.

In addition he struts among the audience and pulls several out of their seats and contrasts their failed past with their bright future with such fervor that they almost feel they have had a born again experience.

Many in the audience think there’s something different about this guy as they seem to feel the energy of his presence as he merely walks by them and the fire in his eyes as they look in his direction.

Now the interesting thing is that the opposite is occurring in audience reaction. Here we have no one nodding off and 98 of the hundred and extremely impressed and want to hear more from this guy.

But there are two who are not impressed. These two are not paying attention to his loud emotional voice, nor to his strong gestures nor to his sway over the audience.

What are they then paying attention to? These are the only two who are analyzing the speaker’s actual words to see if they have substance – and after analyzing them they are not impressed. The speaker did keep them awake but did not convince them he had something of value.

The soul is like the first speaker. It has something of great value, but speaks softly without appealing to the personality. When the seeker learns to discern between fluff and substance then he is ready for the path wherein the soul lies.

The second speaker is a the voice of the ego. It is interesting and appealing to all who exist on the personality level. It seems to the natural man that the soul will only bore us to death but the ego has life, vitality and the promise of all the joys of the world.

Now we must keep in mind that this comparison only gives us a hint as to the subtleties of discernment for many soft spoken teachers bore us because they have nothing to say and some speakers who do use the assets of the personality can touch the soul.

Therefore, if the seeker allows the dimmer switch to turn down the light of the soul the energy of a strong personality may seem much more powerful and good than anything he has felt from the soul. And do not be deceived into thinking that you will always feel a negative energy when personality energy is exuded by a pawn of the Dark Brothers. To many beginning seekers, it seems very good, positive and beneficial.

Thus the great deception begins in so many who have their Sun eclipsed in the dark by the reflective light of the moon. When the sun then does not rise in the morning it seems that the moon is now the brightest object in the celestial sky.

But the sun is still there as always. He who wanders off the path merely sleeps during the day and needs to be awakened again. Then he will see the light which never faileth.

Question: This gives us an idea of a tactic that an earthly teacher can use to deceive, but how does an other-worldly entity deceive through the personality?

My favorite comic, Steven Wright, uses very little personality in his delivery because his words can stand by themselves unlike many who use emotional antics to get a laugh.

I had to stop driving my car for a while…the tires got dizzy. Steven Wright