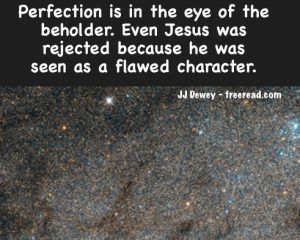 A reader asks: “How do we become perfect before God? If God Itself is not perfect; but is instead that which is becoming, is there then no perfection before God? Ahhhh, but I say there is:

“For we know in part, but when perfection comes, the imperfect disappears.” 1 Cor 13:9

JJ: We eternally are in a state of becoming because there is no ultimate perfection. Such a concept is illusion. The Masters use the term “relative perfection” because any concept of perfection is relative to the fulfillment of some objective.

The scriptures agree with this and in relation to Jesus or Deity never uses the word perfection as it is meant in English today.

A reason that people accept Jesus as God is because they see him as being perfect. Actually, there are more scriptures that talk about the perfection of the saints than that of Jesus. There are two referring to perfection in relation to him.

In the first Jesus said: “Behold, I cast out devils, and I do cures today, and to morrow, and the third day I shall be perfected.” Luke 13:32

“Though he were a Son, yet learned he obedience by the things which he suffered; And being made perfect, he became the author of eternal salvation unto all them that obey him.” Heb 5:8-9

Before we go on and discuss perfection it is important that we understand the word as it is used in the Bible. There are three basic Greek words that are translated as “perfect” or “perfection” in the King James Version. The first and most popular is TELEIOO and the corresponding TELEIOS. This word was used in the reader’s scripture and does not really mean perfection as we think of the word today but more literally means “to finish, accomplish, or complete.”

The second word is KATARTIZO. This word means to complete or finish, but in a different sense. TELEIOO has the implication of finishing a new work or effort one has taken on whereas KATARTIZO implies a restoration to something as it was in the past. Both words imply wholeness, but the first through a new task, the second through a restoration.

The third word is AKRIBELA and derivatives thereof. This is the closest Greek word to our modern word “perfect”. It means: “to do a thing precisely and exactly correct.” Paul used this word in reference to the way the Jews taught the law: “I am verily a man which am a Jew, born in Tarsus, a city in Cilicia, yet brought up in this city at the feet of Gamaliel, and taught according to the PERFECT (exact) manner of the law of the fathers, and was zealous toward God, as YE ALL ARE this day.” Acts 22:3

When the Bible believing people of today talk about Jesus being perfect they usually use the word in the same sense that AKRIBELA was used. That is they think that Jesus obeyed all the laws “exactly” . They think of his perfection in the sense that he never made one mistake, that he never broke one commandment and exactly obeyed every injunction from the Bible. He was beyond reproach.

Actually, AKRIBELA was never used in the Bible in association with Jesus. The ones who were seeking for perfection, exactness, or AKRIBELA were the ones he continually called “hypocrites”. The Pharisees, Saducees, the Doctors of the Law, Scribes, in other words, the basic religious people of the day were continually accusing Jesus of not being AKRIBELA or perfect enough in obeying the law.

The scripture says: “THE LAW MADE NOTHING PERFECT, but the bringing in of a better hope (Christ) did; by which we draw nigh unto God.” Heb 7:19

Orthodox Christians say that Jesus was perfect because he obeyed all the laws but the Bible says “The law made NOTHING perfect”?

Why do people worship Jesus and revere him as God because he exactly obeyed every law and scriptural injunction when the Bible says: “that NO MAN is justified by the law in the sight of God, it is evident: for, the just shall live by faith. And the law is NOT of faith: but, the man that doeth them shall live in them. Christ hath redeemed us from the curse of the law, being made a curse for us: for it is written, Cursed is every one that hangeth on a tree.” Gal 3:11-13

Here Paul boldly states that Jesus was not perfect (or AKRIBELA) because he broke the law by his very death. The Old Testament which Paul quoted stated that anyone who was hung on a tree (or cross) was “accursed of God”. (See Deut 21:23) Therefore Paul explains that if righteousness comes by the law then Jesus was cursed because he was crucified on a cross made from a tree.

Why do you suppose it was in the plan of God that Jesus violated the law of perfection (AKRIBELA) to the extent that he was to be “accursed of God” by his very death. After all, he permitted it to happen. Was it so we would look forward to something else besides a black and white interpretation for our salvation? If this is so, why do we put Jesus on a pedestal by saying he never broke a law? Why do we think of him as AKRIBELA (perfect) when the scriptures do not say this?

One of the main reasons that Jesus was rejected by the Jews is because he was not perfect or exacting enough for them in keeping the laws of God given through Moses. He did not have the black and white attitude of the typical pious person. He realized that there is a time and season for “every purpose under heaven” Eccl 3:1 He knew that no carnal law could be written that was correct in every circumstance and taught that on the principle of love “hang ALL THE LAW and the prophets.” Matt 22:37-40

Paul reinforced this and said: “For he that loveth another hath fulfilled the law.” Rom 13:8 He also taught us not to be concerned with “the letter (of the law), but the Spirit: for the letter killeth, but the Spirit giveth life.” Rom 3:6

In other words, if one follows the law of love, or the spirit, he may wind up breaking the letter of the law and the prophets. Almost everyone, for instance, would be forced to break the letter of the law if he or she lived under a ruthless dictatorship. If authorities came looking for one’s child to execute him what parent would not lie to some degree to save the child from unjust suffering? In this case a lie breaks the letter of the law, but fulfills the law of love. Exceptions as this can be found for every commandment as was well illustrated by Solomon when he said there was a time for every purpose under heaven.

It should be a great relief to us that Jesus was not perfect (AKRIBELA) in the keeping of the carnal law and that his perfection was in the fact that he was able to do the job expected of him by the Father. This is especially so because of a commandment men and women everywhere are given: “Be ye therefore perfect, even as your Father which is in heaven is perfect.” Matt 5:48

Jesus was intelligent enough to not give his disciples a commandment that they could not obey, or that he himself did not adhere to. Most people see this perfection of the Father as something entirely beyond our grasp, but Jesus was talking about something that is possible for both him and us. The word perfect here comes from TELEIOS, an adjective form of TELEIOO. We find that this scripture is right in the middle of the sermon on the mount and that it makes a lot of sense when we read it in its context with a more enlightened translation:

“Finish therefore what is expected of you, even as your Father which is in heaven accomplishes that which is expected of him.” This is a commandment we can live with and appreciate and is much more applicable than an injunction to be flawless as is the One God who holds the universe together and created all the millions of galaxies. That is like telling a worm to be like a man. That is impossible, but the worm does his job assigned to him by nature just as do the higher animals. In this way all living things are perfect as the Father is perfect if they follow the harmony of nature.

A reader says: “By the way, the more you give the “devil” credit (even for the bad stuff) the more “power” you give him.”

JJ: The principle you are talking about here is that “energy follows thought.” There is much more depth to this law than even seasoned students understand.

If we put our attention on the negative then energy will follow that thought and manifest “devils” in your life.

Does this mean that we are to suppress negativity and pretend it does not exist? No, this may produce even worse results.

The key is to keep ourselves grounded in the real world by mentally acknowledging the reality of evil, negativity, the Dark Brothers etc, yet at the same time focusing thought on the desired energy and outcome. You will thus keep the realization that there is evil out there that needs to be dealt with but at the same time not feed it any energy because your directed thought is on the positive.

It’s a little like driving a car along side a river bank. It is important that you realize the river is there so you do not drive into it and destroy yourself, but at the same time you have no fear because your mind is focused on the positive goal of staying on the road and on course. You therefore do not give any energy to the thought of driving in the river, but only on your next desirable destination.

With the correct attention on thought and energy you thus live in the world of duality, but master duality.

The Dark Brothers connection with us is a little like that of a Mafia boss. The average guy does not know who he is and the Mafia boss could care less about the average guy.

The Mafia guy does have an effect on the average guy, however, for his organization is selling drugs to kids and his abuse of the system causes the average guy to pay more taxes to keep everything under control.

On the other hand, if some average person steps forward and does something that interferes with mob business then he will have their attention and will have a fight on his hands. In this case mere positive thinking will not create any immediate solution any more than a person stepping into the ring with Mike Tyson can make Mike turn into a cream puff by sending him good vibes. When in the ring with an opponent even the man of peace must fight with all means necessary or suffer defeat by default.