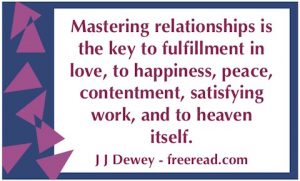 To accurately find your rising sign you have to have an astrology chart done. You have to know your time of birth within fifteen minutes or so. That’s one thing you do need your time of birth for. If you don’t find it, some astrologers can ask a series of questions and make an intelligent guess. It’s not 100% accurate. The trouble is with birth certificates is some birth certificates record the exact time and others don’t. Sometimes your parents will put it in your baby book. I was very careful about recording all my kids’ times of birth, but after I was divorced from my first wife she figured astrology was of the devil so she won’t even let me look at their baby books. I can’t do their charts. It’s is ironical since I was very careful about recording their exact times of birth. If you have it within 15 minutes, you can figure your rising sign fairly accurately.

JJ: The core principle of Virgo is service, a nurse. Tell us some things about Virgo, Cindy?

JJ: Yeah, service is kind of a key note for Virgo. Would you say service is the main Key word? (JJ: receives confirmation of this from Cindy.) OK, let’s use service as the main Key word for Virgo. When Artie met me she got a revelation saying that she was supposed to nurture me and that’s a form of service. So perhaps that’s fulfilling her rising sign, to be a nurturer. Every once in a while, she says things that aren’t nurturing (laughter) and let’s me have it, you know, once in awhile. But she’s a pretty good nurturer overall.

JJ: Really? Matter of fact, there was a site on the internet devoted to the number 11:11. I saw that when I first got on the internet when I was on AOL ages ago. Whoever started it apparently thought it was a very mystical number: 11:11. People on that particular discussion group saw 11:11 everywhere. It was kind of interesting to read their posts. Anybody else know their rising sign?

JJ: That’s a good question. I’ll answer it in a minute. OK, Peter over here is Sagittarius, with sun sign Pisces. That explains your handwriting a lot, because Pisces are very intense emotionally. That’s interesting. Sagittarius is a fire sign, it’s the symbol of the archer, and the archer is symbolizing, shooting the arrow and stretching yourself, stretching your vision with the arrow as it shoots into the future, shoots in the horizon. What this means is that you are supposed to learn to really maximize yourself and your abilities to stretch yourself to the limit so-to-speak.

In other words, to take your talents, whatever they are, your soul will push you to go beyond what you think you can do. Have you ever experienced that in your life – felt an impulse from within to really keep trying harder all the time? Can you feel that? You can? That’s good that you can feel that. When you feel that, it’s good that you follow it. “I can do this better, I can do this more successfully.” You’ll feel that impulse – follow it and you’ll be very successful. Anybody else know their rising sign?

Lorraine: that’s my exact opposite

JJ: Leo’s a fire sign. That’s just the opposite as far as far as earth goes and often opposites attract so that’s probably why you two are kind of buddies because you’re opposite energy and balance each other out. Do you kind of feel that about each other? Yea? So you’re Leo with Cancer rising? OK, so Leo is really an outgoing energy but the Cancer rising is one of the most internal energies. So he’s a natural extrovert that is learning the benefits of looking within. As a kid you were probably a really rambunctious kid, but as you get older and older, you’re turning more within. Do you kind of sense that? That’s kind of interesting. Quite often it happens the other way around.

Audience: I feel comfortable in the bar, around people, but I don’t mind being at home either.

JJ: See, cancer is the symbol of the crab. He’ll be in his shell and he’ll reach his feelers out and he’ll pull back in and likes to stay in his shell. Home and family and security have all been things you’ve learned. It didn’t come natural to you, you had to learn to appreciate it, the security of hard work, the security of home and security of establishing your own space where you can feel like you’re not affected by everything that’s going on out there. Does that make sense to you, can you identify with that?

Audience: How about Leo Moon? What does that mean?

You’ve learned a lot from things that don’t work? Audience: (Laughter) It’s interesting that people are agreeing with this assessment where DK explains the rising sign: I can really identify with my own. When I started exploring esoteric astrlogy, I found that the most accurate pieces of data for reading astrology are the few little tidbits that DK did throw at us. I find what he did say is a lot more accurate than other things I’ve read in astrology books.

When you explain this to almost anyone and tell them what they’re supposed to learn, especially past middle age, they can look back, they say, “Yeah, that is really correct.” All of you might want to get your astrology charts out and dust them off or get new ones. Look at your rising sign and find out what it means then look at this as what you are supposed to learn. You must learn this the lesson of the rising sign if you are going to accomplish the mission your soul has for you. It’s important if you haven’t learned it all. You need to continue working on it. When you learned all the things that don’t work, then you can start acomplishing things that do work, OK?

JJ: Maybe so. He kind of worked a lot by trial and error in making his inventions. Astrology is a science of relationships. We ourselves are like little miniature planets. Even the little atoms science examines are similar to little tiny planets. They have electrons revolving around them, as the sun has the planets revolving around it. What do we have revolving around us?

JJ: If we can see the aura, we see we have it revolving around us. I’ve seen my own outer aura in rotation. Now Joel’s is revolving around. As I stand next to him, if you could see it, our auras are intertwined Can you feel that Joel?

Like I say, if Andy is over in Nigeria, on the soul levels we can influence each other. Each of us has an influence on each other. Basically, when we learn our differences and how to harmonize our differences, we are applying the science of astrology in our own life. In a regular astrology chart, you have several influences, some very positive, some very negative. A positive one is what they call a trine. Ok, Cindy, what kind of energy is in a trine?

JJ: How many degrees in a trine?

JJ: Right. Then we have a shorter angle which is a square. What’s a square?

JJ: A trine is 120 degrees and a square is 90 degrees. Then you have the opposition which is 180 degrees and you have conjunctions where two planets are converging. In our relationships, we have similar things happen to us. Have you ever met anybody right off the bat that you feel negative about, right from the beginning? That’s like a square in a astrology. You have a friction between you and the other guy. You don’t like the way he dresses, you don’t like the way he looks, and you don’t like the car he drives. That’s similar to the influence of the square.

On the other hand, if you meet somebody to whom you’re really attracted, it’s like a trine. The energy has nothing stopping it from communicating from one person to the other, it flows freely.

There there are conjunctions. I guess you could say, if you went on a date and you got along together, that would be like a conjunction.

In our own relationships, we apply the principles of astrology. We are like miniature orbs and planets converging upon one another. To work yourself through the squares of life, that is the difficulty. When you first look at a chart, for instance, you may not see anything difficult in two relationships until you look really closely and then you start to see things the couple may have to work through.

This is the way it is when you meet somebody or begin a relationship with somebody. At first, you’re not looking closely and everything’s cool and you feel the soul, but when you get to know each other, all of a sudden there are things you have to work through. One of the exercises we have done in the past Gatherings is to teach the principle of looking on each other’s soul. Since it’s near dinner, we are going to end this session by doing that. We’ll look on each other’s souls. Instead of having squares, we’ll be having trines and establish a connection with each other.

(JJ calls his wife Artie to the stage) This is the way to do it. You look the other person in the eye and you say, “Artie, I’m looking upon your soul. I love you with the pure love of Christ.” Now say that back to me.

Artie: “Joseph, I am looking upon your soul and I love you with the pure love of Christ.”

Audience: Participates in the exercise.

Later we ended with a past life regression.

Love thy neighbor as yourself, but choose your neighborhood. Louise Beal