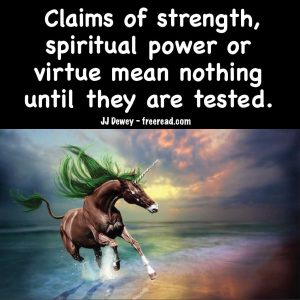 A reader wanted some clarification concerning how sex plays out in the Molecular Relationship.

JJ: The regular marriage or covenant relationship between two people may or may not be a part of a molecule. Physical sex is not an ingredient that makes the molecule, but those who have a committed relationship will of course pursue their normal intimacies.

Many of the male-female partners within the molecules will be “working relationships” as I explained in the book. These will be partnerships which have no romantic inclinations, but are paired for the purpose of balancing energies and sustaining group soul contact.

For instance, it will sometimes be the case that an applicant will want to be in a molecule, but have a spouse who has no interest in the work. If he or she has no interest in participating then obviously he or she can not join in the group work in reaching the zero point where the magical power of the soul is manifest. In this case the person would have a working partner to create the opposing polarity necessary for balance. This would, of course be non sexual to avoid interfering with the committed relationship which already exists.

In addition to this many single people who have not found their life’s partner will have a molecular working partner. Unless the couple have a romantic attraction and form a committed union sex should be no part of the relationship, just as sex us not a part of your day job when you work with a person of the opposite sex.

Sex is a natural function like eating and both molecular and non molecular people will do both, but neither will a special ingredient in the forming of molecules, save as side items of sustaining normal living conditions.

The intimate lives of those joining a molecule should not change.

Question: Was Jesus’ power to do miracles dependent on the molecule he created?

The power Jesus had to do miracles did not depend on the molecule he created that was under him, but it was related to the molecule which he was in which was on the other side of the veil. The angel who appeared to him in the garden was a member of his direct molecule. Without the appearance of this molecular partner Jesus would have died in the garden.

On the other hand, the power of the Apostles to duplicate the powers manifested by Jesus was dependent on their own molecular relationship.

Reader Comment: I always assumed that Jesus was able to do what he did because of his special relationship with the indwelling Christ.

JJ: There is of course the Christ principle within, but in the case of Jesus there was another entity who was the earthly representative of this principle, the one we all “the Christ.”

The Christ was the molecular link for Jesus. To create a molecule on the earth which is linked by an eternal chain of hierarchy, there first has to be a molecular link. This was created at the baptism when the Christ descended upon Jesus and dwelt in him.

The Christ was a member of a molecule, but Jesus was merely linked as were the apostles after the twelve were organized creating an exoteric molecule.

Question: Is there any scriptural or other evidence (eg DK) to show that it was because he was part of a molecule?

JJ: The molecular relationship is only hinted at in the Bible and writings of DK, but there are many references which supply evidence which I have cited in my book. The baptism of Jesus is a good one and also the fifteenth chapter of John.

Jesus said: “Abide in me, and I in you. As the branch cannot bear fruit of itself, except it abide in the vine; no more can ye, except ye abide in me. I am the vine, ye are the branches: He that abideth in me, and I in him, the same bringeth forth much fruit: for without me ye can do nothing. If a man abide not in me, he is cast forth as a branch, and is withered; and men gather them, and cast them into the fire, and they are burned.” John 15:4-6

The vine is the molecular link from which the life of the molecular relationship flows. Without this link “ye can do nothing,” and we are as severed vines which have no spiritual life.

Notice that Jesus says that those under him “abideth in me” yet he himself abides “in him” or his father who is his molecular link.

This all ties in with DK’s teachings of the group life being so essential to the fifth kingdom in nature.

Question: And how would this tie in with his membership of an ashram (or were they not as structured as they are now, post Christ?).

JJ: There are various grades of ashrams. Some are molecular and some are not. The Christ at that time was a member of one that was molecular. His ashram at that time was of a different constitution than it is today, but the principle that governs it remains the same.

Question: Further, if, for example, an angel appeared to one of us, would it mean that that angel and person in question were members of the same subjective molecule?

JJ: The word angel merely means “messenger.” Some messengers are molecular while others are not. The angel who appeared to Jesus (and the Christ) in the garden had a molecular association with the Christ and was this the logical one to ““strengthen him.”

Question: If so, then does that mean that eventually people will be members of more than one molecule eg subjective and objective molecules?

If you go to page 48 In Initiation, Human and Solar and look at the diagram of the hierarchy you will see various lines that demonstrate the lines of force which manifest between various molecular members.

Now if you visualize the creation of numerous molecules and imagine the lines of force working between them, the lines would be similar, but not exact.

“It will be remembered that the first great outpouring from the Logos vivified universal substance and caused every atom of matter within the “ring-pass-not” of His system to vibrate in seven different measures of vibration. The second outpouring caused molecular combinations, thus forming the six subplanes below the atomic on each plane, and produced form.” DK Esoteric Psychology Vol 1