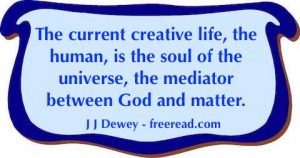 Audience: If I take it to extreme I can’t ask God anything?

JJ: All parts of you are linked back to God. The answers you get when you pray to God come from different parts of yourself which are eventually linked up to God, to the one life. You are a part of the one life!. You get the answers from within yourself almost all the time. Your subconscious mind produces a lot of the answers. If the subconscious mind doesn’t have it you can go to the higher mind linked to the Soul. The step above this is direct soul contact. Every once in awhile we may get an answer from a master, or someone from the spirit world, who is disincarnate. That’s really an answer from God because they are a part of God. We’re all a part of Him.

JJ: They see God as a person up on a throne to whom you pray and He comes directly down. It’s not directly. All of our answers from God are indirect from representatives of God. You have to look at the idea that God is manifesting everywhere but His consciousness is manifesting in people, in us, in you and me.

In the beginning God made man in His own image, in His own likeness. He reflected Himself and put attention on His soul in the universe. That’s a profound seed thought to contemplate. It will give you an idea of the destiny of humanity. We are the consciousness of God in the universe. We are His soul, His creators.

Audience: Is this DK’s teaching or from where does it come?

JJ: DK doesn’t explain that fully. After I discovered it myself I found that he hints at it. He never elaborated on it. It’s not written anywhere. This is a teaching you won’t find anywhere but right here as far as I know. I think I’ve written it on the Keys. I can’t remember everything I’ve written about in the archives. It’s a profound thought to think about and it’s a tremendous principle. As above, so below. Where is the soul of the universe? The soul of the universe is humanity.

Audience: You touch upon that in the book too.

JJ: Matter of fact, in a future book, maybe the next one, I’m going to write about the universe from its smallest parts to its greatest. Joe, in the book, is going to be given a grand tour from the smallest particle to the greatest particle to see how everything is put together. It’ll probably cover several chapters and be one of the more interesting things in the series.

Audience: So, when we evolve our purpose then is to put our attention on humanity because it’ll be our souls eventually?

When all of creation is wrapped up we’ll go back to God, so to speak, but it will be different. We’ll be on a new turn of the spiral. We won’t be going back home and relaxing to things that were the same as it used to be. Every turn of the spiral is new and different. It’s like the eighth initiation we talked about, the initiation of transition. We eventually all have to go through the initiation of transition where we accept the fact that the great age has passed. As we make our journey back home there is a tremendous transition because we’re going to an entirely new sphere of activity that’s different from anything we’ve ever encountered. This is one of the things we need to adjust as we end our evolution in this sphere.

There is tremendous change always taking place: tremendous changes in our consciousness. The true going back home…when you’re going back home for a short time it’s comforting to go back to your base, so to speak. In a way we can still do that and this is returning back home right now. When you go to the soul within, you go to your source, and you have a feeling of returning home. But that’s not in the far future, that’s now. The home of the far future will be different than the past. It will be on a new turn of the spiral. We can compare it to playing middle C, then you play a higher C. They’re the same but different. When we return home it will be the same but different, a different note, a different vibration and it’s still a familiar vibration. It’s like the higher C is familiar and a similar vibration to middle C yet different. Things will always be different and always be evolving.