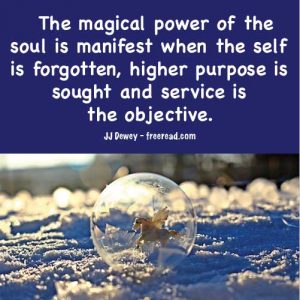 JJ: We’re going to have the healing session now. Before I do that, though, I’m going to present to you a mystery. Whoever solves it first gets a free back pack.

The Eighth rule of White Magic goes like this: “The Agnisuryans respond to the sound. The waters ebb and flow. Let the magician guard himself from drowning at the point where land and water meet. The midway spot which is neither dry nor wet must provide the standing place whereon his feet are set. When water, land and air meet there is the place for magic to be wrought.”

JJ: Sometimes the horizon is just land, too. The seashore is that way; land, air and water meet there. There is a little thing you might have learned in high school science that was the place where land, water and air met. We’re going to show you this, where magic happens, something that seems to be against all laws.

JJ: Then where’s the magic?

Audience: Change of temperature? Is there magic in dew?

JJ: Yeah, there’s quite a bit of magic there. What’s magical about it?

Audience: It’s life. Dew gives life to everything. The magic is what draws the water out of the air? The magic is that it changes?

JJ: Where is the point where land, air and water meet?

Audience: Point zero? You want a physical location on the earth?

Audience: The nucleus of an atom?

JJ: That’s even smaller than a water molecule.

Audience: What about the dirt, the earth?

JJ: I’m going to give you additional hints as the night goes on and in the latter part of the evening I’m going to show you where land, water and air meet.

JJ: A flame is not wet. The closest thing I can give you where land, air and water meet is at the seashore. The water is coming in, the land is here and the air is up there and the point where they meet is “there” (pointing to drawing on the blackboard.) There doesn’t seem to be anything magical, yet there is magic that can occur there at this point. We’re going to show you something magical that can occur at that point.

Audience: What about snow?

JJ: Snow is frozen water. I’m talking about regular liquid water. We’re going to demonstrate where it meets on an actual physical plane.

Audience: The physical, emotional and mental?

JJ: Water is the astral symbol for the emotional. The place where water, land and air meet is in the body and that is the door to the soul and when the door opens the magic occurs. This is where the white magician fits in. The white magician must avoid drowning in the spot where land, water and air meet. What do you suppose that means?

Audience: Don’t be overcome by emotions?

JJ: Yes. One of the finest examples I come up with is Joseph Smith. He was given a revelation to go to the Rocky Mountains to save his life and then as he was in the process of leaving he got this letter from his wife that said, “All your friends are calling you a coward for leaving. They want you to come back and face the music with the state, even though you may get killed.” He read that letter and he told his brother, “If we go back, we’ll be butchered.

His brother responded, “We need to go back. Everybody will think we are cowards if we don’t go back.” He gave in and went back and he was killed. In other words, he was drowned at the point where land, water and air met. He was flooded by the emotions. The emotional response flooded him to the degree that he didn’t do what he was told to do. He was told to go west and to save his life and he didn’t do that. He was drowned by the emotional response created when everyone wanted him to stay. He’d been in court about 50 times and he’d been exonerated each time and the followers thought the same thing would happen this time. He knew it wouldn’t happen. Yet, he let the emotional response of everybody around him, especially his brother, who said, “I’m going back even if you’re not going back.” How would that make the poor guy look? If his brother went back he thought he would look like a coward for following his inner voice.

Jesus was faced with similar condition. He told his disciples, “I will be crucified and put to death by the Jews.” Peter said, “Far be this from happening to you Lord. I will prevent this from happening to you, Lord.” Jesus said, “Get behind me Satan.” He called Peter Satan. “You’re trying to prevent me from doing what I came here to do.” Peter gave him the temptation of drowning at the place where land, air and water met. Because of the love the Master had for his disciples, the Master was tempted to not go, even though his mission was difficult. Jesus did go ahead and finish the job despite the emotions of his disciples who didn’t want him to go ahead and do it. He followed the inner voice.

The windows to the soul open only where the land and waters meet, if the magician avoids being drowned by the waters. Where does it say the standing point is supposed to be?

Audience: In the middle?

JJ: At the point which is neither wet nor dry, where the land, waters and air meet. Air is the symbol of the mind. People are teaching the illusionary concept that we are supposed to be mind-less. This is bandied about many New-Agers. No, we are supposed to be mind-ful. The mind, the emotions, the physical body all have their roles to play. We shouldn’t be like Spock and do away with the emotions. We shouldn’t be like robots and think and not act. We have to be like Captain Kirk and use the mind and emotions.

We have to use everything to be the complete person. Where land, the physical; mind and the feeling all come into play, the door to the soul is where they all touch. And when the door to the soul opens, then the energy of the spirit can come in. This has to happen to produce healing.

Let me quote excerpts from the rules of healing:

“Perfection calls imperfection to the surface. Good drives evil from the form of man in time and space… The art of the healer consists in releasing the form so the energy can flow through the aggregate of organisms which constitute a particular form.” Esoteric Healing, Pages 5 & 295

The energy of the soul has to be released so it can pour down. Good drives evil from the form of man in time and space.

What happens is perfection brings imperfection to the surface. The Tibetan said this is the principle that Jesus used in his healing services. He looked at a person and he saw the soul. He saw the Son of God in that person. Because he saw perfection and brought imperfection to the surface, then the good drives evil from the form of man in time and space. That’s the principle behind which The Christ performed his healing. He saw the perfection in the person. No matter how much imperfection is in the personality, he did not look on that, he looked on the soul. By looking on the soul, the Son of God manifests in that person. What did he say after each healing?

Audience: Go and sin no more.

JJ: Did he take credit for it? No. He said, “Your faith has made you whole.”

In other words, the Son of God in Him came forward in the one to be healed and that perfection arose because Jesus saw it. This often happens in romantic relationships. When you fall in love you are the most perfect person to each other that ever walked the earth. You feel like you could walk on water. Everybody here has probably fallen in love once or twice. You know how it feels to have somebody look at you as a wonderful person. It’s a wonderful feeling. When the soul comes forth within you, you start to feel wonderful all right. This may happen to individuals only once or twice in a lifetime. As the person becomes the disciple, he manifests this on a regular basis. He sees the Son of God in everyone.

As a disciple begins to evolve he sees the perfection in everybody around him. My first marriage was quite a difficult one. I got a lot of practice in awkward circumstances. When I had a lot of friction with my first wife, I would practice seeing the Son of God in her. It was a really good learning experience for me to do that. Of course, I am married to the perfect woman now, so it’s real easy.

What we’re going to do next is call forth the soul and energize. Instead of just picking on people who need help, we’re going to do it to everybody. Margaret fell and hit her head so hopefully this will energize her.