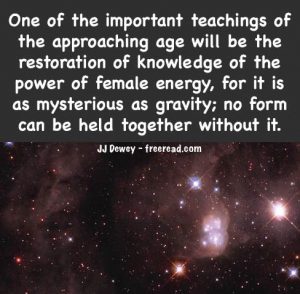 As we begin to examine the second Ray of Love/Wisdom the first thing to look at is the principle differentiation from Ray One, the Ray of Power.

Mathematically Ray One is an odd number and Two is even. Esoterically the odd numbers represent male energy and the even, female. I’m sure the females in the group will be pleased that we are associating the word “odd” with the male energy, yet perhaps feel a little shortchanged that two out of three of the aspects (Rays 1, 2, & 3) are associated with male energy.

A future universe will be built upon a foundation of eight rays where there will be an equal assortment of odd and even, but in this one there seems to be a dominance of the male

From one point of view the even number is a creation due to the interplay between two odd. For instance Ray Two is the midway point of interplay between Rays One and Three. No matter how far you count, when you end on an odd number, you will have a surplus of one number that is odd with all even numbers between the two odd.

Does this mean that there is not a perfect balance of male and female energy in the Universe?

Yes, in the fact that there is always perfect balance when all things seen and unseen are added up. But the answer is no in the fact that creation of all form cannot take place in a state of perfect balance. Whenever we see the appearance of any form we are witnessing a creation made from an energy interplay which is slightly lopsided. If energy were not out of balance the form would immediately go back to spirit and disappear from view.

Even though seven is the number of creation, twelve is the number of ultimate perfection because it divides into an equality of six even and six odd or four Trinities making the foursquare building blocks of totality.

The Seventh Ray is called the Synthetic Ray, however, and because it is synthetic its male charge is very slight and in relation to Ray one it is female.

Overall the out-of-balance energy which creates this universe is so slight that it would seem to be mathematically insignificant. Nevertheless, it is there and without this lack of balance we would not exist as we are now, nor would we all possess the drive toward evolution, for the Will-to-Evolve comes from an inner drive to seek greater balance.

The Trinity is thus composed of Rays One, Two and Three. This is 66% male energy which seems like more than a slight imbalance. Where is the balance to be found?

The answer can be found in this symbology. The Rays One and Three represent pillars and Ray Two represents a door. The door and that which lies behind the door create two which produces an esoteric fourth of creation and the possibility of ultimate balance.

That which lies behind the door is a great mystery and is one reason that the female often has the word “mystique” associated with her.

How are Wisdom and Understanding related to Love? Can real spiritual Love become manifest without them?

One of my favorite quotes is from Leonardo DaVinci:

“Before something can be loved, it must first be understood.”

The female seems to understand this principle more than the male and is constantly seeking for males to make greater effort to understand her and the relationship.

To his credit the advanced male does seek to be understood in the world of ideas.

Even though understanding is important, love could not manifest by the use of this aspect (understanding) alone. A hurtful person may understand you, but negate that understanding with selfish motive. When wisdom is added then wholeness comes before the vision and motive is lifted above the isolated individual self.

One of the problems with the comprehension of this second Ray of Love/Wisdom is that many students equate this energy with the touchy-feely solar plexus self-satisfying emotion. In fact many new age teachers go so far as to tell us we must “lose our minds,” “become mindless,” “leave the mind behind,” or some such thing before they can experience love.

But notice that the second Ray is not just called the Ray of Love, but has the dual name of Love/Wisdom.

What do you think? Is mindlessness the way to go to find or manifest Love? Why does this aspect (related to the Christ of the Trinity) have the dual name of Love/Wisdom?

Question: Is polyamorousness something disciples should embrace?

“Sex is then seen to be in truth only the relation of the lower nature to the higher Self; it is then lifted up into the light of day in order that man may reach complete union with divinity. Man discovers that sex (which has hitherto been a purely physical function, carried on sometimes under the impulse of love) is elevated into its rightful plane as the divine marriage, carried out and consummated upon the levels of soul awareness. It is this great truth which lies beyond the sordid story of sex expression, of sex magic and the distortions of modern Tantric magic. Humanity has stepped down the symbolism and in its thoughts debased sex to an animal function and failed to lift it up into the realm of symbolic mystery. Men have sought through physical expression to produce the inner fusion and harmony which they crave and this cannot be done. Sex is but the symbol of an inner duality which must be itself transcended and wrought into a unity. It is not transcended by physical means or rituals. It is a transcendence in consciousness.” Esoteric Astrology, Page 385

The end purpose of sex is unity and all sex (as well as other energies) must be dedicated toward union and not separateness. Most polyamorous relationships are merely an excuse to indulge the lower nature.

I have written on this in my book The Molecular Relationship.