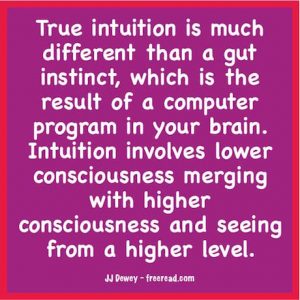 Assignment: Contemplate the difference between the mental and intuitional person and tell us what they are.

The group gave some great comments on this. Now I’ll add a few thoughts.

First, we need to realize that the word “intuition,” as used by DK, is somewhat different than the common meaning.

What then is the intuition?

Intuition is a higher octave of the emotional self.

Intuition opens the window of the soul and communicates with the world above the mind or higher – the formless worlds. It receives in the language of the soul. And what is that? It is the language of principles. Perhaps DK describes it best when he uses the words “flashing forth” as descriptive of the intuition at work.

The intuitive will put all known facts together and contemplate. His consciousness will penetrate higher worlds through the soul and a principle will come into his mind. When this happens a “flashing forth” is realized and the light of the revealed principle is shined upon all that was previously obscure.

One can see how the emotionally polarized person makes consistent decisions based on feeling and the mental by using the mind but it is more difficult to understand the intuitive.

Because many decisions do not require intuitive thought. Some decisions may benefit from the intuition and others may not.

Question: Since decision is the key to polarization but not all decisions can be based on intuition, then how does the intuition govern decision-making in the life of the intuitive?

Can you give an example of a time that intuition helped you make a decision?

“But I can only show you the door. You’re the one that has to walk through it.” Morpheus – The Matrix

Question: Intuition is not a gut feeling. Please define gut feeling. Is this animal instinct or psychism or what??

Gut feelings come from several sources. The first is the instinctual nature. Instinct came into play in the first part of our evolution as human beings as a carry-over from the animal kingdom. Instinct is very closely associated with survival and is used by primitive humans, as well as animals, to escape danger, to find food and water and establish customs for tribal unity.

As each of us progressed from instinctual polarization to the emotional, instinctive powers became dormant, or went below the threshold of consciousness. This does not mean we have lost this ability, but it does mean that we put it on the shelf so we have greater power of attention to concentrate on our next level of progression. Instead of being lost, it does mean that it lies latent within each one of us and may be recovered by the soul to aid us in various situations.

Each of us may, in times of tension within our lives, experience this instinct that is often called a “gut feeling.” It is not infallible by any means, as this ability is associated with an ancient time and circumstance for most of us, but it is accurate enough that we should pay attention to it and compare it with any higher feelings and reasoning we have.

Many who receive an instinct or gut feeling misname it intuition, but, esoterically, instinct and intuition are very different from each other.

Question: What then is the intuition? Intuition is a higher octave of the emotional self. ” What does this mean?

We have three vehicles of expression in the words of form. They are the physical/etheric, the astral/emotional and the mental/thought. Then there are four higher beyond form.

I often compare each of these worlds to a musical octave. In music when you move up an octave you play the same note again, but it is not the same. It has a similar resonance, but a higher vibration. Each of the worlds has seven sublevels corresponding to the seven major musical notes or the seven colors of the rainbows – or the seven creative rays.

As we progress through the three worlds we move up an octave from the instinct of the etheric/physical to psychic ability of the emotional to the logic of the mind, and finally to the intuition of the buddhic plane.

Just as Middle C does not become useless when you move up the scale, even so do all the abilities have their purpose and use.

Question: Please define and elucidate on language of the soul.

Here are some quotes from my previous writings.

I believe that someone mentioned that the language of the Soul deals with principles. This is a good way to see it.

Think on this: It takes a thousand facts to reveal one principle, but one principle can reveal thousands of facts. If we see this as being true then we can understand that when the soul speaks to us that there will be times when a whole book can be communicated almost instantly.

From the beginning of this list my main goal has been to lead some of you into the true world of the soul so many can learn to verify information through the soul by using correct principles. A great leap forward in this process is to not be deceived by a multitude of facts and data, but to learn that the Spirit within can and does verify principles and principles behind various packages of knowledge.

Let us use an example of a principle taught in the Immortal book. “I AM BECOMING that which I DECIDE to BECOME.

When many of you contrasted this principle with the idea of a static, never-changing condition for all eternity, the idea of eternal progression just struck a chord within your soul. The reason this principle felt so good is because principles are dealing with the language of the soul, and from and through the soul we can receive a true communication. The good part is that as we progress from confirmation to confirmation our sensitivity to this communication becomes more and more reliable until the seeker can bring down principles from on high for himself and others.

But as far as regular knowledge that is available in the world through books and teachers are concerned, the best way to acquire it is from without. A good teacher is invaluable and so is a good book written by a teacher.

All souls are one and when we all speak the language of the soul together we will see as one body. But even those who do their best to retain soul contact can question and disagree because of incomplete communications.

If my soul verifies a truth and yours does too then wee see eye to eye with no decree from outside of ourselves. This is the way it should be. When we arrive at this answer a light will be thrown on the souls of many and they will see the truth of the principle. Remember the language of the soul is principles. To the soul a principle is like a word is to us.

Question: Are you suggesting only principles are intuited, or did you simply not list all other types of info.

It may be misleading to say only principles are intuited. It would be more accurate to say that all intuition involves the use of principles in some way. Since principles are the language of the soul then this language must be involved in some way if the higher communications is to be brought down to the physical brain.

The beginning of intuition is in the in the use of ideas. Every idea does not present a principle in its fullness, but every good idea touches upon a principle and makes use of it.

Edison, for example, received the idea of the light bulb through intuition. The idea itself was not a single principle, but its creation involved the use of a number of principles. His mind this went beyond the words of form to bring down the practical idea of a new form.

“Sooner or later you’re going to realize, just as I did, there’s a difference between knowing the path…and walking it.” Morpheus – the Matrix