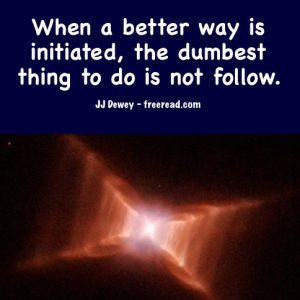 We have been discussing the deﬁnition of the initiate from a different angle than that which has been taught by many teachers in the past. Generally initiation has been presented as some type of learning and testing the student goes through until he reaches a certain state of knowledge or performance standard. When he then reaches a certain level he is accepted or “initiated” into the group or organization.

From the viewpoint of the Brotherhood of Light, the initiate is expected to do more than just learn a few rules and simply follow them. He or she is expected to initiate through his own initiative as a demonstration of expansion of his ring-pass-not or consciousness. Therefore, a new (yet old) meaning is given to the term which shall gain new meaning as we enter the Age of Aquarius:

The ultimate test of the initiate is to look into his life and see if he has initiated or assisted in the initiation of anything.

Sometimes an accomplishment is largely attributed to one initiate (like Edison inventing the light bulb) and sometimes a group of initiates are involved as in the case of a number of intelligent people involved in the founding of the United States. But the rule is: If a person makes some claim to be an initiate he must be involved in initiating something larger than self-interest and something larger than the parameters of his current job description.

If you meet a teacher who claims to be the greatest thing since Cornﬂakes just ask him what he has initiated. He, of course, plans on single-handedly inaugurating the Aquarian Age, but saying such means very little with no accomplishments to show.

Now let us brieﬂy review the names of possible initiates that the group has put forward.

First music: I think we can all agree that the Beatles were the most powerful initiating musical group of all time. They not only initiated a change in music and the group concept in bands, but they initiated a change in hairstyle, dress and even introduced meditation to the Western world. They were also a strong force in initiating the peace movement in the Sixties.

Did you notice though that after the death of John Lennon that none of the surviving Beatles have initiated anything of signiﬁcance? This is a testimony to the fact that Lennon was probably the strongest initiating force within the group.

Elvis and Sinatra were two other initiates in the business. Whoever initiated rap (for better or worse) would also have been an initiate. I am not sure who that would be though.

A reader mentioned the hippies initiating the peace movement, health foods, drugs, colorful dress… This would be an example of a group of initiates. During that period it was difﬁcult to tell which individuals were responsible for the dramatic change that was happening.

For teachers H. P. Blavatsky was mentioned. Yes, she initiated the Theosophical Society.

Sai Baba – I’m not sure about him. Did he initiate anything new?

The Dalai Lama – I’m not familiar with him doing any more than his expected job.

Mother Teresa – Yes. She did initiate a movement to help the poor in India.

Alice A. Bailey assisted in initiating a new set of teachings for the new age and is another good one.

The founder(s) of any worldwide religious, philosophical or new age movement is an initiate of a certain degree.

Even though Spielberg is the most successful, Lucas was the most powerful initiate. He introduced esoteric principles in a way that permeated the general consciousness of humanity and did much to prepare the current generation for Aquarian teachings. He introduced the “Force” which is a symbol of the universal presence of God. He introduced the concept of the Masters in a new way by presenting the idea of a Jedi master such as Yoda. He also introduced the concept of obtaining power by tuning into the power within. These ideas may seem simple to students of metaphysics, but it takes a powerful initiate to introduce them in an acceptable way to common humanity.

Then there is Gene Roddenberry, the creator of Star Trek who initiated on a similar level to Lucas.

Bill Gates was mentioned who certainly initiated change. A greater initiate in this area was Steve Jobs. Jobs was the ﬁrst to actually introduce the PC in a marketable fashion. Also, almost every concept in Windows 95 and 98 was incorporated into the early Macs. Jobs initiated, Gates carried the ball.

For scientiﬁc initiates the group mentioned Tesla, Einstein and Hawking. I agree and the reason should be obvious. Hawking, who I believe to be a reincarnation of Galileo, has also initiated greater respect for people with handicaps. The reason for his illness is traced back to guilt caused by Galileo’s denial of his discoveries because of threats from the church in that dark period.

For political initiates Netanyahu of Israel was put forward. To some degree he may be.

Robert Dole – not a signiﬁcant initiator, but has done some things.

Nixon -deﬁnitely initiated open relations with China which has had a powerful effect.

Jimmy Carter – Was going to make public information on UFO’s but never did. That would have been a mark of an initiate. He did initiate a peace accord at Camp David for the Middle East. Tried to free the hostages, but failed so that wouldn’t count. Carter may just be the ﬁrst to initiate a useful life for an ex President. This may be his greatest accomplishment.

Ken Starr – Starr really didn’t initiate much. He was given a job to do and he carried it out. Doing a job assigned to you is not initiating unless you go beyond your job description in a way that creates significant change. Starr was accused of doing this, but overall he was a pretty standard prosecutor. Starr’s tactics are pretty universally used by prosecutors everywhere.

Martin Luther King initiated a whole new era for blacks. He was a strong initiate for civil rights and is quoted by all races.

Bill Clinton. Attempted to initiate health care reform, but failed. He did initiate some trade reform. Many of the things he claims credit for were initiated by someone else. He basically tries to follow the polls whereas the initiate follows inspiration from within. On the negative side he has caused changes that many people feel have hurt the country. Perhaps the worst is the idea that everybody lies and that a certain amount of lying is OK. This is a very detrimental concept. .

This brings up a good question to leave you with. Should we always tell the truth? Aren’t there times that it is best to lie? If so, when?