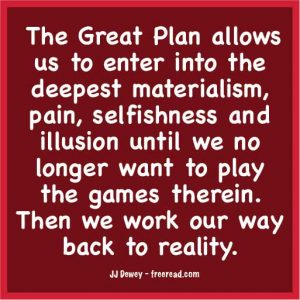 Question: Are we talking initiates or initiation?

We have been talking about initiates, not the initiation process, but they are interlinked.

Comment: I am assuming that one who is a second degree initiate has undergone the rod of initiation and has the requisite occult knowledge and abilities (as per Bailey’s definition.)

A person can attain the third degree and sometimes even the fourth without ever acquiring any standard occult knowledge in a life. He will have an inward esoteric understanding, but it is possible that he has not yet studied much outside of some standard religion. His mission may have little to do with spiritual knowledge as most understand it.

As far as the initiation ceremony goes this is often done shortly after death or during sleeping hours and the initiate may have no memory of its occurrence.

Question: Wouldn’t a second degree initiate be a master within two of the three worlds of form.

I think the word “master” here is misleading. A second degree initiate may not be much of an athlete, for example, because his mission requires that his attention be placed in other areas.

A good word to describe it is “control.” In the first degree he attains reasonable control over the pull of the physical so the downward pull of matter and form will not be able to direct his attention away from a positive work he is seeking to accomplish.

Bill Clinton is a good example of lack of control. He had lots of brain intelligence, but let the pull of matter in the form of a sex urge out of control prevent him from serving as he could have done. It is possible he achieved initiation in a past life and slipped backwards in physical control in this one.

A second degree initiate has control over his emotions so he will not express himself in ways that he may regret.

This does not mean that he will not get emotional or angry at times, but it does mean that he can control the release of his emotions so they will be relatively harmless. When the second degree initiate looks back on how his emotions are released he will have no regrets.

For instance, he may feel angry to the extent that his emotional self wants to hit someone. He will not bottle up his emotions, but, instead of hitting him, he will communicate his feelings some other way with as little disturbance as possible.

He may feel like knocking a door down, but then think to himself, this is silly because this door would cost a lot to replace. But I need to release the emotion so I’ll give the door a kick, but not hard enough to do damage.

He then kicks the door, maybe a couple times, and has no regrets because the whole experience was under his control and no harm was done.

You’ll find that most of the initiates of the world are very passionate, but have learned to control their passions to their satisfaction and the satisfaction of their souls.

Question: doesn’t a second degree initiate have continuity of consciousness?

When DK talks about a person moving consciousness between the physical and astral he’s talking about what is referred to in today’s language as emotional intelligence.

Research has shown that many very successful innovators did not do well in school, but have an emotional intelligence which gives them power to accomplish much more than memory training of the brain.

This is what is meant by moving in and out of the astral.

Comment: It seems that Bush, Putin, and Blair fall short of the third initiation.

I see nothing that would indicate that Bush, Putin or Blair fall short of the second degree. They are all men of strong emotional intelligence, but I do not see any of them as passing the third degree.

Concerning Bush, for instance, Bob Woodward of Watergate fame, and not too friendly to past Republicans, like Nixon, spent several moths with Bush in writing a book about him and came away liking him very much. Many Democrats who thought he was going to do a Watergate special on him were disappointed at how he talked about Bush’s influence on people once they were in his presence. He pointed out that he had a charm that few could resist when spending some time with him. This is often the power a second degree initiate has on those who could otherwise have been his enemies.

Comment: I would think that Margaret Thatcher, Gorbachev and Nelson Mandela could be second degree initiates.

I would also agree that these three are initiates. You cite flaws with Bush, Putin and Blair, but one could also find flaws in these three. Many initiates have visible flaws on the personality level.

Mrs. Thatcher initiated an advance for women by becoming the most powerful female in the world and doing the job as good or better than any man of her era.

You criticize Bush for dividing allies, but Mrs. Thatcher did this also in the Falkland Island War. Sometimes you have to stand alone to do the right thing and this she did, even without the support of Reagan.

It’s a good thing that England stood alone against Hitler, even though many in America just wanted to appease him and have “peace.”

Having people turn against you is not a sign that you are doing the wrong thing. If you do the right thing you will often encounter high resistance.

Some seem to think that if a person makes a few mistakes he cannot be an initiate. This is not the case. Even the Masters make mistakes.

Comment: I thought all initiations from the third upwards were always taken consciously ie a person knew he or she had taken an initiation.

Movement into the consciousness of the first two initiations is gradual and the initiate will not be aware of the exact moment that he has arrived in the eyes of the Hierarchy and usually does not even know what an initiation is.

We must remember that the initiations as described by DK are merely a hierarchical recognition of what has already been achieved.

The third and fourth is different because the disciple will definitely realize he is going through a unique experience as he crosses the threshold. The disciple may cross the threshold of the initiations and make use of the higher consciousness for some period before he receives the ceremonial diploma, so to speak.

Even though a person may achieve the third degree he may be completely physically unaware that he has taken an initiation. Even so, he will be aware of a “higher calling” and a higher consciousness. In this way he is aware of initiation, but not aware of the details.

The apostle Paul is the most famous case in point. When he saw the blinding light and heard the voice of the Master he knew he had moved to a new level with a new mission, but didn’t know the details as to what a third initiation was.

When Abraham Lincoln underwent the fourth initiation (where he crossed the threshold) he knew that God had tested him and that he had yielded to higher will but wasn’t sure what it was all about.

When an initiate is reborn he usually passes through his past initiations without a lot of fanfare and no ceremonies until he arrives at his consciousness of his last incarnation, usually by the age of 21.