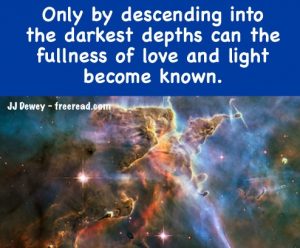 I will start with commenting concerning the illusionary belief that many in the new age glom on to. That is the thought that there is no evil, no Dark Brothers and any problem with dark attacks is either from the imagination or from the fact that too much attention is spent dwelling on devils with pitchforks, demons etc.

This is kind of an irritating attitude to present to someone who has had actual experience with the problem.

While it is true that some problems with what appears to be dark forces are really with disturbances in the emotional body caused by nourished fears, it is also true that there are real problems and real encounters with dark forces which the disciple must face and master.

I had my first encounter with a dark attack with I was a boy of 16 and at the time I was dwelling on nothing negative, had no fears and was nourishing no fears. My mind was focused for the first time in my life on seeking greater knowledge, and this apparently was a threat to the Dark Ones that they wanted to nip in the bud.

I was attacked with a ferociousness beyond anything I have written about and way beyond any result from fear or wrong belief.

The existence of Beings on the Light and Dark sides do not depend on our thoughts for their existence.

Perhaps this parable will help.

Sandra had saved up $5000 which she dedicated to a vacation with her daughter Sue. They were both very much looking forward to the experience which to happen the following summer.

One day Jeb, her out-of-work boyfriend, came to her and said:

“I have just come across the deal of the century that will solve all my financial problems. There’s this new multi level company that has a product that can grow hair back in sixty days. This will sell like hot cakes and the good part is that they have just a handful of charter distributorships that they are releasing to select individuals over the next 30 days. This is a one time deal that will not come again.

“What makes you think this will make money?” asked Sandra.

“Make money!!!” said Jeb. “This will make millions! It grows hair like magic. Here, look at these testimonials they gave me. This is a real ground floor opportunity and the company expects charter distributors to be making $100,000 a month within 90 days. The good part is all I need to get in on this is $5,000.”

“But what if it doesn’t succeed?” she said. “I promised Sue that vacation and don’t want to disappoint her.”

“But what if you just can’t sell the stuff?” she pleaded.

“No problem,” said Jeb. “The company guarantees our investment. In addition to tapes, videos and literature they give me $10,000 worth of the formula. If worst comes to worse they will buy it back from me. When the 90 days has passed and if by some freak of nature I have not made big bucks then I will sell the formula back to the company and give you your money back.”

“And you would promise to do that?”

When her daughter Sue found out about it she was gravely concerned. “Mom, I just can’t believe you gave our vacation money to that loser. He’s never been successful at anything he has done. We can just say goodbye to our vacation.”

“Now sweetie, we must not think negative thoughts. The original investment is guaranteed and if we think positive thoughts about Jeb I think he will make it this time.”

“There’s no guarantee with that guy,” said Sue.

During the next month Sandra saw Jeb numerous times and each time he was cheerful and optimistic and assured her all was going well. Then on the second month he didn’t drop by as often.

“He’s avoiding you,” said Sue. “He’s losing our money and doesn’t want to show his face.”

“He’s just busy,” said Sandra. “Now stop this negative thought. If we send only positive thoughts toward Jeb and the company then we will only experience positive results.”

“Nonsense,” said Sue. “You need to reel him in and get the facts about how he is doing and salvage what you can if he is screwing up again.”

“There’s no reason not to trust him,” said Sandra. “He deserves a chance.”

During the next month Jeb only came by when Sandra invited him to dinner or went out of her way to see him.

At the beginning of the third month Sandra asked him how he was doing.

“I’m so close I can taste it. The money is so close it’s chilling just thinking about it.”

“It’s tied up in product and promotion and I won’t be getting a big commission check for another month. But don’t worry, everything is going as planned. This is such a great company!”

Sue was upset that her Mom did not get more specifics.

During the third month Sandra only saw Jeb twice. After the 90 days she called him to see if she could get her $5,000 back and his phone was out of order. She drove across town to his apartment and knocked on the door. There was no answer. She put her ear to the door and heard the television on so she knocked again.

She remembered that he often left the back door unlocked so she entered through there and sure enough found Jeb slinking in his couch in front of the TV drinking a beer.

“It’s gone,” he said looking at the floor.

“The miracle stuff doesn’t work like they say, gives some people rashes and is tough as nails to sell.”

“So, let us return your inventory and get our money back.”

“What do you mean can’t?” screamed Sandra.

“They don’t want to buy. They’re all like me. They want to get rid of their stuff.”

“You knew this in the beginning didn’t you? You knew it wasn’t the company, but you knew you would be depending on other distributors to bail you out, didn’t you?”

Jeb looked at the floor.

Sandra now knew she was betrayed by one she had trusted all to much and she in turn had betrayed the trust of her daughter.

(1) Jeb is the way he is – an unreliable person – no matter how supportive or positive Sandra is. In this case Sandra is an enabler.

(2) The company is the way it is no matter how supportive or positive Sue or Jeb is.

(3) The Dark Brothers exist and work their plans no matter how positive any individual is. Being in denial and thinking positive alone is not enough to solve the problem. But just as Sue could have taken a wiser course and saved her $5,000, even so can we wisely deal with negativity on whatever scale it presents itself to us and minimize the damage.

Most of the dark forces the seeker has to deal with are from the Dweller on the Threshold. For further information on this topic you can do a search in the archives. Then if you become a threat to some plan of the Dark Brotherhood they may attack you personally, if they can.

Whatever the source, the principles of dealing with the problem is similar.

Below are some excepts from advice I sent to a reader who had a similar problem. It helped him and may help you.

Dealing with dark forces is difficult, but here is a key which has helped me and should help you.

The Dark Brotherhood are like vampires and feed off of our energy so the important thing is to not give them any attention.

They use fear to stimulate a flow of our energy in their direction and after this occurs feeding them becomes a viscous circle.

The key is to not fear when you feel their vibration. Calm yourself and occupy your mind with other things, no matter how distracting the influence may be. Put your mind in a state as though they did not exist and live your life as if everything is the way you want it to be.

If you successfully do this their power will die through attrition.

Another thing is to make sure you are purged from guilt. If you feel guilt over anything confess the cause to a priest, a friend or to the person who is the cause and then follow the above instructions.

Once you have taken practical steps for your guilt it should dissipate. If it does not you must take your attention off of it with the realization that God does not condemn you. The dark forces often attempt to give you guilt by pretending to be the voice of God.

Shifting your attention away from guilt, fear, and the negative vibration is something you must do. I know from experience.

Here is a copy:

We thank you Father that you have revealed to us your protective universal light; that within this light is complete protection from all destructive forces; that the Holy Spirit of Your Presence permeates us in this light, and wherever we will the light to descend.

We thank you Father that you fill us with your protective fires of love; that within this love is complete protection from all destructive thoughts and feelings; that the consciousness of Christ is lifted up in us in this love, and wherever we will the love to be enflamed.

If you continue to not fear and act as if the negative does not exist you will find one day you will be free and normal and it will be difficult to pinpoint the moment it happened.

This is not putting yourself in a state of denial. You realize the danger and the existence of these forces, but the key to mastering them is to let them pass through you taking no energy rather than rather than fighting and giving them energy.