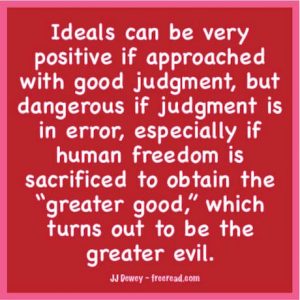 What do you suppose are the three sub aspects of the Sixth Ray? The answer to this one is not so obvious. Here are my thoughts on it.

This principle gives us a hint as to the direction to seek the sub rays of the Sixth Ray of Idealism.

Idealism would therefore be one of the sub rays.

What are then the other two?

First we look at other words associated with this ray. The two that stand out are “devotion” and “desire.” The word “emotion” also comes to mind, but the word desire covers the emotional principle involved. The emotion associated with the Sixth Ray is basically an emotional desire of attachment.

So how are these three sub aspects related?

(1) The ideal is presented

(2) The vision of the ideal is seen and a desire to manifest the perfection of it grows within.

(3) The Sixth Ray person then through this desire to manifest the ideal, or the perfect, becomes “devoted” to the cause.

Thus we see the interplay of idealism-desire-devotion.

The Christian Church is a prime example of this Ray.

Jesus, a Sixth Ray disciple under the influence of the Christ who is on the Second Ray presented the ideal of the perfect man, the perfect salvation and the perfect church. Followers desired to manifest these ideals and devoted their lives to it.

Unfortunately many Sixth Ray people become over zealous to manifest their ideal and are willing to impose it with force if necessary.

The Sixth Ray was the powerful ray of influence during the Piscean Age. On the positive side it presented the ideal as manifested by the Christ, but on the negative it encouraged the fanaticism of the crusades and the Conquistadors.

The Sixth Ray also sheds light on the number of the Beast, or 666. Let me quote from a previous post:

“Thus we finally arrive at the core meaning of the number of the Beast, the 666. In plain English it stands for the control through the Sixth Ray Solar Plexus Center over the three basic worlds of livingness for mankind. (1) Control over The Physical (first 6) Control over the Emotional (second 6) and control over the Mental by negation (the third 6. All three of these parts of our nature have been controlled in most of us by the Sixth Ray of idealism by the Beast.

“Now go back and read the verse about 666 again: Rev 13:18 Here is wisdom. Let him that hath understanding count the number of the Beast: for it is the number of a man; and his number [is] Six hundred threescore [and] six.

“Notice the wording here. “Let him that hath understanding.” In the Greek it literally reads “Let him who has a mind…” In other words, the meaning of the 666 is not obvious, but requires mind and understanding to comprehend it.”

An obvious one is Barbara Streisand with her powerful emotional appeal.

Bill Clinton is also strong on this ray and this accounts for the strong attraction between these two people.

Jimmy Swaggart is a third person very much into Sixth Ray.

Richard Dreyfus is a more positive example of this ray.

Here are some more comments from Djwhal Khul about this Ray:

THE SIXTH RAY OF DEVOTION

This is called the ray of devotion. The man who is on this ray is full of religious instincts and impulses, and of intense personal feeling; nothing is taken equably. Everything, in his eyes, is either perfect or intolerable; his friends are angels, his enemies are very much the reverse; his view, in both cases, is formed not on the intrinsic merits of either class, but on the way the persons appeal to him, or on the sympathy or lack of sympathy which they shew to his favourite idols, whether these be concrete or abstract, for he is full of devotion, it may be to a person, or it may be to a cause.

He must always have a “personal God,” an incarnation of Deity to adore. The best type of this ray makes the saint, the worst type, the bigot or fanatic, the typical martyr or the typical inquisitor. All religious wars or crusades have originated from sixth ray fanaticism. The man on this ray is often of gentle nature, but he can always flame into fury and fiery wrath. He will lay down his life for the objects of his devotion or reverence, but he will not lift a finger to help those outside of his immediate sympathies. As a soldier, he hates fighting but often when roused in battle fights like one possessed. He is never a great statesman nor a good business man, but he may be a great preacher or orator.

The sixth ray man will be the poet of the emotions (such as Tennyson) and the writer of religious books, either in poetry or prose. He is devoted to beauty and colour and all things lovely, but his productive skill is not great unless under the influence of one of the practically artistic rays, the fourth or seventh. His music will always be of a melodious order, and he will often be the composer of oratories and of sacred music.

The method of healing for this ray would be by faith and prayer.

The way of approaching the Path would be by prayer and meditation, aiming at union with God.

Question: Why do you suppose the word “magic” is associated with this ray?

What are the three sub aspects?

“The key is to not fear when you feel their vibration. Calm yourself and occupy your mind with other things, no matter how distracting the influence may be. Put your mind in a state as though they did not exist and live your life as if everything is the way you want it to be.”

The reader notes that I criticize the new agers for not accepting that dark forces exist yet I seem to be advising the same thing.

I thought some astute reader would make this observation and figured I would cover this thought in a later post.

There is a subtle, but distinct difference here.

There are two items that I talked about:

(2) How to deal with them once they manifest.

The solution I spoke of in the quote was related to number two, but my criticism of New Agers was for their illusion concerning number one.

As I said when I had my first attack from dark forces I was experiencing no fear and dwelling on dark forces was the last thing on my mind. Yet often times when I have mentioned a struggle with dark forces to my new age friends they tell me this occurs because I dwell on it too much or because of my fears.

This is just not true.

Just like the lazy boyfriend (see previous post) and the deceitful company exist and may present themselves in your life no matter what your fears or belief system, even so the most fearless and innocent of all may encounter great forces of darkness.

In fact the true forces of darkness are not all that likely to attack one who is already full of fear and wrong belief. They are more likely to use such a one as in instrument for their purposes than attack him. Why attack an ally???

On the other hand, dealing with an attack is a totally different matter and this territory is not even covered by those who have the type of new age belief I mentioned.

Because they do not see any type of Dark Brotherhood or dark forces as any part of their reality so they never even look at the solution. They’re a little like the mother in the parable who wanted to ignore the possibility that anything could go wrong – thinking this would protect her against disaster.

Thus my solution to problem number two cannot be the same as the New Agers because they present no solution as they do not even acknowledge that such a problem could exist in reality.

Believe me, if the typical “see-no-evil” new ager experienced what I have out of the blue he would live through a fear that he did not even know was possible to exist and have before him a disturbance more difficult to ignore than the pain of blowing your hand off.

Even so, after two years of struggle with, after my first attack (having no one to confer with) I finally discovered the secret to defeating those who were seeking to destroy me. The secret is not to pretend they do not exist, for in this reality they do. The secret is to tune them out and place yourself in a state of mind as if they do not exist.

You approach a state of “isolated unity” as Djwhal Khul calls it.

One of the main causes of a dark attack is that you are making progress upon the spiritual path and may become in instrument in bringing unwanted light to the kingdom of darkness. But once an attack has taken place the only way the entities can retain a foothold is through your own fears and attention. When the disciple detaches himself from fear and attention on the dark forces, they will dissipate and lose their hold.

It’s a little like detaching yourself from pain. I practice this when I go to the dentist. I don’t rarely use Novocain, gas or hypnosis even when I have a root canal as it is good practice in realizing the recognition of the negative, but not allowing yourself to be affected by it.