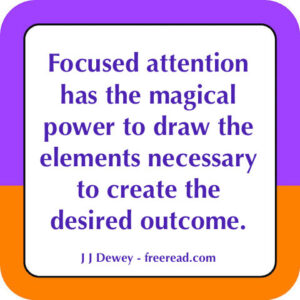 We’re going to do something fun now. Has everyone seen one of these before? (Shows a large crystal) There is an interesting account about the story of Christ, as it’s told about three centuries after His crucifixion. In many of the very earliest pictures of Christ He’s shown with a wand in His hand and He was healing by the powers of a magic wand. Others have Him with a scepter in His hand like a king. The early pictures have Him with a scepter or a wand, and there are stories that when He healed, He actually healed with the power of a wand. All the legends and the stories that we hear have a certain amount of truth. Do you think there is truth behind the story of a magic wand? Does it correspond at all to the fact that Moses had a rod himself? And Aaron? After all, Moses parted the Red Sea through the power of the rod.

(Note from transcriber: JJ pretends to let the large crystal slip from his fingers, but then catches it. The audience gasps in horror as they think the crystal is going to be shattered but then laugh like crazy when JJ catches it and they realize it was JJ’s strange humor.)

JJ: I was just thinking while I was holding the crystal, “Wouldn’t it be funny if I dropped it and it shattered all over?” Then I couldn’t resist almost doing that.

This is going to be our group crystal and we’re going to energize it with our energy. The teaching behind crystals is that they’re capable of absorbing energy. Ren told us what happened with his small crystal. Imagine what would happen if we gave him this big crystal! (laughter)

Ren: Can I explain some things? This particular crystal is called a smoky quartz. You see it’s shaped pyramidal? This is cut this way. It didn’t grow like this. This came from another crystal but it’s well cut and looks very nice.

Ren: For one thing the edges are really sharp and they’re uneven and where they join right here they’re not precise which is kind of a way of making it look more natural. It’s been polished and cut. If you look at a natural one it doesn’t look like this plus there aren’t this many sides to a natural one.

JJ: I thought I had a natural one.

Ren: It is natural. It’s just been cut. It probably cost about $80.

JJ: When I looked on the internet, they were about $300 for this size.

Ren: If it’s natural, yea. This is what’s really interesting about this. You’ll see what looks like cracks or something on the inside. When this crystal was being formed water gets trapped over the course of time as it’s forming, very slowly. This takes a long time. As it’s forming the water is trapped and creates fissures inside the crystal. So this that you’re seeing here could be hundreds and thousands of years old. Smoky quartz is a pretty common crystal. The smokiness is caused by mineral content in the crystal as it’s being created. Potassium makes the amethyst. There’s another one called rose quartz. They do not know why it’s rosy colored like that. There is not a scientific explanation for why rose quartz becomes rose colored. They do know why this is smoky and they know why the amethyst is purple but they don’t know why a rose quartz is rosy in color.

JJ: Interesting. Are you sure this isn’t natural? What shape do you think it was before they cut it?

Audience: I have natural grown crystals JJ. They grow crooked.

JJ: This is about the closest to a large wand shape I’ve seen out of all I’ve looked at.

Ren: Being cut is certainly not going to affect its ability.

Now we’re going to do something else as we go along here. Since I can’t afford to give you each a crystal I’m giving you each natural wood. We’re going to use these as your mini magic wands. Wood is very good because it comes from a living source. We’re going to pass the crystal along and you can concentrate with your little magic wand and do the same thing and energize your magic wand with the power of the group energy. Do yours then pass it to the next guy so we get energized by everyone in the group. When you have the crystal, just do the crystal.

Audience: In the Wiccan culture whenever you energize or charm something you hold your left hand up to receive energy then it passes it to your right hand.

JJ: That probably helps a little but it’s not absolutely necessary. The main thing is the power of your thought. It will work better than anything. If you want to do the Wiccan culture of doing it, go ahead and do what feels natural.

Audience: Is this just symbolic?

JJ: It’s more than symbolic. You can charge up any substance. That’s the power behind seer stones that the early Mormons used. They had been charged with a certain type of energy.

OOOMMMMMMMM. When you touch it to your forehead try to see a light. Pass your wand to your right

(Transcriber’s note: it is interesting that the studies of Dr. Masaru Emoto have shown that water is strongly effected by thought. Since this is so it is only logical that other elements could be effected).

Last time we were together and had a meditation we heard some singing. We didn’t know where it came from. It was really weird. I thought it was Belema singing but she said it wasn’t her. It was like a presence was there singing with us. How many here were there last year? Did you hear the singing? We interrogated everybody and everybody said it wasn’t them. Now we hear OM but there doesn’t seem to be anyone saying it. It sounds like it’s in the kitchen. OOOMMMMMMM

Of course the purpose of oil was to stimulate the spiritual flow of energy for healing ceremonies in the ancient church. Now, let’s gather around Barbara. Put this on your third eye and others focus on the area she wants the healing sent to and touch her with your wand.

OOOMMMMMMMMMMMMM We, the servants of God, are sending you healing energy. Do you accept it? OOOMMMMMMMM

Susan speaks: We’re going to have class for five hours tonight. Just kidding. We’re going to have class until 8:30 then we’ll have some wine tasting in the back. We have some wines from Mount Pleasant Utah. The wines are dry and they do not have any sulfites. They’re organic wines. Plus Assaf has brought two wines from Israel for us to taste. Remember when we bring the wine out that this is wine tasting so just taste it. There isn’t enough to have lots but there is some boxed wine you can have too. After that we’re going to do karaoke. Peggy and Scot will be doing that for us.

Since we had this announcement about the floating cities and various places in the United States plus that many around the world that we’re going to be organizing in the next 20-30 years I thought it would be good if everyone got up for a few minutes and told why they thought were drawn to this gathering and what talents they think they have in order to make a city of Zion or a gathering place. What special gifts do you have in order to make that a reality? I’ll start. I told you before that my son in law and I are starting an energy company. One of the things we’re working on is a magnetic motor that will give the cities power so that we do not have to be on the power grid. So, that’s something I’m working on, alternative energy for cars, for houses and things that are used in alternative health. That’s what I’m doing to help bring forth the city of Zion.

Love is the extremely difficult realization that something other than oneself is real. Iris Murdoch (1919 – 1999)