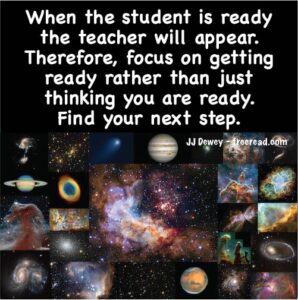 At the last gathering we talked about the Avatar of Synthesis which is a great avatar that was prophesied would come and assist the Christ in His work and He would work invisibly behind the scenes. He’s such a great entity that He can only descend to the mental levels. Does anyone know what that means?

Audience: My guess it that He can only be perceived mentally through our minds. We wouldn’t be able to feel Him or to see Him.

JJ: Right, you could feel Him though because the mental body is linked to the emotional body. In other words, He can come and approach a group and work through the group by transmitting spiritual power or transmitting impressions or revelations and communicating things that will assist the Christ in His work. He’s basically come to assist in preparing for the Christ who would be here after He comes. He’s called the Avatar of Synthesis. DK tells us He has come from another solar system to assist us here. So we’ve written this Avatar Invocation. Last year we told everybody to think about the Avatar of Synthesis and hope that by this year perhaps we would be mentally prepared to receive impressions from Him. So let’s go through the Avatar Invocation. I’ll read over it first.

From the center where the Will of God is known, let purpose guide the little wills of men.

JJ: Have you heard this before? Where is it from?

JJ: Right, that’s a line from the Great Invocation. The rest of it takes off from there.

Let the One Great Life manifest its Purpose and send fourth His Avatar.

Let this Master of Purpose come fourth and amplify our wills to synthesize them with his own, giving us power to serve.

That we may prepare the Earth for the Lords of Light and Love.

Let Will and Power and Purpose manifest the Christ on Earth.

JJ: You notice the Great Invocation ends with ‘let light and love and power bring the plan on Earth’ but here we have ‘let will, power and purpose.’ That’s because the Avatar of Synthesis is on ray one, which is the ray of power. The scripture says, “Zion must needs be built by power.” What does that mean?

Money is power. Spiritual power. We need spiritual power to have the new age come in and Zion be built. We also need power over the enemies of light and love. Scripture talks about Christ obtaining power over all His enemies and that last enemy that will be overcome is death. In between humanity conquering death and where they are now, they must conquer all of their other enemies. By conquering enemies it means to put the enemies in a situation where they have no power to harm because whenever any light tries to do something good there is always some enemy coming out of the woodwork.

“Zion must needs be built with power.” Power must be given to the lights in order to neutralize their enemies. This is one of the purposes also of the Song of the 144,000, to protect the lights from negative forces, to surround them. By saying this as a group, and eventually thousands of people saying it will bring down light and love and power. Their enemies of that which is good will not be able to overpower them.

In every past age, sooner or later, the lights have always gotten overpowered. After Christ was crucified every one of the disciples except for John was killed. The church was prevented from manifesting the true spiritual powers it should have because it was overcome by the beast of the time. It’s been the same with every other attempt to create Zion upon the Earth. Let’s go through the invocation with a short pause between the stanzas.

From the center where the Will of God is known, let purpose guide the little wills of men.

Let the One Great Life manifest its Purpose and send fourth His Avatar.

Let this Master of Purpose come fourth and amplify our wills to synthesize them with His own, giving us power to serve.

That we may prepare the Earth for the Lords of Light and Love.

Let Will and Power and Purpose manifest the Christ on Earth.

JJ: Can we put out the appeal to contemplate on this as we do our different types of group work? Contemplate on the possibility that the Avatar of Synthesis is coming. If we keep saying this invocation and thinking this, sooner or later we’re going to be picking up some very strong impressions.

Audience: Will He only manifest to a group?

Audience: When this is materializing and there are floating cities and this floating highway. . .

JJ: That’s why we have to start with a larger number than they can manifest against us. We’re not going to start with 50 people. We’re going to start with thousands of people going out there with power and strength and financing and everything we need to do it right. One problem is that the lights always try to do everything prematurely without enough power to do anything and wind up failing time after time. We’re so anxious. We see a vision. We want to manifest it and we take off half cocked, ill prepared and we fail again and again.

I’ve had enough failures in my life to really understand this principle well. (laughter) My failures that I’ve had in my own life in businesses and other things that’s I’ve done have prepared me to see that this has to be done right. Without doing it right, without laying the foundation, without the numbers, the financing, the people, the support we need, it would fail. Anyone who has tried anything like this has started small. Fifty people is the most I’ve heard of. Most of them have about 5 people interested in their ideas. I’ve come across about a dozen different projects to build their own nation somewhere. They don’t have enough people interested.

Dan: I need to clarify that the fifty people were physically working on projects but there were hundreds of people, maybe thousands, connected on the internet. There were a lot of people.

JJ: I didn’t realize it was that big. That still wasn’t enough though, was it? You could have billions of dollars and not do it right and waste it all if you have people who are not in harmony with each other. The harmony is the hard part. This is why we teach soul contact so much. If we have a core group with soul contact who feel through the spirit that we’re headed in the basic right direction then we won’t have so many problems. But if you get a bunch of hard core survivalists together and they all think different from the others it’ll be really hard to get them to merge.

The lower evolved people get some authority over them and they unite pretty well but you get people evolving up to the mental plane and all of them have different ideas. It’s really hard to get the intelligent people together and the only way to do it is through the soul, through the power of the soul, by them sharing the spiritual energy so they sense whether something is right or not.

They need to have that sense about it so even very strong independent people will cooperate. You’re an independent man but if you felt something stirring within you that felt right wouldn’t you think you should give it a chance? If you didn’t feel anything from the spirit and your mind told you that you could come up with a much better idea then we wouldn’t be cooperating. Many of these highly mental people have this problem. It’s a big competition as to who has the brightest ideas.

By the time we start this thing we’ll probably have twenty different constitutions written up by twenty different individuals who are trying to help us out and they’ll all be disappointed if we don’t use them. We’ll probably have about a hundred logos created for something. Now is not the time to create logos or a constitution. Now is the time to gather the lights. When the time comes that we have some power that’ll be the time to put everything together. Be thinking about what works now and what doesn’t work.

Make sure you have finished speaking before your audience has finished listening. Dorothy Sarnoff