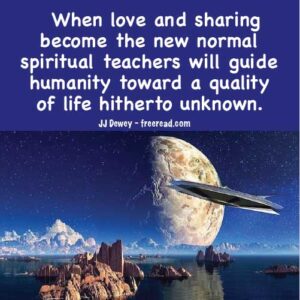 Assaf: So the gathering, where will it take place?

JJ: That’s a great mystery, isn’t it? I haven’t told the group in all this time but I’ve decided to tell you today. Would you like to hear? Lorraine got it through her own inspiration, didn’t you Lorraine?

JJ: I’ve given several clues but Lorraine is the only one who’s gotten it in this room. And that guy in prison got it. I know Susan has really been wondering about it. (Actually, she already knew)

Audience: There is a guy on the internet who is developing a new system. He’s building an island in the Gulf of Mexico and he’s creating a new nation that nobody has any claim on. It’s called the New Utopia. My guess is that you’re going to do something similar.

JJ: There are a couple people doing that. One guy wants to be king. He’s not going to gather very many because if you go there you have to call him King and he’s the sovereign there. That’s going backwards. We don’t’ want to establish a kingdom. You don’t want to call me King JJ, do you?

The first step in the gathering is the internet. But we have a long way to go yet. Eventually, we are going to need some type of breakthrough where the idea gets a lot of international attention.

When millions of people are affected then we’ll have power to gather people in various cities with one major area as a focus.

Finally, the gathering will take place on this earth in a place that’s been reserved for this purpose since the beginning of man. It even speaks of it in the scriptures. Remember the scripture I told you about, “a highway shall be cast up in the midst of the great deep.” I said that had more than one interpretation. What’s the other interpretation?

Here is another scripture: “Wherefore, prepare ye for the coming of the Bridegroom; go ye, go ye out to meet him. For behold, he shall stand upon the mount of Olivet, and upon the mighty ocean, even the great deep and upon the islands of the sea, and upon the land of Zion.” D&C 133:19-20 When Christ comes again where shall He stand?

JJ: Let’s look at it again. “upon the mighty ocean, even the great deep.” How will Christ stand upon the ocean when He comes?

JJ: No, it will rise up in the ocean but first a highway will be built. We are going to build the highway. We’re going to build a highway in the midst of the great deep then when Christ comes He will stand upon it. Let me read you this scripture. This scripture has dual meanings. Something similar is said in Isaiah but this is clearer.

“Behold, I, the Lord, in the beginning blessed the waters; but in the lasts days, by the mouth of my servant John, I cursed the waters. Wherefore, the days will come that no flesh shall be safe upon the waters. And it shall be said in days to come that none is able to go up to the LAND OF ZION UPON THE WATERS, but he that is upright in heart.” D&C 61:14-16

Imagine that we have the United States here and Europe across the waters. Imagine we have a highway that connects the two across the ocean, a highway composed of homes and businesses and cities that stretch from one place to the other. Now imagine over here we have California and we have Japan and we build another highway that reaches clear across the Pacific Ocean. Eventually those two highways will connect the whole Earth so the whole Earth will be like one land. The prophecy is the whole Earth will be one land but perhaps this is going to happen differently than what everyone thinks. Not that the oceans will be dried up but that they’’ be connected by the highways cast up in the midst of the great deep.

JJ: It’s not there yet. We have to build it. It won’t be concrete. Matter of fact Rick had inspiration on this and we wish we had him here today so he could show us the building materials he designed. He’s creating some of the perfect building materials that we may need. What we’ll do is to create floating cities and connect the floating cities one to another. The ocean is the only place that we can go where we will not be under the power of some authority, where we can put together a type of system that will be totally different than the world has ever seen before.

JJ: No one owns the ocean. In international waters if some island were to sprout up and you were to go put a flag on it, then you’d have your own country.

Audience: Submarines go everywhere. If the Soviet Union were to bring submarines in the middle of the Atlantic Ocean others will complain.

Audience: I think there is a 20 mile area where anything 20 miles off the coastline is intternational territory.

Audience: Powerful countries could somehow take it but the power of God would protect it.

JJ: Right. The scripture says a person will have to be pure in heart to go up to the land of Zion upon the waters.

Audience: Doesn’t that also imply that those in the cities. . .

JJ: Right and this is what’s going to happen. We’re going to gather first of all the most intelligent people into the cities in the various gathering places. There will be one main gathering place on land with numerous smaller ones linked. Then at a time when many of the governments are collapsing and suffering financial distress with their systems taxing people more and giving people less. If they continue on this route the economy around the world is going to go downhill. Then when we get enough people together, we will go build floating cities and on these floating cities we will gather the greatest lights of the Earth including many of the greatest scientists.

Assaf asks how can we make sure only the pure in heart will be gathered in these cities. You don’t make sure. You put out the call. How do we know that everybody who came to America was pure in heart? Everybody wasn’t. There was an opportunity signaled and the opportunity gathered the people. It’ll be the same this time. Not everyone who goes to the floating cities will be pure in heart, but overall they’ll be head and shoulders over the average person sitting in the nations left behind.

Audience: When you think about the people who will be attracted to this kind of thing they won’t be the nay-sayers. The people low in evolution will not want to go to the next gathering. They’ll want to hold on to the old ways. So we’ll gather the best of the people because they’ll be able to think forward and not backwards.

Audience: You said this has to happen before Christ will return?

Audience: What about Independence, MO?

JJ: Nothing is going to happen there for some time. Once the gathering takes place upon the waters then the big test will be how the nations will handle it. It says in the scripture it calls the church of God a woman, in the book of Revelations. It says the Earth helped the woman. In other words, when there are enemies to the forces of light the Earth will help them. When the intelligence that is the Earth sees that there is a gathering taking place where there will be a new step in evolution, the Earth will assist us. The Earth assisted Moses so he was able to part the Red Sea and drown the Egyptians, the Earth helped the gathering to prevent the enemies of the gathering from stopping it.

Life is a dream from which we must wake before we can dream again. Robert Jordan, The Fires of Heaven