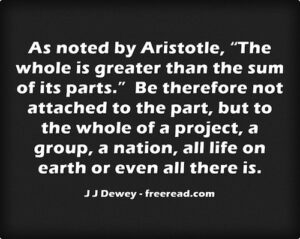 JJ: Atoms gather together to create molecules and molecules gather to create cells. After the cell is created the atoms and cells still maintain their individual existence but are united to create something greater than themselves.

Atoms of hydrogen and oxygen and carbon, they still exist. An atom can exist for billions of years in the same form, the same shape, the same state of relative perfection but because they’re in relative perfection they needed to seek experience, something of interest and something higher than themselves. The little electron going around in a circle playing with the proton could be really bored to live that experience over and over for eternity. They want to go to something higher now because they have reached perfection.

So the atoms are seeking consciousness in the cell. They’re identifying with the cell as a whole and as a cell is being created, they’re having fun with molecules by sharing consciousness with them in creating the cell. They don’t have any fun anymore if they limit themselves to their own creation because they understand everything about it.

Audience: It sounds to me that what you’re saying is these atoms and these molecules have reached the potential for their enjoyment. They are being fulfilled completely, and in that fulfillment they cannot be fulfilled any more at their level so therefore need to rise in consciousness. Yesterday you talked about the male and female energy where we have one unit and we’re moving things around trying to find this balance and we have this spiritual love to give. If we can find the right balance and somehow find the right organization to reach everybody’s needs with this unit we will have achieved. Is that correct?

Audience: If we can achieve the ratios, the numbers or whatever to provide full fulfillment for every member or individual for that group and make it stable, that will be the next big thing.

JJ: Yes, it allows us to move on to the next big thing. When I was a kid we didn’t have very much money. I could never get enough money for all the chocolate I wanted to eat. Finally, I got enough money that I could buy all the chocolate I wanted and ate a bunch, but pretty soon I didn’t want it anymore. I hardly ever eat it now but these candies they give us here at the motel are super good so I did eat a few of them. It’s the same with a lot of things. You really want something, you eat a lot of it then the novelty wears off and you want to move on to something else. This happens to the life forms when they reach perfection. What they had was good but now they want something else. They’re tired of the chocolate they had. The chocolate was great but they perfected their chocolate and it can’t get any better so they want to move on.

The cell then creates other life forms and these greater life forms can have a greater experience than a cell. The various cells created the kingdoms of nature. Vegetables have more things happening than a rock. Vegetables have a feeling nature about them. The animal kingdom has the ability of motion, moving around is something a tree can’t do. So once the consciousness moves into an animal and can move around it doesn’t want to be a tree again because it’s much more fun to be in an animal that has the capacity of motion. Once the consciousness gets in to a human and can have self-consciousness, and also be a creator, that makes things all the more interesting.

When you look through a microscope at the microcosmic world it’s amazing the complexity there. Just to map the human genome took a tremendous amount of computer power and years of work. The complexity boggles the mind how the human gene was put together and we still don’t understand how it works or understand the DNA so understanding the cell as a whole is extremely complex.

For all those molecules to build one cell is like us building an artificial earth out of all kinds of intricate metals and glass and fibers and things. Imagine us getting together and building a whole earth. The complexity of a cell is enormous to the scientist looking through a microscope. Even Jesus commented on it. He said, “Consider the lilies of the field. They have more glory than Solomon ever dreamed of having with all his temples of gold and silver.” In other words, if you look at the lilies of the field under a microscope the glory of God is there. The intelligence of God is on display there.

So, here we are. We are the result of all types of gatherings. Over billions and billions of years all types of gatherings have taken place to create us as human beings. In the Molecular Relationship the next step is for human beings to gather together to create human molecules. This is what Jesus did. He gathered twelve males and twelve females together to create a human molecule. Oxygen and hydrogen by themselves produce rocket fuel. They’re two explosive ingredients in rocket fuel. When you join them together as H2O, or water, it produces one of the most stable compounds in existence. We then have water, which is totally different than either hydrogen or oxygen.

Jesus was a great chemist. He gathered together a molecule of twelve atomic units. One human atom is composed of a male energy and a female energy united in a stable condition. Jesus took twelve of these and He created a human molecule with properties totally different than they had as individuals. We talked about this a lot in the Molecular Relationship. That’s a gathering that leads us in our evolution as units.

Now we go back to the beginning of our civilization and apply the gathering principle there. What do you think the first human communities were like?

JJ: Tribes. Do you think that was it?

JJ: It was probably tribal families, right? In these tribal families they had children and the children had children. They kept them together for various purposes. For one thing, they had to be gathered together to survive. They were fighting giant beasts back in those times and they had to fight for their lives against the animal kingdom. DK says something interesting about the animals in this relation. He says that in the beginning of our evolution it was the animals that dominated humans and they killed very many of us. It was a common thing for humans to be killed by animals in the early civilization. He says that now we’re eating the animals and have domination over them. According to him it’s basically karma for the animals that we now eat them whereas they used to eat us. That makes sense.

First they gathered into family tribes then later they gathered into greater tribes. A tribe was a combination of a number of different family units that agreed with each other. They had to have some greater numbers in order to survive. They had to fight the animals and the other tribes and protect themselves so for protection a lot of people gathered together into larger and larger tribes. The tribes got so big and the tribes were fighting against each other so the idea of the next step in the evolution of the human family came to mind. What was this next step?

JJ: A kingdom, right. A number of tribes got together one day probably before the days of Atlantis, back in Lemuria. They thought of the idea to get a bunch of tribes together to produce a kingdom. We’ll have one king over all these tribes and this king will have absolute power. This will control everybody and will produce stability and our kingdom will have power over all these tribes. We won’t need to worry about tribes attacking us because our kingdom will be able to put down any tribes out there. This is how the kingdoms got started.

Once the first kingdom got started a numerous other tribes that were getting squashed by the kingdom knew they needed to protect themselves from the big kingdom so other tribes gathered together to produce a counter force. Eventually a second kingdom arose then a third kingdom and so on.

Happiness is not achieved by the conscious pursuit of happiness; it is generally the by-product of other activities. Aldous Huxley (1894 – 1963), Vendeta for the Western World, 1945