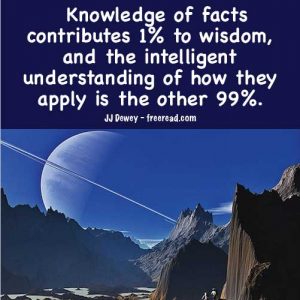 Since the subtle differences between those who are mentally and emotionally polarized are so difficult for many to comprehends perhaps we need to delve a little deeper.

The use of facts for the two groups sheds some light

The mental person will accept and use facts at face value and make sure he understands them correctly. Any deductions made from them will be logical.

The emotional person will see the facts through his emotional filters causing many deductions from them to be illogical.

For instance a headline may read:

Poll shows 87% of Americans believe economy is in trouble.

The emotional person usually accepts such proclamations with no questions asked, but the mental will wonder: “Exactly what was the question?”

When he does do research he may discover the question was asked much differently than was hinted at in the news article. Perhaps the results were so high because the question was:

“Do you think a significant portion of Americans are having economic problems?”

By wording the question in this way the pollster is assured of high results.

But suppose he asked the question this way:

“Is your personal economic situation in trouble?”

Polls are often used to mold public opinion rather than reveal it. Because such a high percentage are emotionally grounded this deception works quite well, but does not usually fool the mentally polarized because they will want to see the questions and analyze them to understand what the opinion really is.

You’ll notice that when the Republican and Democrat parties present their polling results to the public that there is significant difference in the numbers. The Republican poll usually favors their candidate and the Democratic favors theirs. This is because of the way the questions are worded and the selected populace which is polled.

The interesting thing is that they both have internal polls which are much more accurate, which is for their eyes only. Politicians are happy to deceive the public, but they do not want to deceive themselves.

Religion is another area where the facts are distorted. Suppose you open the Bible and read the following scriptures to both an emotionally polarized person and a mentally polarized one. What will be the difference in the way they interpret?

“You shall know the truth and the truth shall make you free.” John 8:32

Emotional Person: The truth is as he sees it and he believes he is free. His quest for freedom is thus at a standstill because he does not see the illusion that holds him bound.

Mental Person: I may think I am free, but am I really? Perhaps there is a deeper meaning. I will think about it.

“For by grace ye are saved through faith; and that not of yourselves: it is the gift of God. Not of works, lest any man boast.” Ephesians 2:8-9

Emotional Person: the preacher spoke well when he said: “If you only have faith that you don’t have do good deeds, or that the deeds don’t count because salvation is measured by faith.”

Mental Person: I wonder exactly what Paul meant here. Perhaps I can get a clue by reading a few more verses. Ahh… the next verse sheds some light:

“For we are his workmanship, created in Christ Jesus UNTO GOOD WORKS, which God hath before ordained THAT WE SHOULD WALK IN THEM.” Verse 10

So, God created us “unto good words” and desires that we “should walk in them.” Obviously more than faith is expected of me – or perhaps true faith requires works.

“Except a man be born again, he cannot see the kingdom of God.” John 3:3

Emotional Person: Only an orthgodox born again Christian can see the kingdom of God.

Mental Person: It appears to me that those who claim to be born again do not see the kingdom of God any more than I do. Perhaps there is more to this scripture than the mere proclaiming of a belief in Jesus. I think I’ll look further into it.

Now let us move on to the next difference between the two.

The emotional person is lazy mentally and always seeks for an excuse to avoid thought.

Mental Person: Just as the emotional person is enthused about delving into the emotional side of life even so the mental is industrious on the mental plane and does not avoid thought, but embraces it.

To illustrate we can examine an emotional response to the current discussion. Because it takes thought and effort to see the difference between the emotional and mental polarization what we need to ask is – what may the emotional person say to avoid thinking about it?

(1) Declare that such thinking is divisive and should be avoided (2) Declare that there is no such thing as polarization, especially for the enlightened, and thus is any further thinking terminated. (3) Declare that looking on the emotional mental side is being caught in the world of duality and he is in a consciousness beyond duality. This declaration releases his from any responsibility of further thought.

These are just a few samples of excuses to avoid thinking. One thing we can say about the emotional people though is that some of them are quite creative and there is no end to the excuses they can conjure up.

Assignment: Tell us of a time that you desired to use thought and explore reason only to have the other person use an excuse to avoid thinking.