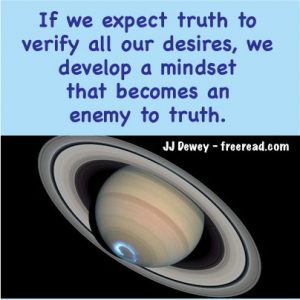 Here is a quote from the beginning of Chapter Four of the Reappearance:

“Today, the East and the West stand equally expectant. As we approach the theme of His work, it is essential that we remember that the Eastern Teacher embodied in Himself the Wisdom of God, of which human intelligence (the third aspect of divinity) is an expression; that through Christ, the second divine aspect was revealed in its perfection; and in Him two aspects, therefore, light and love, received full expression. It remains now for the highest of the divine aspects, the Will of God, to receive embodiment and for this the Christ is preparing. The continuity of revelation may not stop; and upon what other expressions of the divine nature may still later be revealed it is needless for us to speculate.

“The uniqueness of the impending mission of the Christ and the uniqueness of His opportunity consist in the fact that He is able-in Himself-to give expression to two divine energies: the energy of love and the energy of will, the magnetic potency of love and the dynamic effectiveness of the divine will. Never before, in the long long history of humanity, has such a revelation been possible.

The work and the teaching of the Christ will be hard for the Christian world to accept, though easier of assimilation in the East. Nevertheless, some hard blow or some difficult presentation of the truth is badly needed if the Christian world is to be awakened, and if Christian people are to recognize their place within a worldwide divine revelation and see Christ as representing all the faiths and taking His rightful place as World Teacher. He is the World Teacher and not a Christian teacher. He Himself told us that He had other folds and to them He has meant as much as He has meant to the orthodox Christian. They may not call Him Christ, but they have their own name for Him and follow Him as truly and faithfully as their Western brethren.” Reappearance of the Christ, Pages 62-63

Question: The last time Christ was here the emphasis was mostly upon the second aspect of Love/Wisdom. This time he will manifest (in addition to Love/Wisdom) properties of the first aspect of Will. Then he hints at the idea that Christ will strike a “hard blow” to the Christian world to wake them up.

It is likely that this hard blow will come through the Will aspect rather than Love, even though Love will be the motivating force.

Stretch your imaginations and ask yourself this. What teachings or actions could Christ present that would shock the Christian world?

Is it likely that the Christian world will accuse him of being a person lacking in love? Why?

A reader responded saying that Jesus observed the Law of Moses, which was in place last time, so he may just blend in with orthodox religion this time.

Actually, outside of celebrating the Passover, I can’t think of an example of Jesus following the Law of Moses. Nowhere is there any mention of him offering animal sacrifices. He discouraged the stoning of the adulterous woman according to the law. He was consistently accused of breaking the Sabbath. He even broke the law through his death for the law said that he who was hung on a tree was cursed of God and Paul said Jesus was hung on a tree.

Even though he did not observe the law in a traditional sense for himself he admonished those who believed in the law to follow their religion and sought to fulfill the principles behind the law through obedience to the law of love.

In fact, the religious people of his day were so concerned with his teachings that they accused him of attempting to destroy the Law of Moses. He argued, however, that this was not the case as he sought to fulfill the purpose of the law.

If a similar occurrence were to happen this time around, how would it play out?

The bottom line is this. If we look for the traditional Christ we will miss the real one for as it is written: “Behold, I do all things new.”

When Christ came 2000 years ago he was totally absorbed in the second aspect of Love Wisdom. To demonstrate this he taught, acted and worked with this energy which operated as a magnetic force rather than one that radiates. This magnetic force is illustrated in his statement which reads: “If I be lifted up I will draw all men to me.”

He was also described as the “Lamb of God.” Now a lamb is a meek and submissive animal that no one fears because of its harmlessness.

In that life the “turn your other cheek” and “love your enemies” approach to making change would seem very pacifist by today’s standards.

The point to keep in mind though is that the Love Wisdom or Second Aspect is only one out of the Great Trinity. It was an important time and place to emphasize it to the exclusion of others but the other aspects will not always be excluded by any master.

This is hinted at in the Book of Revelations, a book which reveals future cycles. In it, after the lamb had been slain, Christ is called “the lion of the tribe of Judah.” Rev 5:5

So we have the pacifist loving Christ represented by a lamb which is slain and then called a lion and later one who “doth judge and make war.” Rev 19:11

In other words, we have a Christ who worked almost exclusively with the Second Ray 2000 years who is emerging later as one who eventually wields the Will-Power-Purpose of the first ray and acts with the power of a lion.

Does this mean he will be a war monger when he comes?

No, he will still use the Love-Wisdom energy to the maximum amount that can be received, but it does mean that the visible Christ we will see will be the Lion of the Tribe of Judah rather than the slain lamb.

When he comes he will make war in righteousness, but it will not necessarily be a physical war with weapons. A war he will definitely wage will be one against the ignorance and illusion of the world. Because this will be done with first ray energy it will create quite a stir and people as a whole will be strongly divided either for or against him.

The Christian world will have difficulty in seeing him as the Lord of love because of the conflict which will seem to follow after him. On the other hand, the non religious secularists will have as difficult a time, or even more so, depending on the politics of the time.

In chapter four DK makes an interesting statement. He says:

“Let us look for a moment at the erroneous interpretations given to the Gospel story. The symbolism of that Gospel story-an ancient story-presentation often presented down the ages, prior to the coming of the Christ in Palestine-has been twisted and distorted by theologians until the crystalline purity of the early teaching and the unique simplicity of the Christ have disappeared in a travesty of errors and in a mummery of ritual, money and human ambitions. Christ is pictured today as having been born in an unnatural manner, as having taught and preached for three years and then as having been crucified and eventually resurrected, leaving humanity in order to “sit on the right hand of God,” in austere and distant pomp. Likewise, all the other approaches to God by any other people, at any time and in any country, are regarded by the orthodox Christian as wrong approaches, as being practised by so-called “heathen,” and as requiring Christian interference. Every possible effort has been made to force orthodox Christianity on those who accept the inspiration and the teachings of the Buddha or of others who have been responsible for preserving the divine continuity of revelation. The emphasis has been, as we all well know, upon the “blood sacrifice of the Christ” upon the Cross and upon a salvation dependent upon the recognition and acceptance of that sacrifice. The vicarious at-one-ment has been substituted for the reliance which Christ Himself enjoined us to place upon our own divinity; the Church of Christ has made itself famous and futile (as the world war proved) for its narrow creed, its wrong emphases, its clerical pomp, its spurious authority, its material riches and its presentation of a dead Christ. His resurrection is accepted, but the major appeal of the churches has been upon His death.” Reappearance of the Christ, Pages 63-64

Here he calls the gospel story “an ancient story-presentation often presented down the ages, prior to the coming of the Christ in Palestine.”

Does this mean that the life of Christ, or one like him, has “often” been presented during the “ages” of thousands of years before Christ in Palestine?

How much detail do you suppose was presented in ancient times?

Do you think it was possible that Jesus was aware of these ancient stories and attempted to play the role of savior?

Do you think that a number of scriptures are partially fiction or symbolic designed to present true principles?

“He who ceases to learn cannot adequately teach.” Unknown

1 thought on “Expect the Unexpected”