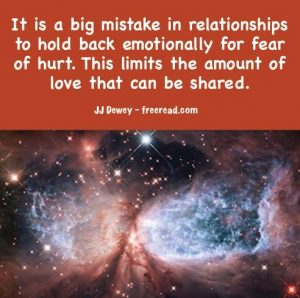 Question: How do we deal with those who either refuse to communicate about emotional hurt or do not take any responsibility for the problem?

The solution is very simple. Your success in dealing with your emotion does not depend on the other person.

It does not matter if he goes into denial.

It does not matter if the other person is not honest or makes no effort to communicate.

It does not matter if he is defensive.

It does not matter if he does not meet you half way.

The answer is always the same. What matters is what you do.

And all you have to do is to tell the person in spoken or written word how his actions effected your feelings.

If he denies that he is at fault, well he may be right in his own eyes. Often our feelings are hurt because of our own internal programming and not because of another person out of line.

And what if the other person is definitely out of line and still denies responsibility?

The question then becomes this.

Do you want to feel better and assume control of your life or do you just want a pound of flesh?

If the answer is the former then all you need do (no matter what the other guy does) is to merely communicate in harmless non attack words how he made you feel.

Once you have done this you must assume control with your mind and let the emotion go. When you do this the negative energy is now the other person’s responsibility and if he does not honestly respond then the negativity will descend upon him and he will suffer for it.

If you then really want to get revenge upon your enemies, just communicate your feelings and then forgive. If you do this and he does not respond according to his soul he will soon partake of the negativity of which you were suffering.

It is the natural desire of the astral nature to want the other guy to admit he was wrong and do penitence, but in the real world this rarely happens and is not the answer to emotional control. Instead, merely send out your true feelings in harmlessness, using soft words, and let the emotion go using harmless words.

This works every time the individual is not attached to revenge.

“I wondered whether you posted that story as a hint?

If I was Jesus, I would come back to Earth working through someone first, (working from the bottom rung of the ladder, upwards).

“Jesus would probably inconspicuously build up a following of people who were open to all thoughts and all philosophies, (through one man or woman), a bit like what DK did with Alice Bailey. Then in about 25 years when everything was going according to His plan, he would step out from the shadows and announce to the world that He was already here, but not until he had enough Disciples or followers working within His light. It would not be something out of the blue, but more like a long drawn out process of planning.”

JJ: The purpose of the parable was to get readers to think outside the box.

Your assumption is actually quite close to the teachings of DK. He tells us that Christ will work through a number of disciples before he appears. He also indicates that either the overshadowing principle or his appearance in his own body could constitute his Second Coming dependent on the need and opportunity.

Esoteric students need to remember that he came last time through the body of a disciple (Jesus) and not in a body of his own. Exactly how he will come this time is not fully revealed, so we must be open to all possibilities.

Here is some great comic relief from Keith. His comments are as good as the strange facts.

(1) DID YOU KNOW…If you yelled for 8 years, 7 months and 6 days you would have produced enough sound energy to heat one cup of coffee. (Hardly seems worth it.)

(2) If you farted consistently for 6 years and 9 months, enough gas is produced to create the energy of an atomic bomb. (Now that’s more like it!)

(3) The human heart creates enough pressure when it pumps out to the body to squirt blood 30 feet.

(5) A cockroach will live nine days without its head before it starves to death. (Creepy…I’m still not over the pig.)

(7) The male praying mantis cannot copulate while its head is attached to its body. The female initiates sex by ripping! the male’s head off. (“Honey, I’m home. What the….?!”)

(8) The flea can jump 350 times its body length. It’s like a human jumping the length of a football field. (30 minutes… lucky pig… can you imagine??)

(10) Some lions mate over 50 times a day. (I still want to be a pig in my next life…quality over quantity)

(11) Butterflies taste with their feet. (Something I always wanted to know.)

(13) Right-handed people live, on average, nine years longer than left-handed people. (If you’re ambidextrous, do you split the difference?)

(14) Elephants are the only animals that cannot jump. (OK, so that would be a good thing….)

(15) A cat’s urine glows under a black light. (I wonder who was paid to figure that out?)!

(16) An ostrich’s eye is bigger than its brain. (I know some people like that.)

(17) Starfish have no brains. (I know some people like that too.)

(18) Polar bears are left-handed. (If they switch, they’ll live a lot longer.)

(19) Humans and dolphins are the only species that have sex for pleasure. (What about that pig??)

Now that you’ve smiled at least once, it’s your turn to spread the stupidity and send this to someone you want to bring a smile to.