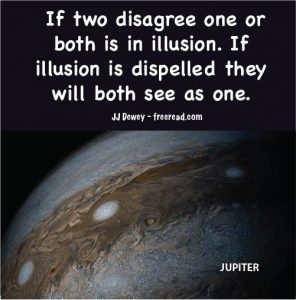 Comment: It seems that the teachings of DK and the LDS and Biblical scriptures on the Jews are in conflict with each other. Which is correct?

Some teachers in the East make this demand of students. They tell them to pick one teacher and one main philosophy from which to learn.

Because, even though there are many diverse teachers and philosophies containing much light and truth, each tends to present that truth with a different slant with different words and a different approach.

The concern of the teacher then is that if his student does not focus on first learning all the basics of teacher A and moves on to teacher B that teacher B will seem to be at odds and contradictory to teacher A. Perhaps both teachers will seem equally credible and because of the seeming contradiction the student winds up rejecting both of them. This is counterproductive because both teachers are on the same side, but have different backgrounds and different approaches.

Many of us realize that the religions are just kindergartens, but even so there are many who need to move through them, and for such individuals it is necessary for them to have a one track mindset until they learn the needed lessons. If a person were to attend the LDS church half the time and the Jehovah witnesses the other half he would soon self destruct.

But, when the person graduates from kindergarten and moves on to grade school in spirituality, he can look at the various religions and begin to synthesize them without scrambling his brain.

Djwhal Khul is an oriental trained after the manner of the Tibetans and his way of looking at things is much different than ancient prophets from thousands of years in the past.

Even so, when all is synthesized and the whole is seen, there is very little, if any contradiction.

Here is what DK actually said in November 1948:

“The national thoughtform of any nation is necessarily a powerful entity. You can observe an instance of this in the thoughtform of the Jews which is the most powerful of all because they are not a nation in any true sense but an ancient religion; they have resurrected something which has been dead for many, many centuries and are now attempting to call it a nation. It is as if the ancient Incas and Aztecs suddenly announced themselves as nations in South America and sought to gain recognition; they were great nations and as civilized as were the Jews, possessing a great and beautiful religion. There is always trouble when that which should be past and gone seeks recognition along ancient lines, and this is a lesson which the Zionists must perforce learn.” Discipleship in the New Age, Vol 2, Page 616

Notice that he was not so much writing against the gathering as against the idea of establishing “recognition along ancient lines.”

When Israel rejected the higher law presented by Moses they built and worshipped the golden calf. The world was about to move into the age of Aries and the Israelites were determined to remain behind in Taurus, the bull, or calf. Even in the days of the early Christians, coins have been found linking the Jews to the symbol of Taurus or the bull, indicating that thousands of years after Moses their consciousness still had not progressed to Aries, even though the earth was then in Pisces.

Now even the Christian scriptures agree with this assessment and note that the Jews (as a whole) rejected and still reject the higher law and dispensation of Christ and remain stuck in the past.

Both Djwhal Khul and the Christian scriptures agree that the Jews are stuck in the past with their belief system and need to move into the present. I think they have made some progress over the past couple hundred years and will soon make a leap forward when their true Messiah comes.

In the meantime, many of the problems we see centered around the Jewish nation is due to the idea of the reestablishing the ancient religion instead of moving ahead to one more geared to modern society. While it is true that some Jews are avant guard thinkers, many do want to see a return to the old ways of doing things, even animal sacrifice.

In many ways the Arabs have the same problem so we have an immovable force meeting an irresistible object.

On the other hand, now Israel has been established, they, as a nation, must be judged by their current actions and not the ancient past. In most cases the Muslim nations, and the Palestinians, have drawn first blood and the violence done by Israel has been in reaction to that.

A reader quotes my words from a previous post: “There are times when a wrong is committed toward an individual that was not deserved by anything he did in his past. When this happens the person will in some future time have a similar right or good event happen to him which will compensate, thus serving the demands of justice.”

Comment: This above statement seems to be out of tune with the law of cause and effect. You say there is NO thing that happens without cause and no cause that goes unnoticed without effect. Isn’t your above statement saying that there may well be an effect on a person that he has not deserved from any past? How can this be?

JJ Response: Yes, there are some negative effects that happen to individuals that are not deserved because of some past action. As I said, when this happens other events are set in motion that will eventually balance things out.

Jesus, for instance did not deserve to be crucified because of any personal karma due.

The scriptures tell us why he did submit:

“Looking unto Jesus the author and finisher of our faith; who for the joy that was set before him endured the cross, despising the shame, and is set down at the right hand of the throne of God.” Heb 12:2

So, instead of being forced into pain Jesus chose it because of “the joy that was set before him.”

Many disciples endure a lot of suffering and conflict, not because of karma due, but in order to experience the greater joy of service.

In addition to this there are times that ordinary people get in the way of negative events, not because of debts that are due and not because of personal choice. Karma creates a magnetic force that draws events in such a way that most people get what they deserve, but because of free will this does not work out with perfect justice within short increments of time, such as a single lifetime. In the long run perfection is achieved, however.

For instance the magnetism set up may cause a burglar to gravitate toward a homeowner who needs to suffer the results of past misdeeds. Even so, the burglar still has free will and may resist the “force” and pick on an innocent homeowner.

Does this mean that the innocent person is a victim of an event that had no cause?

All cause is initiated by the decision of some intelligence of some entity somewhere. The burglar thus initiated a cause against an innocent person, but also initiates a debt to that person that will be paid with interest in one form or another.

There is a delusionary doctrine circulating almost universally that says, “everything is as it should be.”

There are many things not as they should be in between the eternities, just as there are many strokes not as they should be in the painting of a master as it is being created. But he eventually corrects the undesirable strokes and in the end only the perfect results of the good strokes remain. In the finished product the bad strokes are as if they have never been, except in the memory of the master.

If Leonardo Da Vinci had accepted his imperfect strokes and colors as part of “everything as it should be” the Mona Lisa would have been the Moaning Lisa and no masterpiece would have been possible.