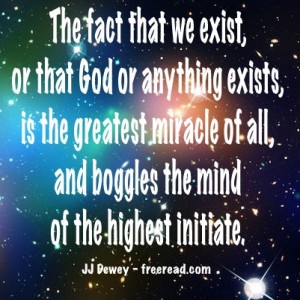 I see the group has been tossing around the question as to “where did God come from?”

Actually the answer has been in the Bible for thousands of years. It says in Habakkuk 3:3 that:

That doesn’t quite satisfy you say. You want more? All right. I just thought I’d try something easy first.

As many of you know I wrote a treatise about creation in the beginning of the Molecular Relationship. In this I took us back to a point which I called Purpose which lies beyond time and space, but which vibrates and creates the wavelength (“strings” as they are currently called) which is the building block of all form.

This is an interesting question that has been on the minds of humanity since they have learned to think. In fact if ones goes outside and looks up at the stars and then at the earth he cannot help but realize that the greatest miracle of all is that anything exists at all. The fact that something is here to be observed and there are observers to take it all in is just as marvelous as is the obvious fact that there is some intelligence behind manifestation.

After contemplating the great mystery many philosophers just throw up their hands and say: “The mystery of Godliness, how great it is!”

That said, let us examine the First Cause.

First Cause… This is a term often used as a description (or name) of God.

But has anyone ever stopped to ask if this is an appropriate title to apply to the One Great Life?

Let us use some reason here.

If God is eternal then He could not be First Cause for First Cause can only be if there was a beginning to all existence.

Understanding that there is no such thing as First Cause is a Key to understanding where God came from.

If there is no First Cause then where did Cause come from?

The answer is: Cause is here BE-CAUSE.

Ponder on this word, “because.” When you are asked a question as to why a thing is and you know it is but not sure why – what do you say?

Cause and effect exist BECAUSE.

Cause and effect never had a beginning and will never have an end. It is the one principle which just is and this principle evolves all intelligence in the universe, even those who are called the Gods. In fact, if we want to find the one God that moves the universe we must look to cause and effect. When cause and effect ceased being random and organization took place in any cycle of creation then the Mind of God came into manifestation.

Think of what would be if there were no cause and effect, even for an instant.

There would be nothing. Nothing at all.

The fact that there is something in existence testifies to the fact that Cause and Effect is eternal, without beginning or end.

When the universe folds up and goes into the great pralaya, cause and effect does not disappear. The great rest is merely an effect of previous causes which lays the groundwork for a new cause.

The life of God and our lives (which are in the image of God) live and evolve in the universe of cause and effect.

Don’t ask me why cause and effect is something that just is. Just be thankful that it is.

Just take advantage of the principle, make true decisions and BE a CAUSE.

I was trying to daydream, but my mind kept wandering. Steven Wright