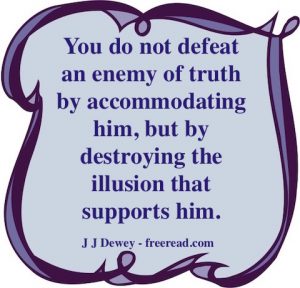 The Abomination of Desolation

A reader commented that she was attending a Bible study class composed of orthodox Christians. The subject of the Abomination of Desolation came up and the standard interpretation of a future antichrist showing up in the future temple in Jerusalem was presented. She offered another view which caused a major upset in the group. She was curious about my thinking on the matter.

This is a subject on which we could spend considerable time so I will have to give you the short answer.

As I explained earlier the ancient Jews believed that the scriptures had what was believed to be the “body, soul and spirit” to them, meaning that there were at least three levels to interpreting them. Others wet so far as to say there were seven levels of interpretation.

Actually the number of levels depend of the depth of the thought behind the words of the initiator. The words of Christ are the closest in the scripture to Spirit and would have the highest number of levels whereas the more mundane historical account of Numbers would not have so many.

One of the big questions Bible scholars have about Chapter 24 of Matthew is whether it applied to the first century of the early church or to our time at the end of the age.

The answer is that both are correct.

Because when words of Spirit are spoken they “shall not pass away” as Jesus said.

Now how can it be that a prophecy cannot pass away? Once it is fulfilled have not the words fulfilled their purpose and no longer applicable?

Words of Spirit do not pass away and cyclically return and become applicable again.

In the past I have commented on quite as few verses of Matthew 24. When I did I wrote about the interpretation as it applies to our present and future, but the chapter applies to both the ending of the age of Aries influence (as was occurring in the time of Jesus) and then again it refers to the present end of the age of Pisces and the beginning of Aquarius as is now transpiring.

When Jesus related the predictions to the Apostles they saw it as applying to their own day, not the far future.

Imagine a teacher speaking to students today and saying: “you shall hear of wars and rumors of wars.” Do you think they would think the teacher is peaking of a period of around 4,000 AD? No. The students would assume he was speaking of no more than 100 years in the future. Few realize that many of the apostles thought the end of the world was near as evidenced from these scriptures:

“For then must he often have suffered since the foundation of the world: but now once in the END OF THE WORLD hath he appeared to put away sin by the sacrifice of himself.” Heb 9:26

“But THE END OF ALL THINGS IS AT HAND: be ye therefore sober, and watch unto prayer.” I Peter 4:7

Then, even Jesus is quoted as saying:

That said let us first look at the scripture through the eyes of the early church as it applied to their day. It reads:

“And this gospel of the kingdom shall be preached in all the world for a witness unto all nations; and then shall the end come. When ye therefore shall see the abomination of desolation, spoken of by Daniel the prophet, stand in the holy place, (whoso readeth, let him understand:) Then let them which be in Judaea flee into the mountains: Let him which is on the housetop not come down to take any thing out of his house:

“Neither let him which is in the field return back to take his clothes. And woe unto them that are with child, and to them that give suck in those days! But pray ye that your flight be not in the winter, neither on the sabbath day: For then shall be great tribulation, such as was not since the beginning of the world to this time, no, nor ever shall be.” Matt 24:14-21

Here Jesus warned the disciples the an abomination which brings desolation would be the beginning of great tribulation.

To understand what this is we must ask, what is considered most abominable in the scriptures?

The answer is quite simple. It is any person, place or thing that is substituted for and takes the place of the true God. In other words, it is disobedience to the commandment that “thou shalt not have any Gods before me.”

This abomination existed in the days of the early Christians in the reign of the Caesars.

Rome did not only conquer the bodies of men, but captured their minds as well and for the first time men began to worship the State almost as if it were a god. Because the state of Rome was to be revered many of its conquests were bloodless and the once great kingdom of Greece joined in with Rome through their own freewill. All life, liberty, and freedom were eventually dedicated to the State, the great protector. All who failed to do this were traitors. Eventually, the emperor became identified as a symbol of the State and was to be worshipped, for worshipping him was to worship the State. The emperor was eventually called Caesar Agustus. Agustus is equivalent to the Greek which we translate as Lord when Christians say “Jesus is Lord”, or “Lord God.”

There came a time that if a Christian refused to acknowledge that Caesar was Lord (Agustus), but that Jesus was Lord instead that he was killed. This was indeed an abomination.

So, what was the desolation?

Just a few verses earlier Jesus gave a hint. Matt “Behold, your (the temple) house is left unto you desolate. And Jesus went out, and departed from the temple: and his disciples came to him for to shew him the buildings of the temple. And Jesus said unto them, See ye not all these things? verily I say unto you, There shall not be left here one stone upon another, that shall not be thrown down.” Matt 23:38 & Matt 24:1-2

Here he tells the disciples that the coming desolation will be the destruction of the holy temple.

What will cause the desolation is clarified by Luke: “And when ye shall see Jerusalem compassed with armies, then know that the desolation thereof is nigh.

That which will then bring the desolation will be “armies” surround Jerusalem. This is the sign that the Christians were to flee.

So what do we have so far?

Jesus is predicting a time in which one who will represent a false God (the abomination) will invade Jerusalem and bring desolation to the temple.

Was the prophecy fulfilled?

Titus encompassed Jerusalem in 70 AD, then invaded and destroyed the temple. In doing so he killed around a million Jews – a horrific number for that age. The Christians were not so effected. Christian historians tell us that when Titus encompassed Jerusalem they considered it a sign of the fulfillment of the prophesy of Jesus and fled, just as they were commanded. Hence there is not a record of even one Christian being killed in the siege.

The Jews were not so lucky for they ignored the warning of Jesus and stayed to defend their temple and city.

After a great struggle Titus took the temple and (according to Josephus) was proclaimed a God by the Romans. Not only did this abomination occur but Roman idols were placed in the temple. This great edifice was then looted and destroyed, or made into a desolation and has not been rebuilt since.

Question: In our modern age there has been another abomination that has brought desolation. Who was this man and how does this event in history correspond to the prophecy?

Hint: Remember that in different cycles various words of the scriptures may have differing symbolic meanings.

When I woke up this morning my girlfriend asked me, “Did you sleep good?” I said, “No, I made a few mistakes.” Steven Wright