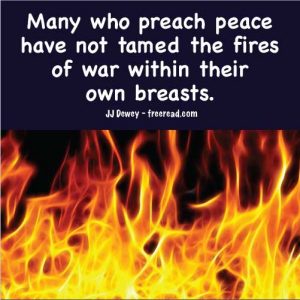 I was asked to elaborate on what an astral war is.

To understand, it helps to expand on a comment DK made about evil. He stated that one of the goals of the hierarchy is to elevate evil to a higher level. In other words, that which is the good in one age may become the evil in another. For instance, in ancient Rome slavery was seen as a “good,” a necessary institution to sustain a civilized world. Today slavery is almost universally recognized as evil. In the more civilized countries the old slavery is so rare that it is no longer an evil to fight. Instead, this evil is now taking a higher form and many are recognizing the existence of the evil of slavery in other forms such as too much debt, too much taxation, too many laws, too much control by religious, civil and business organizations etc.

Slavery is just one evil. War is another that plagues us. Even though war can bring a good result (WWII for example) most will agree that the process of physical war itself is indeed as an evil plague that has brought much pain to the world over the ages.

Just as it was with other evils such as slavery, the goal of the Hierarchy as far as war is concerned is to not eliminate it, for that is not currently possible, but to move it to its next level. In other words, the goal is to move war from the physical level to the astral and then later move it from the astral to the plane of the mind. In that far away time when war moves beyond the plane of the mind war will cease as we can understand it but will incarnate again in a future system.

When war securely moves from the physical to the astral we will have peace on earth as far as physical war is concerned, but it will be waged on the astral, or emotional plane, with greater intensity than dreamed of in ages past.

Currently we are on the cusp between two ages. The achievement of physical stability on the earth so physical war is rare is one of the expectations of this new and unique age which is Aquarius within an even greater cycle of Aquarius. Instead of this Aquarius being one age out of twelve it is Aquarius-Aquarius, or one age out of 144 ages. Therefore, this cusp we are in marks an extremely important turning point in our history – with the most powerful Aquarian energies in over 300,000 years.

Because we are in the transition phase we are still dealing with physical war while seeing a increase of astral or emotional war.

What is an astral war? As most of you know the word “astral” refers to the emotional world. An astral war is one that is fought out through the exchange of feelings and those philosophies to which feelings are strongly attached. Some mental energy is always at play in an astral war, but the polarization is in the feeling world rather than in the realm of the mind.

As most of us are aware the war dealing with abortion is not fought out in physical battles but in heated emotional confrontation.

Let us look at the emotional attachment of both sides.

The conservative side: These people “feel” that God does not want abortion, that killing a fetus, however developed, is as evil as killing a human being.

It is interesting that the Bible says nothing to support this idea and there is no scientific evidence to support it. Therefore the conservative belief on this matter is based on feeling rather than a mental deduction, though they do have a point that the fetus is alive.

The liberal side: These people feel that a fetus is no more than extra tissue that has no value as human life. Removing this fetus is no more evil than cutting your hair, for it is not alive as a human being. Because it is not alive one should not be inconvenienced by an unwanted pregnancy. If one wants to get rid of an unwanted pregnancy one should do it and feel no worse than cutting one’s hair. Free choice is the issue, not any right an unborn should have.

Again, it is interesting that this side also arrives at their view from an emotional attachment and have no evidence to back up their argument.

They maintain that there is no human life in the womb, but how do they know this? They do not even claim to know it, but instead they feel it. Do they have any scientific evidence that human life begins after birth or did they get some revelation from God on the matter?

No. They are in just as much ignorance on the matter as the conservatives they criticize.

The truth of the matter is that neither side has any true knowledge of when life begins or the value of that physical life in the womb in the eyes of God. Both sides feel they are right and they have such feelings because it supports their belief system. Both sides see the other as evil and make non violent war (except for a few crackpots) using all means at their disposal.

Both sides are fighting for the triumph of their feelings – not of their wisdom/mental nature.

Of course, the truth lies in neither of the extremes, but in the middle way where judgment is made based on true facts.

Those who use the Bible to teach that God is against all wars are mislead indeed.

The basic principle is given in this scripture:

“To every thing there is a season, and a time to every purpose under the heaven:

Here we are clearly told that there is a time and place for all things, even “a time of war,” as well as “a time to kill.”

While it is true that Jesus has been called the prince of peace we are also told that “The LORD is a man of war: the LORD is his name.” Exodus15:3

Here is another one:

“The LORD shall go forth as a mighty man, he shall stir up jealousy LIKE A MAN OF WAR: he shall cry, yea, roar; he shall prevail against his enemies.” Isa 42:13

A principle for going to war is thus stated: “And if ye go to war in your land against the enemy that oppresseth you, then ye shall blow an alarm with the trumpets; and ye shall be remembered before the LORD your God, and ye shall be saved from your enemies.” Numbers10:9

Thus we see that the Bible gives oppression as a reason to go to war. This was the justified reason for the revolutionary war in America, for instance.

Old testament stuff you say? Let us then move to the new:

“And there was war in heaven: Michael and his angels fought against the dragon; and the dragon fought and his angels, And prevailed not; neither was their place found any more in heaven. And the great dragon was cast out, that old serpent, called the Devil, and Satan, which deceiveth the whole world: he was cast out into the earth, and his angels were cast out with him.” Rev 12:7-9

The archangel Michael made war against the dragon so peace could once again be maintained in heaven. According to pacifists he should have allowed the dragon to upsurge the power of God and do what he willed and offer no resistance.

“These shall make war with the Lamb, and the Lamb shall overcome them: for he is Lord of lords, and King of kings: and they that are with him are called, and chosen, and faithful.” Rev 17:14

When the lamb (the Christ) is attacked does he do nothing? No He “overcomes” his enemies.

How does he do this?

“And I saw heaven opened, and behold a white horse; and he that sat upon him (Christ) was called Faithful and True, and in righteousness he doth judge and MAKE WAR.” Rev 19:11

Christ overcomes his enemies my making right use (righteousness) of war.

If we move to modern esoteric literature one would be hard pressed to justify a black and white pacifist attitude. DK maintains that pacifists often do more harm than good and would allow evil to triumph while good men give their life’s blood to allow then the opportunity to continue their existence. DK supported the war of the Allies against the Axis powers from which good definitely did come. He also supported the atomic bombing of Hiroshima and Nagasaki. Japan, Italy and Germany were freed from tyrants and now enjoy much more freedom than before the war. The rest of the world is freed from the totalitarian threat that existed at that time.

Let me quote again from a Master of Wisdom:

“The second point upon which I would touch is the arguments brought out by the pacifists of the world. All true and good people are pacifically minded and all hate war. This is a fact which the academic idealist and pacifist often forgets. Such people tell us that two wrongs do not make a right; and to meet murder with murder (which is their definition of war) is sinful; that war is evil (which no one denies) and that one must not take part in it. They contend that thinking thoughts of peace and of love can put the world straight and end the war. Such people, fighting the existent fact of war, usually do little or nothing concrete to right the wrongs which are responsible for the war, and permit their defence-personal, municipal, national and international-to be undertaken by others. The sincerity of these people cannot be questioned.

“It should be remembered, in countering these ideas and in justifying the fighting spirit of the Christian democracies, that it is motive that counts. War can be and is mass murder, where the motive is wrong. It can be sacrifice and right action, where the motive is right. The slaying of a man in the act of killing the defenceless is not regarded as murder. The principle remains the same, whether it is killing an individual who is murdering, or fighting a nation which is warring on the defenceless. The material means, which evil uses for selfish ends, can also be employed for good purposes. The death of the physical body is a lesser evil than the setting back of civilisation, the thwarting of the divine purposes of the human spirit, the negating of all spiritual teaching, and the control of men’s minds and liberties. War is always evil, but it can be the lesser of two evils, as is the case today (written during World War II).

“The present war, if carried forward to a successful completion by the defeat of the totalitarian powers, constitutes a far lesser evil than the subjugation of many nations to the unparalleled cupidity, the appalling educational process and the defiance of all recognised spiritual values by the Axis powers. If the totalitarian powers should conquer, it would mean years of turmoil and revolt; their victory would result in untold misery.” DK The Externalization of the Hierarchy Pages 179-180