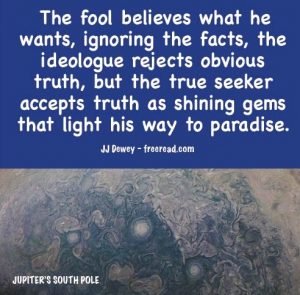 Someone asked me about a quote I posted:

“Anything is possible if you do not know what you are talking about.”

Doesn’t this fly in the face about other teachings that all things are possible?

Actually I got that quote from a book of humor, but even so it still contains much truth. To see the truth in it we must realize that evolving human beings are like pendulums swinging back and forth between the two extremes.

On one extreme we have the person whose “mind slays the real” and he doesn’t believe anything difficult is possible if he has not yet witnessed such a thing.

Then on the other hand, you have the faithful believer who thinks that anything is immediately possible just because he believes it so.

Both extremes are in illusion. The first illusion is obvious. We have all known skeptics who have been wrong.

I remember when I was a boy when many people thought we would never go to the moon. I was always predicting that we would and old timers thought I had a wild imagination.

Then someone in the church happen to ask me that question and I said yes.

Then the guy told me that I was wrong because a Mormon Apostle (Joseph Fielding Smith, who later became the prophet) said point blank that we would never go to the moon. I told him that the authority was wrong and that I believed we would go and in the not too distant future – (this was about 1959).

The guy about passed out for I do not think he had ever seen a member of the church disagree with the General Authorities of the Church. On hindsight, I guess I was lucky they didn’t kick me out way back then for not falling in line.

Then on the other extreme we have people who expect to materialize all their dreams with no other effort on their part other than thinking or meditating about it. There are a lot of people expecting to become millionaires within months because they simply believe or expect to win the lottery.

Now it is true that anything is possible, but there are always conditions that have to be met before the unmanifest becomes manifest.

For instance, it is possible for any of us to make a million, but it is virtually impossible for the average guy to manifest a million dollars in a short period by just thinking about it. For these type of people, anything is possible in their mind because they do not know what they are talking about. They have a simplistic and incomplete view of how things work and what they view as immediately possible is full of illusion and self-deceit.

The true disciple believes that all things are possible but when he bites off a difficult project he does more than just believe. He seeks to understand the time frame involved in the manifestation and then to incorporate all the steps necessary to make his dream a reality.

Perhaps I could reword the thought:

Anything you believe is possible if you are willing to find the steps to manifest that belief. Then after the correct steps are found you must be willing to take those steps, else your belief will become a fading dream.

I thought I would make a couple additional comments on a recent post. The reader asked why we should seek for spiritual healing or intervention when there is karma to be paid off. Wouldn’t that set aside the law of cause and effect?

Alice A. Bailey gives an interesting statement as follows:

Danger from the Dark Brothers.

“I think I gave you earlier practically all that I can as yet impart anent the Brothers of Darkness, as they are sometimes termed. I only want at this point to lay emphasis upon the fact that no danger need be feared by the average student from this source. It is only as discipleship is approached and a man stands out ahead of his fellows as an instrument of the White Brotherhood that he attracts the attention of those who seek to withstand. When through application to meditation, and power and activity in service, a man has developed his vehicles to a point of real achievement, then his vibrations set in motion matters of a specific kind, and he learns to work with that matter, to manipulate the fluids, and to control the builders. In so doing he encroaches on the domain of those who work with the forces of involution and thus he may bring attack upon himself. This attack may be directed against any of his three vehicles and may be of different kinds. Let me briefly point out some of the methods employed against a disciple which are the ones which alone concern the student of these letters:

“Definite attack on the physical body. All kinds of means are employed to hinder the usefulness of the disciple through disease or the crippling of his physical body. Not all accidents are the result of karma, for the disciple has usually surmounted a good deal of that type of karma and is thus comparatively free from that source of hindrance in active work.” Letters on Occult Meditation, Pages 130-131

All illness is created through cause an effect, of which Karma is an aspect, but not all illness or accidents have their root in Karma (or cause) from an error from a past life.

On the other hand, some illnesses and accidents are arranged by the soul to teach us lessons as well as pay a debt from past karma.

In this case is a healing impossible?

Sometimes yes and sometimes no.

Not long ago I related to you about the first healing miracle I experienced in my life. But then after this happened I found that there were certain people who could not be healed by faith – that to learn a lesson of some kind they had to endure certain maladies.

When I participate in a healing I always try and sense the will of the Spirit as to whether I have permission to heal. There has been times when the no answer was so strong that I could hardly speak. Then other times the healing spirit flows with heavenly bliss.

So if the person has karma to pay will the answer always be no?

Answer: Many times the answer is yes.

Why is that and how will the karma be paid off then?

In this situation the soul sees that the debt can be paid off in loving service much faster than painful suffering. This is why it is so important for all of us to become servants. The true unselfish servant often will experience miraculous healing which will give him more power to serve and thus pay off his debt to humanity quite quickly.