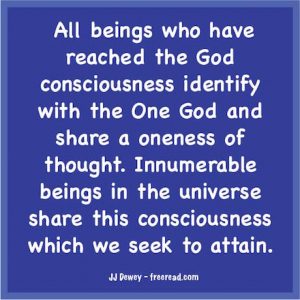 Since the discussion has arisen on Alice A. Bailey, I thought I would let her tell her story in her own words. Below is her account of her first meeting with a Master named Koot Hoomi. Later he turned her over to Djwhal Khul to receive the transmissions essential to laying the foundation teachings for the new age.

It was a Sunday morning. The previous Sunday I had heard a sermon which had aroused all my aspiration. This Sunday, for some reason, I had not gone to Church. All the rest of the house-party had gone and there was no one in the house but myself and the servants. I was sitting in the drawing-room reading. The door opened and in walked a tall man dressed in European clothes (very well cut, I remember) but with a turban on his head. He came in and sat down beside me. I was so petrified at the sight of the turban that I could not make a sound or ask what he was doing there. Then he started to talk. He told me there was some work that it was planned that I could do in the world but that it would entail my changing my disposition very considerably; I would have to give up being such an unpleasant little girl and must try and get some measure of self-control. My future usefulness to Him and to the world was dependent upon how I handled myself and the changes I could manage to make. He said that if I could achieve real self-control I could then be trusted and that I would travel all over the world and visit many countries, “doing your Master’s work all the time.” Those words have rung in my ears ever since. He emphasized that it all depended upon me and what I could do and should do immediately. He added that He would be in touch with me at intervals of several years apart.

The interview was very brief. I said nothing but simply listened whilst He talked quite emphatically. Having said what He had come to say, He got up and walked out, after pausing at the door for a minute to give me a look which to this day I remember very distinctly. I did not know what to make of it all. When I had recovered from the shock, I was first frightened and thought I was going insane or had been to sleep and dreaming and then I reacted to a feeling of smug satisfaction. I felt that I was like Joan of Arc (at that time my heroine) and that, like her, I was seeing spiritual visions and was consequently set aside for a great work. What it was I could not imagine, but pictured myself as the dramatic and admired teacher of thousands. This is a very common mistake on the part of beginners and I see a lot of it today in connection with various occult groups. People’s sincerity and aspiration do succeed in bringing them some inner, spiritual contact and they then interpret it in terms of personality success and importance. A reaction of over-stimulation. This reaction was succeeded by one in which the criticism He had made of me became uppermost in my mind. I decided that maybe after all I was not in the class of Joan of Arc but simply some one who could be nicer than I had been and who could begin to control a rather violent temper. This I started to do. I tried not to be so cross and to control my tongue and for some time became so objectionably good that my family got disturbed; they wondered if I was ill and almost begged me to resume my explosive displays. I was smug and sweet and sentimental.

As the years went by I found that at seven years intervals (until I was thirty-five) I had indications of the supervision and interest of this individual. Then in 1915 I discovered who He was and that other people know Him. From then on the relationship has become closer and closer until today I can, at will, contact Him. This willingness to be contacted on the part of a Master is only possible when a disciple is also willing never to avail himself of the opportunity except in moments of real emergency in world service.

I found that this visitor was the Master K. H., the Master Koot Hoomi, a Master Who is very close to the Christ, Who is on the teaching line and Who is an outstanding exponent of the love-wisdom of which the Christ is the full expression. The real value of this experience is not to be found in the fact that I, a young girl called Alice La Trobe-Bateman, had an interview with a Master but in the fact that knowing nothing whatsoever of Their existence, I met one of Them and that He talked with me. The value is to be found also in the fact that everything that He told me came true (after I had tried hard to meet requirements) and because I discovered that He was not the Master Jesus, as I had naturally supposed, but a Master of Whom I could not possibly have heard and one Who was totally unknown to me. Anyway, the Master K. H. is my Master, beloved and real. I have worked for Him ever since I was fifteen years old and I am now one of the senior disciples in His group, or-as it is called esoterically-in His Ashram.

JJ: Thus we see that the Masters she worked with were not a dream or from her subconscious, but individuals residing in physical bodies like ourselves, but with the subtle difference that they are hundreds of years old yet still perpetuate their youth.

I was asked for a definition of metaphysics. Simply put for my use it is physics of the mind. In other words, a scientific approach to thinking and philosophy as opposed to a feeling, often illogical, approach to truth as it exists in many religions. Unfortunately, many religious people believe that a logical approach to the spiritual is misleading or even evil, but as we have shown by the use of the word “faith” in the days of Jesus, that evidence is a key ingredient in the pursuit of truth.