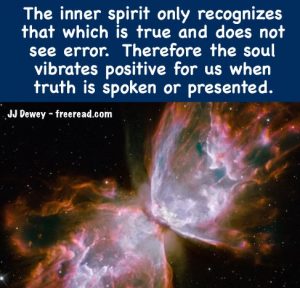 “H. P. Blavatsky and Alice A. Bailey were two controversial teachers who many believe to be in league with the devil. Let us suppose, for the sake of argument, that half of what they teach is not true. If this were the case would it not be better to look for the error so you will not be deceived? OR – is there still an advantage to look for truth as the prime point of focus? If the latter question is true – why is it true?”

A reader makes a good point that it may not be productive to spend time studying material with a low percentage of truth. Even though this may be true, it is also a fact that we often approach new teachings without knowing the percentage of truth therein until we spend some time in study and contemplation.

It does make sense however, to spend your time in the arena where the greatest light lies.

Question: “What is truth? My truth is different than your truth. We progress at different rates so tend to see truths differently than people with greater or lesser understanding. This also means our truths change as we progress..”

It is not the truth that changes, but our perception or our opinion of the truth. The Course in Miracles makes this profound statement.

“The truth is true and nothing else is true.”

There is no such thing as relative truth, higher truth, lower truth or ultimate truth. All truth is merely what it is at the present moment in time and space. Some truth may be in the process of unfolding and from this point of view one may say he is seeing “higher truth.”

Principles which are the language of the soul could be called a higher aspect of truth.

I loved Anni’s answer to the current question:

“I would say that when you seek for the truth and find it your soul will confirm it to you. When you listen and seek further you’ll get a new confirmation and if you listen you will find it much easier to discern all the time because your small still voice gets louder and louder.

“If you seek the errors they are not confirmed as being errors. Spirit recognizes truth not errors. So it is much faster to look for truth and get it confirmed than looking for errors and not getting anything confirmed…”

A master could not have spoken better than this. Let me repeat your most significant statement:

“If you seek the errors they are not confirmed as being errors. Spirit recognizes truth not errors.”

That which is not true is error, or in the true reality – NOTHING. If one spends his life looking for nothing what will he find?

Think of your circle of friends and pick one who is critical and always looking for error and red flags. Does he or she have any truth to teach?

If he does it will most likely not have been discovered while looking for error.

Let us reiterate the Principles of Discovery that we have covered so far:

(1) Take the things you know (for reasonable surety) to be true and use them as a foundation or stepping-stones for testing additional truths.

(2) Be willing to let these foundation beliefs be either altered or dropped as some of them are replaced by higher vision.

(3) The teaching should be in harmony with common sense

(4) It should increase the power of Decision and free will.

(5) It should bring you to a new level of awareness and usefulness.

(6) Seek out true sources of knowledge, study and incorporate them into your life. Knowledge dispels error and illusion.

(7) Gather all the reliable information you can about a subject of interest and try and see the principles suggested by the data. Then draw conclusions and run the conclusions by your soul and see if you receive a response.

(8) Follow all the aspects of the Will of God that is within your perception and your sensitivity to the truth will increase.

(9) The Process of Elimination. Eliminate those things that are definitely not true and contemplate on that which remains.

(A) Communication through perception of the outside world.

(B) Person to person communication.

(C) Communication through the soul.

(11) Truth is in harmony with spiritual principles; therefore we discover that which is true through the application of those principles.

(12) The principle of planting and harvesting.

(13) “The Law of Correspondences.” The principle behind it is “as above so below,” and visa versa.

(15) Discernment. In particular the disciple should seek the power to discern beyond physical seeing so he can see the difference in effects from the astral/emotional world and the world of the soul.

(16) Seek proven authorities and learn from them.

Let us now introduce the next principle

Susan in her interesting post has already led us into this next principle without knowing it when she said:

“Fearing to be deceived seemed to keep people around me in so much darkness and boredom I decided to risk it and learn truth from all sources I could get my hands on. I was asked often, aren’t you afraid you will get to heaven and find out you were wrong? I replied that God knows my heart and would know that it was an honest mistake and I would apologize for my error, would be forgiven and would willingly be taught the truth.”

Susan hit on something here that does indeed block many from the truth. That old enemy fear keeps many from moving toward the light of truth.

What do you suppose are the three basic fears that keep sincere people from discovering and accepting new truth?

The question: What is truth?

Answer: Truth is that which IS at any point in time, space or thought. It is sustained by the consciousness of all that is and exists independent of individual consciousness.

For instance, if you perceived a lady was pregnant and then you were to lapse into unconsciousness it would still be true that she is pregnant, even if you are not conscious to perceive the fact.

The moon would still be in the night sky, even if you traveled to Alpha Centauri where it was out of your sight and consciousness.

Many say that truth is relative, yet no one I have had this conversation with has been able to give me one relative truth. Some point to Newton, yet the truths discovered by Newton were not replaced by Einstein, but added to. Every truth discovered by Newton is still true and has not changed one iota.

The difference between Newton and Einstein is a little like an artist adjusting the grayscale on the computer screen. Let us say that someone gives him a shade of gray for an ad and wants him to match it closely enough so it looks like an exact match. He takes the sample and works at matching it on the computer screen and discovers that 34% grayscale seems to do the trick. He prints up a sample of the matched gray and shows that next to the gray sample to ten people and they all admit that the match is close enough that they cannot tell them apart.

Now what is the absolute truth here? Is it that the match was exact?

Now let us suppose that one of those ten people happen to be one of those individuals who is very detail minded and takes the two samples of gray and examines then under a microscope and actually counts the number of dots per square inch. He makes what is to him an exciting discovery. After painstakingly counting the dots he finds that the original gray was not 34% but 34.10876% gray and the matching sample was only 34.10679% gray.

He approaches the graphic artist and says: “You did not have a true match. I have discovered that there is a difference in the two grays. That difference is .00197%. Why that’s a couple dots per square inch. Are you going to adjust your gray to make an exact match?”

To this the graphic artist replies: “Not necessary for what is true here is that both the grays look the same to all observers and my match is a true working color that accomplishes the intended purpose.”

Now the guy who made the working match of 34% is like Newton. The 34% is close enough that it would be a waste of time to figure any more exact calibration.

The guy who figured the non perceptible difference of .00197% is like Einstein. He discovered a difference in the grays, but such knowledge was not usable or necessary for any art match in today’s world.

Einstein’s discovery that gravity has subtle changes due to bending space, the addition of energy and speed makes such a small difference in the application of Newton’s laws as to negligible on our planet for most purposes.

Therefore it continues to be absolutely true that we can still use Newton’s laws to send a satellite into a pre-calculated orbit. This was true yesterday, is true today and will be true as long as worlds exist.

Let me repeat. Truth is not relative, but our perception and understanding of what is true is indeed relative and subject to change.

If the lady got pregnant in March and announced to a friend that she is with child, but doesn’t look pregnant her friend may disbelieve that she is pregnant and reject that truth. Then she meets her again in July and notices her swollen belly and now accepts because of her new perception.

Like I say this is simple stuff. I am sure many feel it is a waste of time that I am covering the obvious here.

If you were able to remove yourself from the world of duality there would be no truth. Truth can only exist when there is more than one of something. Light can only reveal when a shadow is cast. If you are in space and look through millions of miles of the sun’s rays shining through the void, but with no duality of shadow there is only blackness. Truth only exists in duality and perception of truth also exists there. If there were such a thing as a world with no duality there would be no truth for nothing would be there and truth is something.