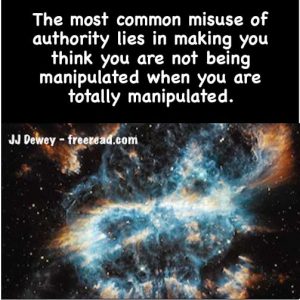 Alice A. Bailey on Authority

My friends. The writings of Alice A. Bailey say some interesting things about correct use of authority. Below is one of the best quotes.

When the glamour of authority transfers itself into the spiritual consciousness of man, we have such a state of affairs as the period of the Inquisition in its worst forms, of Church authority, with the emphasis upon organisation, government and penalties, or the unquestioned rule of some teacher. In its highest forms we have the recognition of the right of the solar Angel, of the soul or ego, to rule. Between these two extremes, which express the infancy of the race and the freedom which comes when mankind achieves its majority and the freedom of the soul, lie all the many types and kinds of intermediate reactions. In illustration of our point, and thus emphasising the glamour aspect as it affects the disciple and the problem which he faces, what do we find? The disciple has freed himself somewhat from the imposed control of an orthodox teaching and from the rule of a teacher. He stands (as far as he can tell) free from such control. Knowing however his essential weakness and the lure of the personality, he is on guard against himself, and against the ancient rules of control and learns steadily to stand on his own feet, to come to his own decisions, to distinguish truth for himself. He learns to choose his way. But, like all persons who have not taken some of the higher initiations, he can (in due time) become enamoured of his freedom, and automatically then swing into the glamour of his ideal of freedom, an ideal which he has created. He becomes the prisoner of freedom. He rejects all rule except that which he calls the “rule of his own soul,” forgetting that his contact with his soul is still intermittent. He demands the right to stand alone. He revels in his new found freedom. He forgets that, having given up the authority of a teaching and of a teacher, he has to learn to accept the authority of the soul and of the group of souls with which he is affiliated through his karma, his ray type, his choice, and the inevitability of the effects of the at-one-ment. Having relinquished the guidance of another person upon the Path, and having his eyes partially opened, he now seeks to tread that Path to the goal, forgetting however that he treads the Path in unison with others, and that there are certain “Rules of the Road” which he must master, and which he must master in unison with others. He has exchanged the individual law for the group law, but does not yet know that group law as it should be known. He marches on as best he can alone, glorying in the freedom from authority which he has succeeded in achieving. He promises himself that he will brook no authority or guidance.

Those of us who are considering him and looking on at him from the clearer heights of attainment see him gradually becoming obscured by wisps of fog and by a glamour which is gradually growing up around him as he becomes a “prisoner of the fog of freedom” and revels in what he deems the fact of his independence. When his sight has cleared, and when his mental aspect is more developed and unfolded, he will know that the Law of the Group must, and will, impose itself upon him, and that the rule of the lower nature has only to be exchanged for the rule of the soul. This is group rule and works under the law of the group. He has struggled out of the mass of seekers of the Road on to the Road itself. He is, therefore, ahead of the masses but he is not alone, even if he thinks that he is. He will discover many others who are travelling the same way with him, and their numbers will steadily increase as he progresses. The rule of interplay, of travel, and of group recognition and work and service will impose themselves upon him until he finds that he is a member of the New Group of World Servers, working under the conditions which are the rules governing their activities. As he learns to travel with them upon the Road, their governing incentives and the techniques of their chosen service will penetrate his consciousness, and automatically and naturally he will begin to obey the higher rhythm and give his assent to the laws which control group life and group consciousness. Finally, he will find himself entering into the silent places where the Masters of the Wisdom dwell, and will work in group rhythm with Them, obeying thus the laws of the spiritual realm, which are the subjective laws of God.

From Glamour a World Problem, Pages 46-48