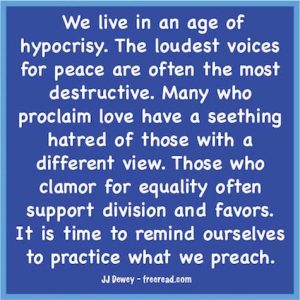 A Prime Ingredient of Goodwill

We have recently introduced the Declaration of Goodwill and are in the process of fine tuning it before we promote it on a larger scale.

One of the main points emphasized that will help with goodwill is the elimination of using derogatory names thrown at each other, commonly called “name-calling.” This is emphasized because name calling is one of the prime causes of negative feelings of one person or group toward another. If this process can be significantly reduced then that alone could take us half way to reasonable goodwill.

First, let us clarify what is meant by negative name calling. Quite simply it is this: A name or description of another to which the person does not identify with and feels insulted at being called such. The name called has intention to insult and the sender is aware that the name will not be favorably accepted.

The most common of such names are liar, hypocrite, hater, racist, bigot, the N-word, homophobe… The list could go on, but the point is that few if any think the calling of these names is justified and have ill will, not goodwill, toward those who do use such names.

Just call a person a liar one time and there is a strong probability he or she will loath you for the rest of his life. You may think your accusation is correct, but the accused may see it as completely unjust and just plain mean.

Some may think we should not make a blanket rejection of name calling because there seems to be times when the person’s sin is so egregious that he deserves to be called a liar, hypocrite or whatever.

Here’s the problem with that idea. When most any person calls another a negative name he will just about always think he is justified and the guy deserves it. If we say a little is okay then the little will be turned into a lot because each person thinks his judgment is just fine. This is why negative name calling needs to be met with disapproval in all instances. There is no supreme judge as to what is justified and what is not.

Perhaps I can set the example here. Not once in my life have I resorted to name calling toward any individual far as I can remember. I have made it a policy to avoid such attacks and it has served me well.

Let us examine the most common word used in negative name calling which is probably “liar.”

The problem with this (and other name-calling) is that everyone has told some kind of lie sometime in their lives. This means you could call anyone a liar and be technically correct.

But when using the encompassing word liar in relation to an individual you are not just pointing to one or two isolated untruths, but you are categorizing the whole of the person as a liar, as if this is what he is and nothing he says should he trusted.

Maybe the lie was just a mistake, or maybe it was the first lie in years or maybe the attacker was the one mistaken and to be stereotyped as an all around liar s is always seen as an insult. Whether the person deserves it of not the attack always does more harm than good as far as the promotion of goodwill is concerned.

If you think then that another is telling a lie that needs corrected then what should you do? Should we just let the lie go unexposed and perhaps do much harm?

Of course not, but name calling is not the answer. I do not know how many times I have seen someone called a liar and I have been left to think, “I wonder what his lies were or if they are really lies.”

Just calling someone a liar or any other name does little to expose the real problem.

What then does reveal that which needs correction?

The answer (concerning a lie): A description of what is not true followed by that which is true.

For instance, suppose another says something like this: “I can’t stand that politician Bob Smith. Did you know he hates little puppies?”

Now you are very familiar with Mr. Smith and you happen to know he is an animal lover. You may be tempted to call your friend a liar, but realize it will just alienate him so you say this: “I’m familiar with Bob and know he loves dogs so I am wondering where you came up with this idea. Do you have any evidence of this?”

Now instead of feeling insulted which results in more attack your friend is forced to examine his own thoughts and there is a chance he may realize his lie.

Confronting the attacker with truth is the best means of diffusion. Most anything is better than just categorizing another as a liar as if that is all he is all the time. Simply saying “I believe that statement is a lie or not true is better than calling the person a liar for you are dealing with the statement, instead of stereotyping the person. To describe the untruth and present the truth as mentioned earlier, however, is the best approach.

The much less destructive approach of analyzing the words of an attacker rather than attacking back can be used with any type of name calling. For instance, if you see hypocrisy instead of declaring the guy a hypocrite remind him that his specific action does not seem to be in harmony with what he claims to believe.

One of the problems in applying this principle correctly is we live in an age of high sensitivity and people are offended over many things that were just passed over a generation or two ago.

The older generation will often use words they think are harmless that offends the younger generation.

Words that are unintentionally offensive are not part of the main problem. Of course, if a person offends another with a certain word and is made aware that such word is offensive then, for the cause of goodwill, he should stop using that word in relation to that individual. For instance, a trans person may be born a “he” and desire to be called a “she”. If you learn that “he” is offensive then good manners should dictate that one stop using it in identifying this person.

Negative name calling designed to be insulting, that you know will be rejected by the person attacked is a much bigger obstacle to goodwill than the many unintentional offenses that happen in daily life. If we can eliminate the intentional insults and replaced them with civil dialog we can create a major step forward in establishing goodwill on this planet.