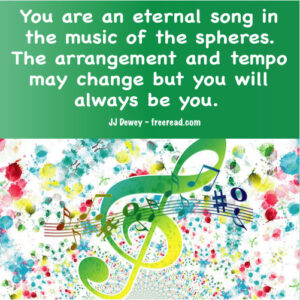 A reader with an LDS background writes:

“Of all the doctrines you espouse, what I have read regarding reincarnation is the hardest to accept.

“Perhaps the biggest problem I have is John saying that not only is there reincarnation, but that we can, and do, switch sexes between lifetimes. I can fairly swallow the whole getting the personality stripped away between incarnations, but I do have a difficulty with being a guy in some lives and a chick in others.

“One of the things that sticks in my mind is what the LDS Church said in their Family Declaration about gender being a critical part of who we are. I can live with losing my memory, even my personality, but I have a hard time with losing my sex. Even now recalling the idea, it takes off like a lead balloon.

“Let’s say a man and a woman are sealed in the LDS Church, and its the last life for the woman, but the man has two lives to go. In his last life, he decided to be a woman. Then he dies and the both of them are resurrected to eternal life as women.

“Here’s another one: a woman is sealed to a man in the temple and she dies. She comes right back a year later and chooses to be a man this time and then she gets sealed to a woman (like 21 years after her death). Then this woman dies, comes back as a man, and gets sealed to another woman. Are three people going through the eye? (oooh, that’s a good one, isn’t it?)

“Its problematic to say the least.”

JJ Response: There are places in the astral world where every possible reality is played out including eternal marriage, but all these are temporary realities.

For the non-LDS let me clarify that the Mormons believe that those married in the LDS temples can be married for eternity. The LDS heaven is basically to live and procreate with your spouse for eternity until you will create and populate other worlds and become Gods to them.

It is therefore awkward for the standard LDS to accept the doctrine of reincarnation for it is difficult to reconcile with this as well as other doctrines. Before we go into any strange or difficult explanations, we must first ask this question.

Is there marriage in the higher worlds? Was Joseph Smith correct?

Verily it is not correct in the way the church today understands it. There are various sealing orders which bind entities together so they will meet again in this world as well as in higher worlds, but it is not in the neat little package of marriage or the family unit as advertised by the church.

A man and woman are not married for eternity as the church teaches it, but there are eternal relationships which result in eternal increase and eternal progression. The idea that a man and woman live forever on some planet having billions of spirit children as physical children are born here on earth is not correct.

True eternal relationships are through the principle of the Molecular Relationship where a number of entities form molecules which can exist in the world and extend out of this world.

We were not born to heavenly parents in the manner taught by the church, but we were born of Gods, or through the Christ Principle. We started as monadic units of light and truth which was nourished by higher molecular lives and guided through the seven planes until we descended into the physical plane.

Sex is very meaningful on this earth plane, but as we move to the higher planes, form differentiation becomes meaningless and sex is replaced by the principle of giving (male) and receiving (female). We all give and receive in the different places on the path and thus we all switch back and forth between male and female situations.

In the scriptures Christ is called the bridegroom and the church is the bride. In other words, we are all female to Christ regardless of the body in which we find ourselves.

It matters not which life you are on or who claims to seal you to another for the illusions will become unraveled and the true principle of eternal progression, (or Becoming) will eventually be revealed and the way will be prepared to nurture infant souls so they too can attain the human stage and beyond.

Without reincarnation where we experience both sexes, we could not graduate from this sphere, for we must attain knowledge of all things. If one has male lives only (or female) then he would have a huge gap of knowledge concerning half the population of the physical universe and could never rise above all things.

I have written a book proving reincarnation for the LDS called Eternal Lives. You can find it HERE

If you can read this, thank a teacher.  Anonymous teacher