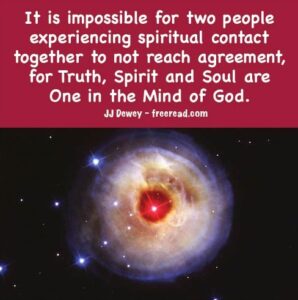 The Receiver – A Parable

Imagine that in the beginning that there is one central broadcasting station for all programs and life experiences. This is called SPIRIT.

Then there is a medium through which all broadcasts are transmitted. This is called SOUL.

Finally, we have the possibility of instruments or vehicles which can pick up that which is transmitted.

When humans began their long period of evolution, they started with no instruments at all except for a computer program that we call instinct which is built into them. This computer program was created at the Central Broadcasting Station and planted in humans to make sure they can survive until they can consciously tune in and receive.

Humanity (men and women) ran on this program for many lifetimes and slowly, by trial and error, began to realize that the program did not answer all of his needs. Meanwhile, the Central Station continues broadcasting and the waves pass through them, but until they develop receiving instruments, they cannot clearly intercept the higher communication.

Then every once in a while, when the individual was still, he sensed that there was more than the program, that there is new material of which to become aware. In his moments of stillness, he thinks he feels the vibration of the broadcast (soul) passing through his body. The feeling is so slight that the first of many times he senses it he dismisses it as his imagination, but finally he becomes convinced that there has to be something more out there. He is now weary of just running on his preprogrammed material and reasons that if indeed there is a Creator out there then there has to be more to receive, or life would not be worth living, and he should just self-destruct.

As the individual bumps into dead end after dead end, because of the limits of the program, he decides to take a chance and attempt to construct some type of receiving device to receive the Central Broadcast that he has dimly sensed.

Then for a long period of time he experiments with hundreds of mechanical listening devices that he attaches to his ear. Some of them amplified noise and regular sounds, and there were many times that he thought he was hearing from the Central Station, but time after time he learned that he was deceived. Several times his friends, who thought he was crazy, played tricks on him, another time a charlatan passing through town deceived him and then there were many times that other people claimed to have made the breakthrough. These beastly individuals claimed that only they could receive from the Central Station and if anyone wanted to know what the broadcast was only they could be trusted to reveal it.

The seeker continued to search but there were many times he doubted himself and thought that maybe he was crazy for trying to receive from the Central Station because of the ridicule he received from his friends and developing authorities who claimed that only certain appointed ones could ever receive.

The seeker made many mistakes and had many self-doubts, but the idea of the search never completely left his mind and one day as he was in contemplation under a tree he saw a tremendous bolt of lightning strike in the distance.

After the strike a large amount of electricity filled the air and it seemed to the guy that for a short moment he was sensing the broadcast waves. It seemed as if he saw things in his mind and heard things with his ears that he had never experienced before.

After the storm subsided he roused himself with joy for he realized that he had found the missing ingredient for reception, which was electricity (soul energy).

He went back to his workshop and gathered together all the physical materials that did not seem to work before and experimented by adding the element of electricity to them. Finally, after much work and frustration he put together a primitive radio receiver. There was a lot of static, the sound was bad and sometimes it worked and sometimes it did not, but finally he was sure that he was receiving something, for the words were clearly meaningful.

He still did not trust his instrument completely because in the past he had been deceived by people playing tricks on him and perhaps this was another deception. He listened to the broadcast in private and tested it again and again and finally concluded that no deceiver could come up with such new and refreshing material that was not in his original program.

Upon concluding that he was truly receiving, he had so much joy that he decided to share his good fortune with his friends. He took his receiving instrument and showed it to them. They were curious and asked for a demonstration. The seeker turned it on and after some static a couple of sentences came through.

“Hear what?” said his friends. “All we heard was a bunch of noise.”

The guy was beside himself. His friends must have not been paying attention. “There it is again!” he said.

“What do you mean?” said his friends. “All that is coming across is just noise. We think this quest of yours has scrambled your brain. Perhaps you need professional help.”

At this he realized that only he could hear the words on the receiver, that for some reason the instrument was in tune with him and that each person would have to eventually create his own medium of reception.

Night after night the he listened to his new device and wrote down the information. Then after a period of time another idea occurred to him:

“I know how I can prove beyond any doubt that I am receiving from the Central Station. I will take some of the material I have received and share it with others. Then when they contrast the new material with all the other worn-out programs in circulation, the people will become convinced that I am a true receiver. Then all they have to do is follow the plans I have for instruments and they can then receive everything I do without my help.”

He was enthused about this plan and immediately began teaching the words of Light to all who would listen.

But alas, he was alarmed and disheartened by the reception. Many of his closest friends thought that this new material was not as good as the old program and that even the charlatans had more to offer.

The guy did not give up and he taught others, but their leaders pointed the finger of scorn at him and told their followers that he was an agent of the devil, and the people turned on the heretic and he was lucky to escape without injury.

Then he retreated for a long period of time into his quiet chambers and concluded that if no one else was going to benefit by his discovery at least he would. The first thing he did was to work on his receiver, and after a period of time he was able to eliminate the static and blank periods so the broadcast came through loud and clear on a consistent basis. But he did not give up here. He continued to experiment until he developed the equivalent of a primitive black and white TV. It had such a small screen and so much snow that images were difficult to make out, but he continued working until he had a larger screen with clear images and sound.

Later, he realized that color would add even more beauty to his learning pleasure and that was also perfected.

Finally, everything was fined tuned and the pilgrim learned and learned and learned until he felt he was about to burst at the seams with knowledge. He reached a point where learning was no longer important. What good was all this knowledge if he had no one to share it with?

The big question was with whom could he share his knowledge? Everyone seemed to be satisfied with either their original program or with the teachings of illusion. What was he to do?

He sat silently for many moments in front of the TV contemplating the answer when he heard the Words of Light come through loud and true.

He perked up. Over his transmitter he heard the answer. Why didn’t he think of this before? There has to be others who have made some type of receiver and they have also retreated into a solitary space because of rebuke from their peers.

He then went on a quest to find others like himself who have been receiving from the Central Station. “How will I find them,” he asked himself? And then a plan came to his mind.

“I will go forth again and teach things that do not conflict with the program of the ordinary people, yet I shall plant within these teachings higher knowledge that will pass over the heads of all but the other receivers who can also comprehend.”

He then went out into the world and taught all who would listen to his parables containing hidden meaning, and sure enough there were other receivers with eyes to see and ears to hear who recognized certain words and concepts they had themselves received from the Central Broadcasting Station. As they recognized that this man was no ordinary teacher the other receivers began to gather with him. As they gathered, they all discovered that they had all built receivers of different grades and qualities. Those with better receivers began to help and instruct their brothers and sisters so all who desired could receive with the quality and picture that was desired.

After a period of time, the unexpected happened. As the receivers were all gathered together in one body a message of great Whole-liness came to them all from the Central Station.

They heard a Master speak these great words: “The time has come that the sender and the receiver become One.” They then heard the words of most hallowed instructions that could not be written.

Those who followed the words blended with the Central Station and the Central Station Blended with them in Oneness. Now they discovered that it was no longer necessary to have an instrument of reception, for the Spiritual Center was now in them and they were in the Center. They could walk among humanity and teach all things or they could explore new worlds. All things were now theirs and their joy was full.

Truly wonderful, the mind of a child is. -Yoda Star Wars: Episode II-Attack of the Clones