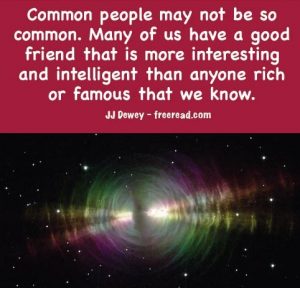 He’s been writing down a lot of his philosophy and publishing it in the local paper here. I keep after him to learn to use a computer and get on the internet but he never gets around to it. Instead he writes all his thoughts down on a yellow legal pad.

I collect his writings for him on my computer to make sure he doesn’t lose them. I’ll post a couple for you below:

Home is the warrior.

Home from the ﬁeld

To rest from his battles,

To lay down his shield.

His arms have known rust,

His bones a deep cold.

Now home is the warrior

The battles were many,

Of some he could tell;

Others left him quiet,

To private to dwell.

And some just as ﬁerce

He strove on alone.

With his armor about him

He lays down to rest.

The strength of the metal

Was his mettle to test.

Some battles were won

And some battles lost.

Often the gift of defeat

His features were cast

In the heat of the strife.

The scars lent their form

In the shape of his life.

A lesson etched at last,

Into a part of him:

To divide was to conquer

To unite was to win.

In the strength of his arm

And the sight of his mind

His soul was reﬂected;

But now his days o’re

For a time things still.

Now home is the warrior

Home from the ﬁeld.

Philosophy is fun, we say. To divide life’s apple is play. We number and name, Though the apple’s the same. Whether divided in twain Or ground up, we gain Perspective. . .from we see the apple To the apple saw us.

Reduced to its primaries, philosophy is a consideration of the relationship between deﬁned quantities and magnitudes as represented within ideas. First, basic postulates are appointed as essentials or “priorities,” then, deductively, a theoretical format evolves. In the input and processing out lie the similarities and differences between all philosophical schools of thought.

It is the study of a moral foundation for applied living by humans who have evolved to the point where they can recognize their own evolution and the direct involvement in the selection of options through the emancipation of self.

Our Declaration of Independence is an example of such a philosophical format. When any philosophy’s postulates error against reality or natural law, or if there is a befuddled interpretation of correct premises, contradictions result. The thinker then must re-examine and readjust accordingly.

Cruel chaos now reigns in this nation. Dictatorial law stymies the ability to adjust. I will not accept any interpretation of law which requires my submission in mind or of body to the present status quo. I am my own man. I can and do “think” for myself. I neither welcome nor appreciate those who wish to foist upon me an immutable system of rules which indicate that the necessary thinking has already been done and that I must now submit to those man-made laws. I am above such law. Aren’t you?

If you allow the unenlightened to do your thinking for you, you will do your living for them.

When, in life’s elastic environment of exoteric and esoteric experience, evolving individuals assume an increasingly able control over

the impact of their surrounds upon themselves and vice versa, they are answering an instinctive call. Mans urge to discover, decipher, and discipline his external and internal universe is inherent. He is by nature an explorer, scientist, and engineer in his physical, psychological and spiritual ﬁelds. His impulse is to be free of limitations to have free dominion. The egg tooth by which he can break into that reality is philosophy, “the search for the real, the science of thought, and the design of a healthy and constructive life”.

As a man increases his control over his appetites and passions -“his demons within” – and makes them work for him, he becomes a moral man. As he disallows outside inﬂuences to bedevil him, he becomes a liberated man. When he has become accomplished at both, he is a master of devils. He has unfettered dominion in his life. He has freedom.

What some assume to be freedom is its antithesis. The unrestrained acting out on belief, passion and desire enslaves a man to his own demons. When you try to force your brother, you are in a very real sense rattling the chains of your own bondage. Brothers can and should work together for their mutual beneﬁt, but each must preserve his autonomy 1) physically, 2) mentally and 3) spiritually if the word freedom is to have meaning in his life.

Eve, the ﬁgurative and legendary “mother” of mankind, is representative of physical matter, just as Adam reﬂects the spiritual or “father” aspect of creation. Incorporate within each man is an inher•ent drive to improve his control over self, struggling toward levels at which his higher essence gains and maintains ascendancy over his more coarse physical being. In other terms, he is designed to evolve (Eve/volve). In opposition, a man experiences the evil (Eve/ill), that tradition tells a beguiled Eve allowed into this world, which in reality is no more or less the deception and consequent retardation a man experiences until he transcends his animal nature. Man is born to sin and evil only in the sense that he is still overcoming and is evil only relative to his present understanding and corresponding performance. Ancient Eve as an allegory represents the Eve/ning of men’s animal nature and the dawning of human potential. Hence she is the mother of all humans.

We all share the same reality; we just have different experiences, including different illusions. It is evil to force your illusion on another.

The will to know is an instinctive drive in humans, an incumbent impulse which motivates men to explore their objective and subjective worlds. Education should assist one in pursuing the “need to know” via a rational and self-directive methodology. Religion means “to rebind”, and as men loose old ideas and regrasp higher ideals on their quest to know, they are living their religion. In both science and religion, the “how” and the “why” of existence are pursued, and in conjunction a moral philosophy is forged. Until a man is able to sense and analyze both phenomenon, his thinking is not truly his own. However, independent thought endangers the status quo, and institutionalized authorities instruct with power, not reason. Although the metaphysical “why” is the most human question in the cosmos, it is increasingly left out of public schools. Without religion, teaching, reading, writing, arithmetic, and other disciplines are just sterile presentments, and not nearly an education by half.

Freedom of religion is the right to form philosophical attachments unimpeded by secular authority.

The evolution of consciousness is a journey from awareness to realization for an individual, a group, or an entire race. Whether from the womb of the mother or the cradle of civilization, man & mankind both tread similar paths in like sequence. Man ﬁrst sees & believes, then sees & comprehends, & ﬁnally sees & absorbs knowledge.

In past civilizations, focus on religious planes foreshadowed any scientiﬁc discipline. Astrology antedates astronomy, alchemy preceded chemistry, medicine men practiced before did men of medicine. At ﬁrst science seems to tear down the old gods. These periods of initial enmity between the two forces (religion & science) create social unrest in groups & cause conﬂict in the personal decisions of individuals. This continues until such time as their relative correspondences are seen & understood.

Mankind in-mass is approaching that inevitable point of synthesis. With belief one can imagine moving mountains, with science one can move mountains, by faith mountains are moved. Sans illusion, science & religion are conjoined. There are no contradictions to reality. Humanity is ﬁnally coming-of-age mentally in much the same sense as we ascribe to a young adult achieving his majority. In years, the time frame ratio between a man & mankind is near

200:1. Dating from the advent of Aries 4,000 years ago, the then infant ﬁfth root race, ﬁrst evolved religion as an institution & then during the 2,000 years of Pisces, adolescent humanity saw science also assume institutional proportions. The next step for the now •young adult• human race is the •mind• as an institution. Welcome to the Age of Aquarius! ….the age of the astrologer/astronomer, the religious/scientist, and the man free from illusion in both.

This is just a random sampling of some of his writings to give you an idea of how the real Wayne thinks in his own words. JJ